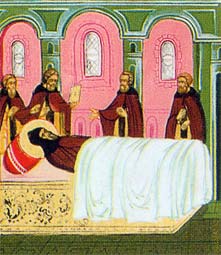 Saint Sabbatius of Solovki came to the St Cyril of White Lake monastery in the year 1396, where he received the monastic tonsure. He there pursued asceticism for a long time, unquestioningly fulfilling all obediences. His humility, gentle love towards the brethren and his strict life distinguished the monk Sabbatius among his fellow ascetics. He soon became burdened by the attention and esteem of the brethren and laity coming to him, and having learned that on Lake Ladoga is the rocky island of Valaam, he decided to settle there.

The brethren of the St Cyril of White Lake monastery were very sad to be parted from their Elder. At Valaam the worldly fame also began to disquiet the humble Elder. Then the monk learned that in the north was the uninhabited island of Solovki, and he began to ask the igumen's blessing to settle there in solitude. But the igumen and the brethren did not want to be separated from their holy Elder.

At the command of God St Sabbatius left the Valaam monastery by night and set off to the shores of the White Sea. When he learned from the local people that the island was two days distant, that on it were many lakes and that no one lived on the island, he was even more eager to settle there. The astonished local people asked the ascetic, whitened with grey hair, how he would live there and what he would eat. "My Master," replied the monk, "gives the fresh strength of youth to the frail, and nourishes the hungry to satiety."

For a certain time St Sabbatius remained at the chapel near the mouth of the Vyg River, in the environs of Soroka. There he encountered St Germanus pursuing asceticism as a hermit, and together they decided to settle upon the island. In a frail boat, praying to God, the Elders set off upon the harsh sea and after three days they reached Solovki Island.

The ascetics settled by the Sekirna hill, where they raised up a cross and built their cells. In the severe conditions of the north, the Elders hallowed the unpopulated island by their exploits. Here also the Enemy of mankind,the devil, tempted the holy Elders. A certain fisherman with his wife, moved with a sense of envy, came somehow to the island and settled near the ascetics. But the Lord did not permit the laypeople to remain near the monks. Two youths in bright garb appeared to the wife of the fisherman and struck her with rods. The fisherman took fright, quickly gathered his things and hastened to return to his former place of residence.

Once, when St Germanus had gone for supplies along the Onega River, St Sabbatius, alone and sensing his impending end, turned to God and prayered that He would grant him to partake of the Holy Mysteries. The monk sailed for two days to the mainland and at ten versts from the Vyg River encountered the igumen Nathanael, who had come to the distant settlement to commune a sick Christian. Igumen Nathanael rejoiced at meeting the monk, fulfilled his wish and heard the account of his exploits on the island. In parting, they agreed to meet at the church along the Vyg River.

Entering the temple, the holy Elder prayerfully gave thanks to God for Communion. He then enclosed himself in a cell located near the church, and began to prepare himself for death. During this time the Novgorod merchant John came to shore and, having venerated the holy icons in church, he went to the holy Elder. Having received his blessing and guidance, he offered the monk a portion of his wealth and was saddened when he heard a refusal. To comfort the merchant, St Sabbatius offered to let him stay over until morning, and promised him prosperity on further journeying. The merchant John, however, hastened to disembark.

Suddenly there was an earthquake, and a storm arose on the sea. Taking fright, the merchant stayed where he was. In the morning when he entered the cell for a blessing, he saw that the Elder was already dead. He and Igumen Nathanael, who had just arrived, buried St Sabbatius at the chapel and wrote a manuscript of his Life. This occurred on September 27, 1435. After thirty years, the relics of St Sabbatius were transferred by St Zosimas (April 17) and the brethren of Solovki Island, placing them in the Transfiguration church. In 1566, the relics of Sts Sabbatius and Zosimas were transferred into a church, named in their honor (August 8).

You abandoned the world and fought the good fight
By hardship, vigil and prayer.
Pray to Christ our God to save our souls, O holy Father Sabbatius!

Fleeing the turmoil of life
You dwelt on an island in the sea.
You took up your cross and followed Christ
Toiling in vigils, fasting and hardships.
You became the adornment of the righteous
And we lovingly celebrate your memory.
Pray to Christ our God
To save our souls, O righteous Sabbatius! 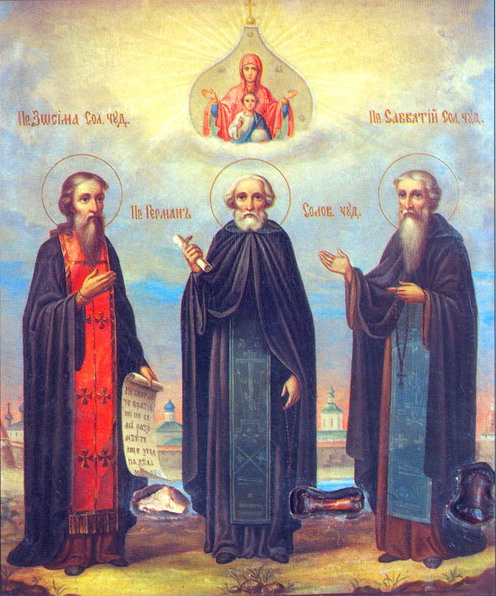