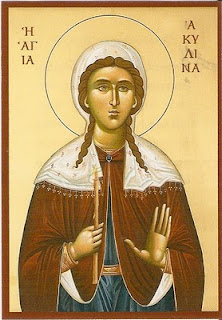 Saint Aquilina (Akylina), the virgin martyr of Christ, was the daughter of pious parents who lived in the village of Zagliberi, Thessalonica in the diocese of St Ardamerios.

One day her father quarreled with a Turkish neighbor (for Turks and Christians lived together in that village), and struck the Turk, killing him. The authorities seized him and brought him to the pasha of Thessalonica to be executed for his crime. Fearing death, the unfortunate man converted to Islam in order to save his life. St Aquilina was still a babe at her mother's breast when this happened. The saint's mother remained a Christian, and she encouraged her daughter to adhere to the Christian Faith, and not to deny Christ.

After some time had passed, the Turks pressured Aquilina's father to make her become a Moslem, too. He said, "Do not worry about my daughter, I'll see to her. I will force her to convert to Islam in due course."

When St Aquilina was eighteen, the Turks urged her father to make his daughter convert to their faith. He said to her, "The other Turks tell me that you must become a Moslem sooner or later. Do it one day sooner so that they will stop bothering me. "

She replied with great courage, "I will never deny the Lord Jesus Christ, Who died on the Cross for our sake. I am prepared to endure tortures, and even death, for love of my Christ."

Seeing that she would not change her mind, her father went to the Turks and said, "I am not able to persuade my daughter to become a Moslem, so you may do as you wish with her."

Hearing this, the Turks became angry, and sent servants to arrest the girl. When the saint's mother saw them seize her daughter, she encouraged her to remain firm in confessing Christ, and to be brave in the face of the torments she was about to endure.

Aquilina replied, "That is my intention, Mother. May God help me. Pray for me."

Then they said farewell with many tears and laments. Servants tied Aquilina with ropes and brought her to the judge. Her mother followed them, but the servants shut the door in her face and left her standing in the courtyard. St Aquilina was taken inside to appear before the judge, and her mother returned home to await the outcome.

The judge asked her, "Will you become a Moslem, you fool?"

She replied, "No, I will never deny my Faith or my Master Christ."

Hearing these things, the judge became angry and ordered the saint to be stripped of her clothes, leaving her in her chemise. Then he ordered them to tie her to a pillar and to beat her with sticks, and it was done. Two servants beat her for a long time, but St Aquilina endured her sufferings with great courage.

Then once again the saint was brought before the judge and the other Turks. They began to flatter her, promising her many things. They even offered her gifts, if only she would deny her Christian Faith, but she regarded earthly riches as worthless. A prominent man among them, having more boldness than the others, said to her, "Become a Moslem, Aquilina, and I will marry you to my son."


When the Turks heard this, they were enraged and tied the saint up as before, beating her for a long time. Then she was untied and questioned for a third time.

Since Aquilina had received so many lashes, her chemise was torn to shreds, and it no longer covered her. The judge said, "You fool! Aren't you ashamed to appear naked before so many people? Become a Moslem, or I'll break your bones one by one."

The holy virgin replied, "What could I possibly want with your faith? Why should I deny Christ?"

The Turks were furious, and this time they beat the saint so mercilessly that they left her for dead. The earth was saturated with her blood, and pieces of her flesh fell to the ground. Finally, they untied her and gave her to a certain Christian who happened to be at that place, and he brought her to her mother's house.

When her mother saw that her daughter was almost dead, she embraced her and asked, "What have you done, my child?"

The martyr opened her eyes with difficulty and said, "Behold, I have preserved the confession of my Faith, just as we agreed."

While she was speaking to her mother, St Aquilina gave her pure soul into God's hands and received the imperishable crown of martyrdom on September 27, 1764.

On the way to the cemetery, St Aquilina's holy relics gave forth a wondrous fragrance which filled the entire road. That night a heavenly light shone upon her tomb like a brilliant star, and the Christians who witnessed this glorified God.