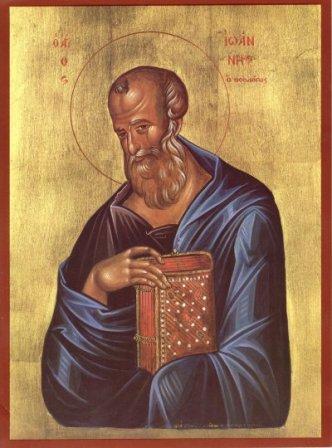 The Holy, Glorious All-laudable Apostle and Evangelist, Virgin, and Beloved Friend of Christ, John the Theologian was the son of Zebedee and Salome, a daughter of St Joseph the Betrothed. He was called by our Lord Jesus Christ to be one of His Apostles at the same time as his elder brother James. This took place at Lake Gennesareth (i.e. the Sea of Galilee). Leaving behind their father, both brothers followed the Lord.

The Apostle John was especially loved by the Savior for his sacrificial love and his virginal purity. After his calling, the Apostle John did not part from the Lord, and he was one of the three apostles who were particularly close to Him. St John the Theologian was present when the Lord restored the daughter of Jairus to life, and he was a witness to the Transfiguration of the Lord on Mount Tabor.

During the Last Supper, he reclined next to the Lord, and laid his head upon His breast. He also asked the name of the Savior's betrayer. The Apostle John followed after the Lord when they led Him bound from the Garden of Gethsemane to the court of the iniquitous High Priests Annas and Caiphas. He was there in the courtyard of the High Priest during the interrogations of his Teacher and he resolutely followed after him on the way to Golgotha, grieving with all his heart.

At the foot of the Cross he stood with the Mother of God and heard the words of the Crucified Lord addressed to Her from the Cross: "Woman, behold Thy son." Then the Lord said to him, "Behold thy Mother" (John 19:26-27). From that moment the Apostle John, like a loving son, concerned himself over the Most Holy Virgin Mary, and he served Her until Her Dormition.

After the Dormition of the Mother of God the Apostle John went to Ephesus and other cities of Asia Minor to preach the Gospel, taking with him his own disciple Prochorus. They boarded a ship, which floundered during a terrible tempest. All the travellers were cast up upon dry ground, and only the Apostle John remained in the depths of the sea. Prochorus wept bitterly, bereft of his spiritual father and guide, and he went on towards Ephesus alone.

On the fourteenth day of his journey he stood at the shore of the sea and saw that the waves had cast a man ashore. Going up to him, he recognized the Apostle John, whom the Lord had preserved alive for fourteen days in the sea. Teacher and disciple went to Ephesus, where the Apostle John preached incessantly to the pagans about Christ. His preaching was accompanied by such numerous and great miracles, that the number of believers increased with each day.

During this time there had begun a persecution of Christians under the emperor Nero (56-68). They took the Apostle John for trial at Rome. St John was sentenced to death for his confession of faith in the Lord Jesus Christ, but the Lord preserved His chosen one. The apostle drank a cup of deadly poison, but he remained alive. Later, he emerged unharmed from a cauldron of boiling oil into which he had been thrown on orders from the torturer.

After this, they sent the Apostle John off to imprisonment to the island of Patmos, where he spent many years. Proceeding along on his way to the place of exile, St John worked many miracles. On the island of Patmos, his preaching and miracles attracted to him all the inhabitants of the island, and he enlightened them with the light of the Gospel. He cast out many devils from the pagan temples, and he healed a great multitude of the sick.

Sorcerers with demonic powers showed great hostility to the preaching of the holy apostle. He especially frightened the chief sorcerer of them all, named Kinops, who boasted that they would destroy the apostle. But the great John, by the grace of God acting through him, destroyed all the demonic artifices to which Kinops resorted, and the haughty sorcerer perished in the depths of the sea.

The Apostle John withdrew with his disciple Prochorus to a desolate height, where he imposed upon himself a three-day fast. As St John prayed the earth quaked and thunder rumbled. Prochorus fell to the ground in fright. The Apostle John lifted him up and told him to write down what he was about to say. "I am the Alpha and the Omega, the beginning and the end, saith the Lord, Who is and Who was and Who is to come, the Almighty" (Rev 1:8), proclaimed the Spirit of God through the Apostle John. Thus in about the year 67 the Book of Revelation was written, known also as the "Apocalypse," of the holy Apostle John the Theologian. In this Book were predictions of the tribulations of the Church and of the end of the world.

After his prolonged exile, the Apostle John received his freedom and returned to Ephesus, where he continued with his activity, instructing Christians to guard against false teachers and their erroneous teachings. In the year 95, the Apostle John wrote his Gospel at Ephesus. He called for all Christians to love the Lord and one another, and by this to fulfill the commands of Christ. The Church calls St John the "Apostle of Love", since he constantly taught that without love man cannot come near to God.

In his three Epistles, St John speaks of the significance of love for God and for neighbor. Already in his old age, he learned of a youth who had strayed from the true path to follow the leader of a band of robbers, so St John went out into the wilderness to seek him. Seeing the holy Elder, the guilty one tried to hide himself, but the Apostle John ran after him and besought him to stop. He promised to take the sins of the youth upon himself, if only he would repent and not bring ruin upon his soul. Shaken by the intense love of the holy Elder, the youth actually did repent and turn his life around.

St John when he was more than a hundred years old. he far outlived the other eyewitnesses of the Lord, and for a long time he remained the only remaining eyewitness of the earthly life of the Savior.

When it was time for the departure of the Apostle John, he went out beyond the city limits of Ephesus with the families of his disciples. He bade them prepare for him a cross-shaped grave, in which he lay, telling his disciples that they should cover him over with the soil. The disciples tearfully kissed their beloved teacher, but not wanting to be disobedient, they fulfilled his bidding. They covered the face of the saint with a cloth and filled in the grave. Learning of this, other disciples of St John came to the place of his burial. When they opened the grave, they found it empty.

The Lord bestowed on His beloved disciple John and John's brother James the name "Sons of Thunder" as an awesome messenger in its cleansing power of the heavenly fire. And precisely by this the Savior pointed out the flaming, fiery, sacrificial character of Christian love, the preacher of which was the Apostle John the Theologian. The eagle, symbol of the lofty heights of his theological thought, is the iconographic symbol of the Evangelist John the Theologian. The appellation "Theologian" is bestown by Holy Church only to St John among the immediate disciples and Apostles of Christ, as being the seer of the mysterious Judgments of God.

Beloved apostle of Christ our God,
hasten to deliver a defenseless people.
He who allowed you to recline on His breast,
receives you as you bow before Him.
Implore Him, John the Theologian,
to disperse the persistent threat from the heathens,
entreating for us peace and great mercy.

Who shall declare your greatness,
O virgin disciple,
for you pour forth wonders and are a source of healings,
and pray for our souls as Theologian and friend of Christ. 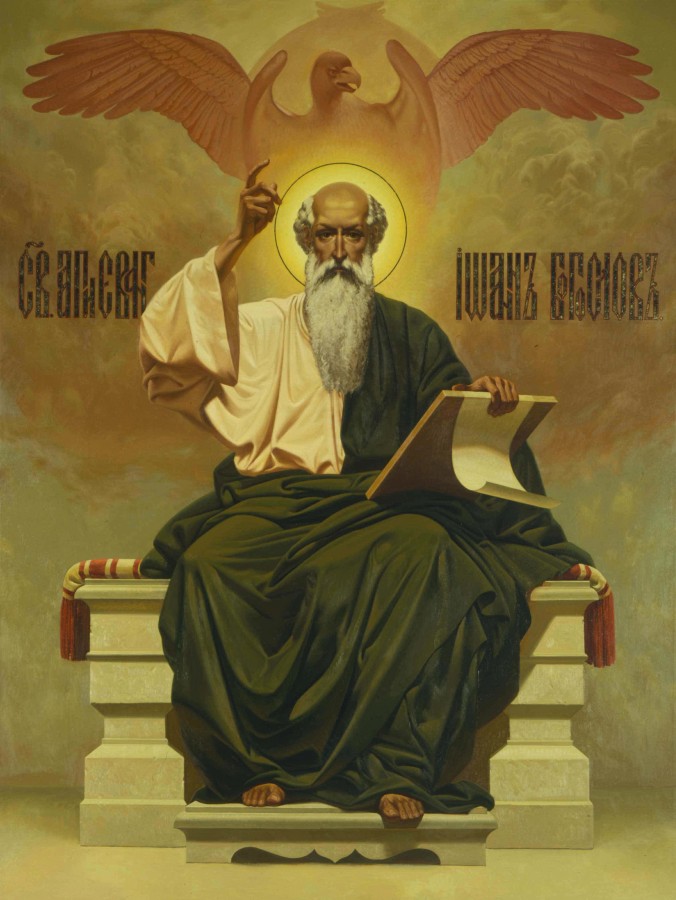