The Conception of St John the Baptist 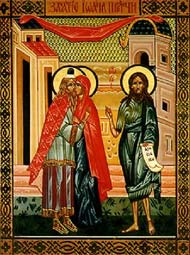 The Conception of the Venerable Prophet, Forerunner and Baptist of the Lord, John: The holy Prophet Malachi prophesied that before the Messiah's birth His Forerunner would appear, and would indicate His coming. The Jews therefore in awaiting the Messiah also awaited the appearance of His Forerunner.

In a city of the hills of Judea in the land of Palestine lived the righteous priest St Zachariah and his wife St Elizabeth, zealously observing the commandments of the Lord. The couple, however, had a misfortune: they remained childless in their old age, and they prayed unceasingly to God to grant them a child.

Once, when St Zachariah took his turn as priest at the Temple of Jerusalem, he went into the Sanctuary to offer incense. Going behind the veil of the Sanctuary, he beheld an angel of God standing at the right side of the altar of incense.

St Zachariah was astonished and halted in fear, but the angel said to him, "Fear not, Zachariah, for your prayer is heard; and your wife Elizabeth will bear you a son, and you shall call his name John." But Zachariah did not believe the words of the heavenly messenger, and then the angel said to him, "I am Gabriel, who stand in the presence of God; and I was sent to speak to you, and to bring you the good news. Behold, you will be silent and unable to speak until the day that these things come to pass, because you did not believe my words...."

Meanwhile, the people were waiting for Zachariah and they were astonished that he had not come out from the Sanctuary after so long a time. And when he did come out, he was supposed to pronounce a blessing upon the people, but could not do so because he had been struck speechless. When Zachariah explained by gestures that he was unable to speak, the people then understood that he had experienced a vision. The prophecy of the Archangel was fulfilled, and Righteous Elizabeth was delivered from her barrenness, and gave birth to John, the Forerunner and Baptist of the Lord.

Rejoice, O barren one, who formerly did not bear a child,
for you have conceived the Lamp of the Sun, who is to illumine the whole universe darkened by blindness.
Rejoice, O Zachariah
and cry out with boldness:
“The prophet of the Most High desires to be born!”

Podoben: “The angelic choir...”
Great Zachariah rejoices with his wife, the far-famed Elizabeth,
for she has fittingly conceived John the Forerunner,
whom an angel announced in gladness;
and whom we rightly honor
as an initiate of the grace of God.