The Holy Martyrs Vera, Nada and Lubov (Faith, Hope and Love), and their mother Sophia 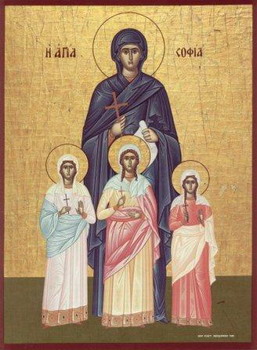 The Holy Martyrs Saint Sophia and her Daughters Faith, Hope and Love were born in Italy. Their mother was a pious Christian widow who named her daughters for the three Christian virtues. Faith was twelve, Hope was ten, and Love was nine. St Sophia raised them in the love of the Lord Jesus Christ. St Sophia and her daughters did not hide their faith in Christ, but openly confessed it before everyone.

An official named Antiochus denounced them to the emperor Hadrian (117-138), who ordered that they be brought to Rome. Realizing that they would be taken before the emperor, the holy virgins prayed fervently to the Lord Jesus Christ, asking that He give them the strength not to fear torture and death. When the holy virgins and their mother came before the emperor, everyone present was amazed at their composure. They looked as though they had been brought to some happy festival, rather than to torture. Summoning each of the sisters in turn, Hadrian urged them to offer sacrifice to the goddess Artemis. The young girls remained unyielding.

Then the emperor ordered them to be tortured. They burned the holy virgins over an iron grating, then threw them into a red-hot oven, and finally into a cauldron with boiling tar, but the Lord preserved them.

The youngest child, Love, was tied to a wheel and they beat her with rods until her body was covered all over with bloody welts. After undergoing unspeakable torments, the holy virgins glorified their Heavenly Bridegroom and remained steadfast in the Faith.

They subjected St Sophia to another grievous torture: the mother was forced to watch the suffering of her daughters. She displayed adamant courage, and urged her daughters to endure their torments for the sake of the Heavenly Bridegroom. All three maidens were beheaded, and joyfully bent their necks beneath the sword.

In order to intensify St Sophia's inner suffering, the emperor permitted her to take the bodies of her daughters. She placed their remains in coffins and loaded them on a wagon. She drove beyond the city limits and reverently buried them on a high hill. St Sophia sat there by the graves of her daughters for three days, and finally she gave up her soul to the Lord. Even though she did not suffer for Christ in the flesh, she was not deprived of a martyr's crown. Instead, she suffered in her heart. Believers buried her body there beside her daughters.

The relics of the holy martyrs have rested at El'zasa, in the church of Esho since the year 777.

The Church celebrates and rejoices
In the feast of the three daughters: Faith, Hope, and Love
And their Mother Sophia, named for her wisdom:
For in them she gave birth to the three godly virtues.
Now they eternally behold their bridegroom, God the Word.
Let us rejoice spiritually in their memory and cry:
O our three Heavenly Protectors,
Establish, confirm and strengthen us
In Faith, Hope and Love.

You blossomed in the courts of the Lord
as a fruitful olive tree,
holy martyr Sophia;
in your contest you offered to Christ the sweet fruit of your womb,
your daughters Faith, Hope, and Love.
Together with them intercede for us all.

The holy branches of noble Sophia,
Faith, Hope, and Love,
confounded Greek sophistry through Grace.
They struggled and won the victory
and have been granted an incorruptible crown by Christ the Master of all.