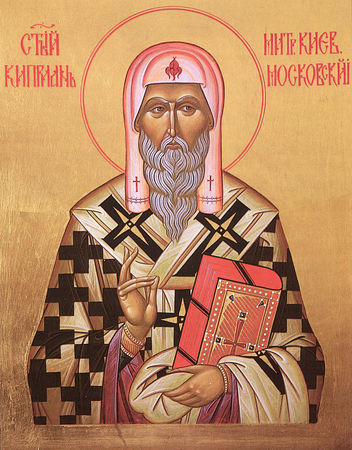 At the Constantinople Council it was decided to avoid a fragmentation of the Russian metropolia, and that "upon the death of St Alexis (February 12), he should become the Metropolitan of All Rus." At Moscow, St Cyprian endured many sorrows from the Great Prince, so at first he lived either in Lithuania or at Constantinople. Only in the year 1390, in the time of Great Prince Basil Dimitrievich, was he accepted as primate at Moscow.

St Cyprian concerned himself with the correction of the service books. There are preserved autographic manuscripts of certain Slavonic translations by the saint, witnessing to his great scientific work. And by his pastoral epistles he encouraged the faith of the Church. His activity in the translation of liturgical literature is widely known.