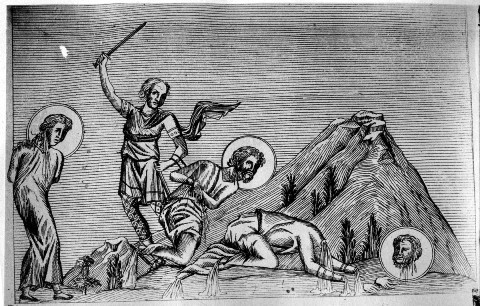 The Holy Martyrs Maximus, Asklepiodote, and Theodotus suffered at the beginning of the fourth century under the emperor Maximian Galerius (305-311). Eminent citizens of the city of Marcianopolis, Maximus and Asklepiodote led a devout Christian life. By their example they brought many to faith in Christ and to holy Baptism.

During the persecution Tiris, the governor of Thrace, went around the city subject to him and persecuted those believing in Christ. He summoned Maximus and Asklepiodote before him and demanded they abandon the Christian Faith. When the martyrs refused, he ordered that they be beaten.

Then a certain pious man named Theodotus, began to reproach the governor for his inhumanity and cruelty. They seized him also, and hanging him on a tree, they tortured him with iron hooks. After this, they threw the three martyrs into prison. Tiris traveled for two weeks more and took the holy martyrs along with him.

In the city of Adrianopolis he put them to still greater tortures, commanding that their bodies be scorched with white-hot plates. In the midst of their suffering they heard a Voice from Heaven encouraging them to persevere. After several days of torture they threw the martyrs to be eaten by wild beasts in the circus, but instead the she-bear released upon Sts Maximus and Theodotus began to cuddle up to them.

St Asklepiodote was tied to a bull, but she seemed to be rooted to the spot, and did not budge. Tiris resumed the journey and stopped in the village of Saltis before reaching the city of Philippopolis. Again he urged the martyrs to renounce Christ. When they refused, he ordered them to be beheaded. God's wrath overtook him when a bolt of lightning struck him as he sat upon the judgment seat.