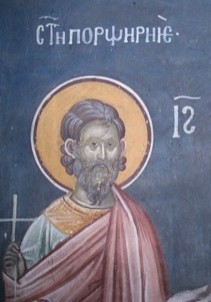 The Holy Martyr Porphyrius suffered during the reign of Julian the Apostate (361-363). Porphyrius was an actor and on the emperor's birthday he was performing a role at the theater, where he was supposed to mock the mystery of holy Baptism.

During the play Porphyrius was immersed in water and said: "The servant of God, Porphyrius, is baptized in the Name of the Father, and of the Son, and of the Holy Spirit." Through divine grace, he emerged from the water and confessed himself a Christian. Julian ordered him to be tortured, and after the torments, to be beheaded. This took place in the city of Ephesus in the year 361.