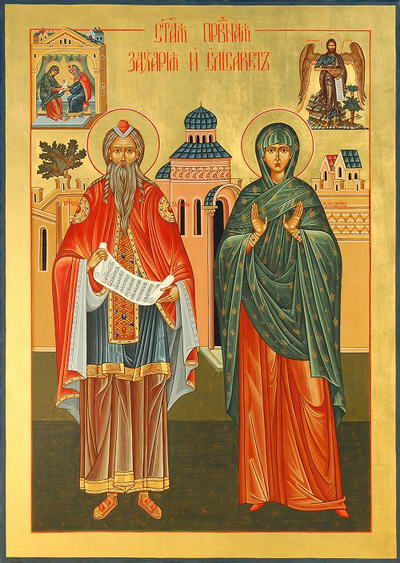 The Holy Prophet Zachariah and the Righteous Elizabeth were the parents of the holy Prophet, Forerunner and Baptist of the Lord, John. They were descended from the lineage of Aaron: St Zachariah, son of Barach, was a priest in the Jerusalem Temple, and St Elizabeth was the sister of St Anna, the mother of the Most Holy Theotokos. The righteous spouses, "walking in all the commandments of the Lord (Luke 1:6), suffered barrenness, which in those times was considered a punishment from God.

Once, during his turn of priestly service in the Temple, St Zachariah was told by an angel that his aged wife would bear him a son, who "will be great in the sight of the Lord" (Luke 1:15) and "will go before Him in the spirit and power of Elias" (Luke 1:17).

Zachariah doubted that this prediction would come true, and for his weakness of faith he was punished by becoming mute. When Elizabeth gave birth to a son, through the inspiration of the Holy Spirit she announced that his name was John, although no one in their family had this name.

They asked Zachariah and he also wrote the name John down on a tablet. Immediately the gift of speech returned to him, and inspired by the Holy Spirit, he began to prophesy about his son as the Forerunner of the Lord.

When King Herod heard from the Magi about the birth of the Messiah, he decided to kill all the infants up to two years old at Bethlehem and the surrounding area, hoping that the new-born Messiah would be among them.

Herod knew about John's unusual birth and he wanted to kill him, fearing that he was the foretold King of the Jews. But Elizabeth hid herself and the infant in the hills. The murderers searched everywhere for John. Elizabeth, when she saw her pursuers, began to implore God for their safety, and immediately the hill opened up and concealed her and the infant from their pursuers.

In these tragic days St Zachariah was taking his turn at the services in the Temple. Soldiers sent by Herod tried in vain to learn from him the whereabouts of his son. Then, by command of Herod, they murdered this holy prophet, having stabbed him between the temple and the altar (MT 23: 35). Elizabeth died forty days after her husband, and St John, preserved by the Lord, dwelt in the wilderness until the day of his appearance to the nation of Israel.

On the Greek calendar, Sts Zachariah and Elizabeth are also commemorated on June 24, the Feast of the Nativity of St John the Baptist.

The memory of Your prophets Zachariah and Elizabeth
We celebrate today, O Lord.
By their prayers, we beseech You,
O Christ God, save our souls!

Robed in the vestments of the priesthood,
according to the Law of God you offered whole-burnt offerings in a sacred manner, wise Zachariah.
You became a luminary and a seer of the mysteries,
bearing within yourself the signs of grace, all-wise one.
Slain by the sword in the temple of God, O prophet of Christ,
intercede together with the Forerunner
that our souls may be saved.

Today the prophet Zachariah, priest of the Most High and parent of the Forerunner,
has prepared a banquet to his memory to nourish the faithful,
mixing the drink of righteousness.
Therefore we praise him as a divine initiate of the grace of God. 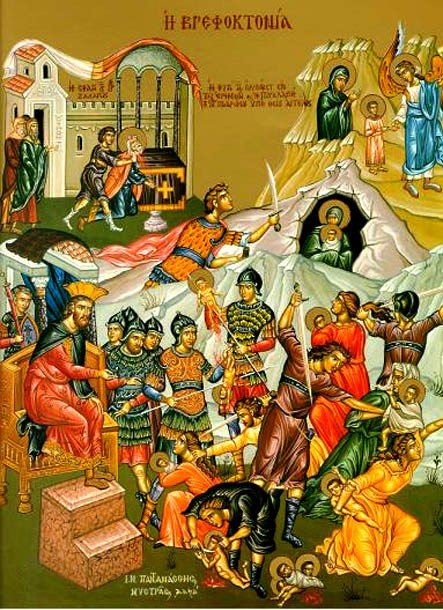