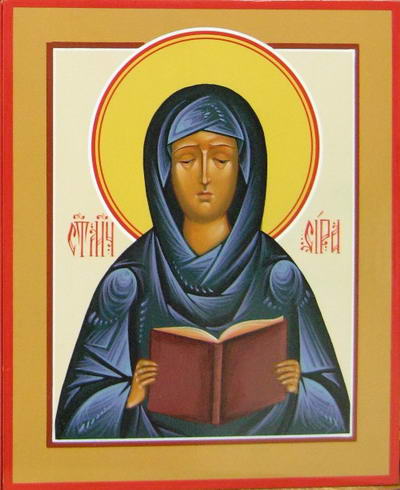 The martyr Syra lived during the sixth century in Persia and was the daughter of an illustrious pagan priest of the fire-worshippers (i.e. Zoroastrians) from Karkh-Seleucia in Elimiade (Abizarde). Syra's father, fearing the influence of Christianity on his daughter, sent her to the city of Tharsis after the death of her mother to be educated as a pagan priestess.

Syra became a priestess at the heathen temple of fire, and occupied herself with honorable activity. But once, after speaking with some Christian beggars, Syra believed in Christ the Savior and began to live as a Christian. She began to learn prayers and Psalms, to fast and to read Christian books.

Syra once fell ill. She was not able to find a remedy for her sickness, so she went to the Christian church and asked the priest only to give her some of the ashes from the church, hoping to receive healing from them. The priest, knowing Syra to be a servitor of idols, refused her request.

Syra's family began to suspect that she wanted to accept Christianity, and they asked Syra's stepmother to persuade her to abandon this intention. The stepmother, pretending that she herself was a secret Christian, talked sweetly with Syra, telling her to keep her faith secret. She also told Syra to continue to serve the fire outwardly, so she would not fall away from Christ altogether by being subjected to torture.

Syra began to hesitate about accepting Baptism, but when she saw a vision in her sleep about the desolate fate which befell her mother after her death, and about the luminous abodes foreordained for Christians, she made up her mind and went to the bishop, asking him to baptize her. The bishop declined to fulfill her request, fearing to give the pagan priests a reason for persecuting Christians. Besides this, he thought that Syra, fearing her father's wrath, would deny Christ. The bishop advised her first to openly confess her faith in the Savior before her kinsfolk.

Once during the morning sacrifice, St Syra was stoking the priestly fire worshipped by the Persians as their god, and overturning the sacrifice she proclaimed loudly: "I am a Christian and reject false gods and I believe in the True God!"

The father beat his daughter until he became exhausted, and then threw her in prison. With tears and entreaties he urged her to return to her former faith, but Syra was unyielding. The father then denounced her to the pagan high priest, and afterwards to the governor and to the emperor Chozroes the Elder.

They tortured the holy maiden for a long time in prison, but the Lord strengthened her, and she stood firmly on her faith in Christ. After she bribed the prison guard, St Syra went to the bishop and received Baptism. The Lord granted St Syra the gift of wonderworking. When the Persians gave the martyr over for the leering of impious men, they began to jeer at the saint, saying: "What's the fable told about you, that the chains fall from your neck, hands and legs by themselves? Let us see now how the chains fall off!" St Syra prayed in the depths of her heart to the Savior, and immediately the chains fell from her. And this was not the only time.

Succumbing to her tortures, St Syra fell deathly ill. She began to entreat the Lord that He not permit her to die from the illness, but rather to grant her a martyr's crown. The Lord heard her and granted healing. Seeing the martyr healed, the prison guard and jail warden went to dishonor the holy maiden, but the Lord struck one with illness and the other one was struck dead. The martyr was condemned to be stranged.

They conducted the execution with refined cruelty. After a while they left go of the rope, asking the saint whether she wanted to change her mind and remain among the living. But the martyr, barely alive, refused and requested the execution be done quickly. The body of the saint was thrown to dogs to be devoured, but they would not touch it. Christians then buried the body of St Syra.