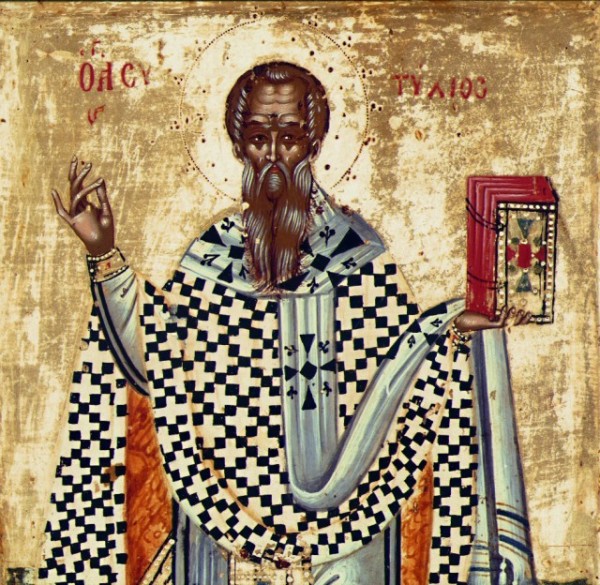 Saint Menas, Patriarch of Constantinople (536-552), was at first a presbyter at Constantinople and supervisor there of the Home of St Sampson the Hospitable for the poor and needy during the reign of St Justinian I (527-565). After the removal of the heretic Anthimus (535-536), the holy presbyter Menas was raised to the patriarchal throne of Constantinople as one worthy to be bishop, because of his profound virtue and firm confession of Orthodoxy.

Agapitus, the Bishop of Rome (535-536), participated in the consecration of St Menas. He had come to Constantinople in order to depose the heretic Anthimus. During the patriarchate of St Menas a miracle occurred at Constantinople, which was known to the whole city.

A certain Jewish child went with other children to church and he partook of the Holy Mysteries of Christ. At home, he told his father about this. In a terrible rage, he seized the child and threw him into a red-hot oven (the father was a glass-blower). He said nothing to his wife. For three days, the mother tearfully searched for her son, calling loudly for him. On the third day, he emerged from the red-hot oven. When she pulled the child out, she found that he was unharmed.

The boy said that a most radiant Lady had come to him, cooling the fire and bringing him water and food. This incident became known to St Menas and the emperor Justinian I. The boy and his mother received Baptism, but the father of the child was obdurate and did not wish to repent, in spite of the great miracle that he had seen. Then the emperor ordered that the father be tried as a child-killer, and sentenced him to death.

The holy Patriarch Menas ruled the Church of Constantinople for sixteen years. During his patriarchate at Constantinople, the famous church of Hagia Sophia, the Wisdom of God, was consecrated. The saint died peacefully in the year 552.