Our Holy Father Arsenius of Komel 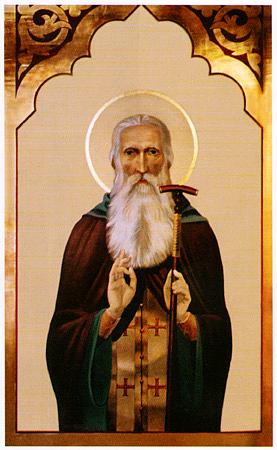 Saint Arsenius of Komel was born in Moscow, and was descended from a noble family, the Sakharusov. In his youth he was tonsured at the Trinity-Sergiev monastery, and he occupied himself there with the copying of books. There is a Gospel that he copied in the year 1506. In the years 1525-1527 the monk was igumen at the Trinity-Sergiev monastery. He often withdrew to the solitary Makrisch monastery. Great Prince Basil IV (1505-1533), making a visit to the monastery at that time, was surprised to behold the igumen of a prosperous monastery in old clothes covered with patches. The brethren explained that St Arsenius wished to travel in the wilderness.

Setting out together with his own cell elder to the Komel forest located 50 versts from Vologda, St Arsenius made a large wooden cross, and with this cross on his shoulders he set out through the forest to pick out a spot for a future monastery. Coming to a marshy place through a swamp, the monk stumbled under the heavy cross and fell. A heavenly beam of light flashed upon the ascetic at this very moment and convinced him to establish his monastery on this site. He set up the cross and built the first cell.

The local inhabitants, went there to hunt wild animals, and killed the disciple of St Arsenius. He himself was forced to withdraw into the Shelegod forest. Several monks soon gathered at his new monastery, and afterwards fugitives from a Tatar incursion upon the surrounding populace settled there. St Arsenius, seeking after silence, desired to live in a quieter spot.

In the year 1530 Great Prince Basil gave him a deed for land in the Komel forest at the Kokhtisha River. The monk began here to clear the forest together with his disciple Gerasimus. By prayer, the saint tamed the wild beasts. When several monks had gathered about him, he built a church in honor of the Placing of the Veil of the Most Holy Theotokos.

Visiting the Shelegod monastery, the monk instructed the peasants who had settled in the area of the monastery. He bid them reverently to observe feastdays and Sundays. Once when a peasant who had heard him started to work on a feastday, a wind suddenly arose scattering all his sheaves.

Having spent his life in fasting, prayer and constant work, St Arsenius died on August 24. 1550. His Life was written soon after his death, but burned in a fire in the Komel monastery in 1596. In shortened form, it was restored from the surviving manuscripts and augmented with posthumous miracles by John, a monk of the monastery.

A hundred years later after the death of the saint, the igumen Joasaph built a stone church at the monastery in honor of the Placing of the Veil of the Most Holy Theotokos. Two chapels of this church show the spiritual bond of teacher and disciple. The left chapel was dedicated to St Sergius of Radonezh, and the right to St Arsenius of Komel.