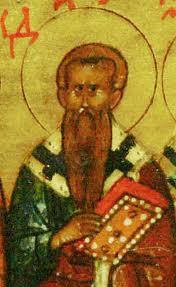 The Hieromartyr Eutyches, a disciple of the holy Apostles John the Theologian and Paul, lived from the first century into the beginning of the second century, and was from the Palestinian city of Sebastea.

Although St Eutyches is not one of the 70 Apostles, he is called an Apostle because of his labors with the older Apostles, by whom he was made bishop. After hearing about Christ the Savior, St Eutyches first became a disciple of the Apostle John the Theologian. Later he met the Apostle Paul, and preached together with him on the early journeys.

St Eutyches underwent many sufferings: they starved him with hunger, beat him with iron rods, they threw him into the fire, and then to be devoured by wild beasts. Once, a lion was let loose upon the saint, which astonished everyone because it praised the Creator with a human voice. The hieromartyr Eutyches completed his labors in his native city, where he was beheaded with a sword at the beginning of the second century.

By sharing in the ways of the Apostles,
you became a successor to their throne.
Through the practice of virtue,
you found the way to divine contemplation, O inspired one of God;
by teaching the word of truth without error,
you defended the Faith, even to the shedding of your blood.
Hieromartyr Eutychius, entreat Christ God to save our souls.

A successor of the Apostles and an excellent example to bishops,
Eutychius, you were glorified as a martyr.
You shone forth like the sun enlightening all,
dispelling the dark night of godlessness.
Therefore, we honor you as truly a godly celebrant of the Mysteries of Christ.