The Consecration of the Church of the Resurrection of Christ 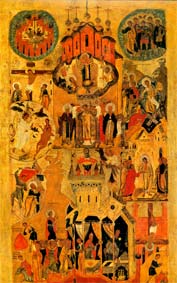 
After the voluntary Passion and Death on the Cross of our Lord and Savior Jesus Christ, the holy place of His suffering was long trampled on by pagans. When the Roman emperor Titus conquered Jerusalem in the year 70, he razed the city and destroyed the Temple of Solomon on Mount Moriah, leaving there not a stone upon a stone, as even the Savior foretold (Mt.13:1-2).


Later on the zealous pagan emperor Hadrian (117-138) built on the site of the Jerusalem destroyed by Titus a new city named Aelia Capitolina for him (Hadrian Aelius). It was forbidden to call the city by its former name.


He gave orders to cover the Holy Tomb of the Lord with earth and stones, and on that spot to set up an idol. On Golgotha, where the Savior was crucified, he constructed a pagan temple dedicated to the goddess Venus in 119. Before the statues they offered sacrifice to demons and performed pagan rites, accompanied by wanton acts.


In Bethlehem, at the place the Savior was born of the All-Pure Virgin, the impious emperor set up an idol of Adonis. He did all this intentionally, so that people would forget completely about Christ the Savior and that they would no loner remember the places where He lived, taught, suffered and arose in glory.


At the beinning of the reign of St Constantine the Great (306-337), the first of the Roman emperors to recognize the Christian religion, he and his pious mother the empress Helen decided to rebuild the city of Jerusalem. They also planned to build a church on the site of the Lord's suffering and Resurrection, in order to reconsecrate and purify the places connected with memory of the Savior from the taint of foul pagan cults.


The empress Helen journeyed to Jerusalem with a large quantity of gold, and St Constantine the Great wrote a letter to Patriarch Macarius I (313-323), requesting him to assist her in every possible way with her task of the renewing the Christian holy places.


After her arrival in Jerusalem, the holy empress Helen destroyed all the pagan temples and reconsecrated the places desecrated by the pagans. She was zealous to find the Cross of our Lord Jesus Christ, and she ordered the excavation of the place where the temple of Venus stood. There they discovered the Sepulchre of the Lord and Golgotha, and they also found three crosses and some nails.


In order to determine upon which of the three crosses the Savior was crucified, Patriarch Macarius gave orders to place a dead person, who was being carried to a place of burial, upon each cross in turn. When the dead person was placed on the Cross of Christ, he immediately came alive. With the greatest of joy the empress Helen and Patriarch Macarius raised up the Life-Creating Cross and displayed it to all the people standing about.


The holy empress quickly began the construction of a large church which enclosed within its walls Golgotha, the place of the Crucifixion of the Savior, and the Sepulchre of the Lord, located near each other. The holy Apostle and Evangelist John wrote about this: "Now in the place where He was crucified, there was a garden, and in the garden a new tomb, in which no one had yet been laid. Therefore they laid Jesus there because of the Jewish preparation day, for the tomb was nearby" (John 19:41-42). The Church of the Resurrection was ten years in building, and the holy empress Helen did not survive to see its completion. She returned to Constantinople, and reposed in the year 327. After her arrival in Jerusalem, the holy empress built churches in Bethlehem, on the Mount of Olives, at Gethsemane and in many other places connected with the life of the Savior and events in the New Testament.


The construction of the church of the Resurrection, called "Martyrion" in memory of the sufferings of the Savior, was completed in the same year as the Council of Tyre, and in the thirtieth year of the reign of St Constantine the Great. Therefore, at the assembly of September 13, 335, the consecration of the temple was particularly solemn. Hierarchs of Christian Churches in many lands: Bythnia, Thrace, Cilicia, Cappadocia, Syria, Mesopotamia, Phoenicia, Arabia, Palestine, and Egypt, participated in the consecration of the church. The bishops who participated in the Council of Tyre, and many others, went to the consecration in Jerusalem. On this day all the city of Jerusalem was consecrated. The Fathers of the Church established September 13 as the commemoration of this remarkable event.

You have revealed the beauty of the holy dwelling place of Your glory on earth
to be like the splendor of the heavenly firmament, O Lord.
Through the prayers of the Theotokos,
strengthen it for ever and ever
and accept our supplication
which we ceaselessly offer to You therein,
the life and resurrection of all.

Podoben: "Today You have shown forth..."
The Church has been revealed to be a heaven filled with light
which enlightens all the faithful.
Standing within it we cry: "Establish this house, O Lord." 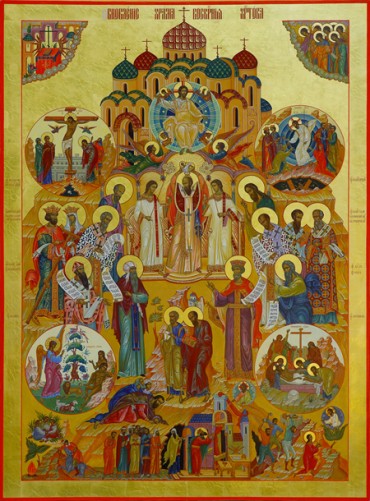