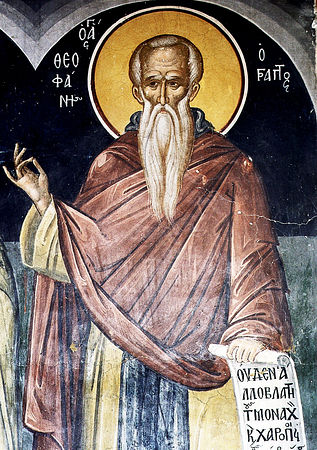 Saint Theophanes, Confessor and Faster, was born into a family of pagans. In his youth Theophanes came to believe in Christ, was baptized and secretly left his pagan parents to go to Mount Dabis to an Elder, who had lived there in asceticism for seventy-five years.

The ascetic taught the young man to read the Scriptures, and instructed him in the rules of monastic life. Five years later the Elder died, and St Theophanes spent the next 58 years in his cave in solitude. Then he came down from the mountain and began to preach Christ among the pagans, and he converted many to Christianity.

By order of the Roman emperors Carlus (282-283) and his sons Numerian and Carlinus (283-284), St Theophanes was seized and subjected to torture. The holy confessor bravely endured his sufferings and was released alive. Having returned to the mountain, St Theophanes lived there for another seventeen years and died in peace.