St Nicetas the Man of God 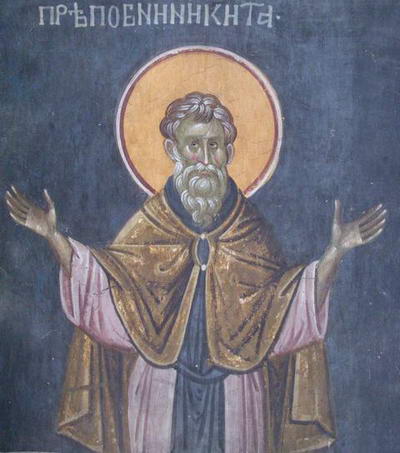 Saint Nicetas the Hidden lived at Constantinople and occupied the position of "chartolarium" ("letter-writer"). They call him "the Hidden," because living in the world amid the bustle of the city, with secret exploits of faith, he attained spiritual perfection and was a great saint of God. His saintly life was revealed through unusual circumstances.

Two friends, a certain priest and the deacon Sozon, had quarreled. The priest died, and the deacon grieved that they had not been able to be reconciled. He told an experienced Elder of the sin that tormented his conscience. He gave Sozon a letter and ordered him to give it to the first person whom he would meet at midnight at the temple of Hagia Sophia, the Wisdom of God.

St Nicetas the Chartolarian appeared before him. Having read the letter, he began weeping and said, that it made him responsible for this, and that it was beyond his strength, but with the prayers of the Elder who had sent Sozon, he would strive to accomplish this. Making a prostration before the church doors, St Nicetas said: "Lord, open to us the doors of Thy mercy,"and the doors of the temple flew open by themselves. Leaving the deacon at the threshold, St Nicetas began to pray, and Sozon saw that he shone with a strange light.

Afterwards they went from the church, and the doors again closed. Approaching the church of the Blachernae Mother of God, St Nicetas again began praying and again the doors opened in front of them. In the church there shone a light, and from the altar came two rows of priests, among whom Deacon Sozon recognized his dead friend. St Nicetas quietly said: "Father, speak to your brother, and cease the enmity between you."

Immediately the priest and Deacon Sozon greeted each other. They embraced one another with love and were reconciled. The priest went back, and the doors closed by themselves. St Nicetas said to the deacon: "Brother Sozon, save your soul both for your sake, and for my benefit. To the Father who sent you, say that the purity of his holy prayers and his trust in God made possible the return of the dead."

After these words St Nicetas became invisible to Sozon. Having returned to his spiritual Father and Elder, the deacon thanked him with tears, that through his prayers, the great hidden saint of God Nicetas the Chartolarian had removed the sin from both the living and the dead. 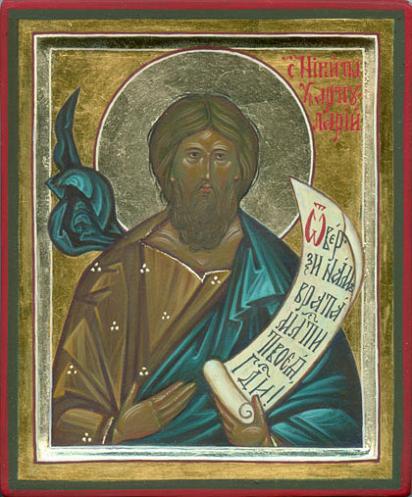