Commemoration of the Third Ecumenical Council 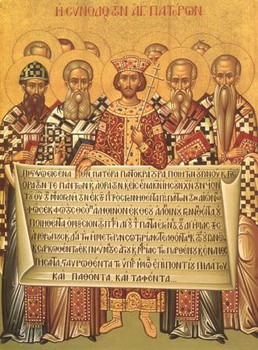 The Third Ecumenical Council was convened in the year 431 in the city of Ephesus (Asia Minor) during the reign of the emperor Theodosius the Younger (408-450). The Council was convened to investigate without further delay, the false teachings of Patriarch Nestorius of Constantinople (428-431).

Contrary to the dogmas of the Ecumenical Church, Nestorius dared to assert that the Son of God Jesus Christ is not one Person (Hypostasis), as Holy Church teaches, but is rather two distinct persons, one Divine, and the other human.

Regarding the Most Holy Theotokos, he impiously asserted that She should not be called the Mother of God, but rather only the mother of the man Christ. The heresy of Nestorius is opposed to one of the basic dogmas of the Christian Faith: our Lord Jesus Christ's divine and human natures.

According to the false teaching of Nestorius, Jesus Christ was born as an ordinary man, and afterwards because of His sanctity of life, He was somehow joined to the Godhead. With this blasphemous teaching of Nestorius the Enemy of the race of man, the devil, attempted to undermine the Christian Faith on these points: that the Pre-eternal God the Word, the Son of God, actually was incarnate in the flesh of the All-Pure Theotokos. Having become Man, He thereby redeemed the human race from slavery to sin and death by His own suffering and death, and by His glorious Resurrection He trampled down Hades and death and opened the path to the Kingdom of Heaven to those who believered in Him, and to those striving to live according to His commandments.

A long while before the convening of the Ecumenical Council, St Cyril, Archbishop of Alexandria, repeatedly tried to reason with the heretic Nestorius. St Cyril in his letters explained the mistakes of judgment by Nestorius, but Nestorius stubbornly continued with his teachings.

St Cyril wrote about the danger of the rising heresy to Celestine, the Pope of Rome, and to other Orthodox bishops, who also attempted to reason with Nestorius. When it became clear that Nestorius would continue with his teachings and that they were becoming widespread, the Orthodox bishops appealed to the emperor Theodosius the Younger for permission to convene an Ecumenical Council. The Council was convened on the day of the Most Holy Trinity, June 7, 431.

Two hundred bishops attended the Council. Nestorius also arrived in Ephesus, but he did not appear at the Council even though the Fathers suggested three times that he attend the sessions. Then the Fathers began to discuss the heresy in the absence of the heretic.

The sessions of the Council continued from June 22 to August 31. At the Council of Ephesus were present such famous Fathers of the Church as St Cyril of Alexandria, Juvenal of Jerusalem, Memnon of Ephesus (St Celestine, Pope of Rome, was unable to attend because of illness, but he sent papal legates).

The Third Ecumenical Council condemned the heresy of Nestorius and confirmed the Orthodox teaching on these matters: that it is necessary to confess the Lord Jesus Christ as One Person (Hypostasis) in two natures, the Divine and the Human, and that the All-Pure Mother of the Lord be acclaimed as Ever-Virgin and truly the Theotokos. In the guidance of the Church the holy Fathers issued eight Canons, and the "Twelve Anathemas against Nestorius" by St Cyril of Alexandria.