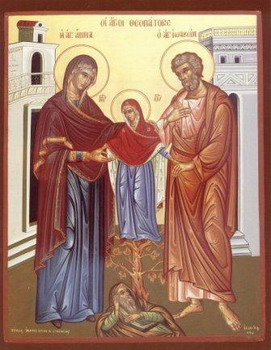 Saint Joachim, the son of Barpathir, was of the tribe of Judah, and was a descendant of King David, to whom God had revealed that the Savior of the world would be born from his seed. Saint Anna was the daughter of Matthan the priest, who was of the tribe of Levi. St Anna's family came from Bethlehem.


The couple lived at Nazareth in Galilee. They were childless into their old age and all their life they grieved over this. They had to endure derision and scorn, since at that time childlessness was considered a disgrace. They never grumbled, but fervently prayed to God, humbly trusting in Him.

Once, during a great feast, the gifts which Joachim took to Jerusalem as an offering to God were not accepted by the priest Reuben, who considered that a childless man was not worthy to offer sacrifice to God. This pained the old man very much, and he, regarding himself the most sinful of people, decided not to return home, but to settle in solitude in a desolate place.

When St Anna learned what humiliation her husband had endured, she sorrowfully entreated God with prayer and fasting to grant her a child. In his desolate solitude the righteous Joachim also asked God for this. The prayer of the saintly couple was heard. An angel told them that a daughter would be born to them, Who would be blessed above all other women. He also told them that She would remain a virgin, would be dedicated to the Lord and live in the Temple, and would give birth to the Savior. Obeying the instructions of the heavenly messenger, Sts Joachim and Anna met at the Golden Gate in Jerusalem. Then, as God promised, a daughter was born to them and they named her Mary.

St Joachim died a few years later at the age of 80, after his daughter went to live in the Temple. St Anna died at the age of 79, two years after her husband.

Sts Joachim and Anna are often invoked by couples trying to have children.

Since you were righteous under the law of grace, O Joachim and Anna,
you gave birth to the God-given infant for our sake.
Therefore, the divine Church radiantly keeps feast today,
joyfully celebrating your honorable memory and giving glory to God
who has raised up a horn of salvation from the house of David.

Podoben: “Seeking the highest...”
Anna is now no longer barren
and nurses the All-Pure One!
She rejoices and calls us all to sing a hymn of praise to Christ,
who from her womb gave mankind the only ever Virgin Mother.

Since you were righteous under the law of grace, O Joachim and Anna,
For our sake you gave birth to the God-given Infant.
The divine Church today therefore feasts radiantly,
Joyfully celebrating your honorable memory and giving glory to God
Who has raised up a horn of salvation
From the house of David!

Now Anna is no longer barren and nurses the All-Pure One!
She rejoices and calls us to sing a hymn of praise to Christ
Who gave mankind the only Ever-Virgin Mother! 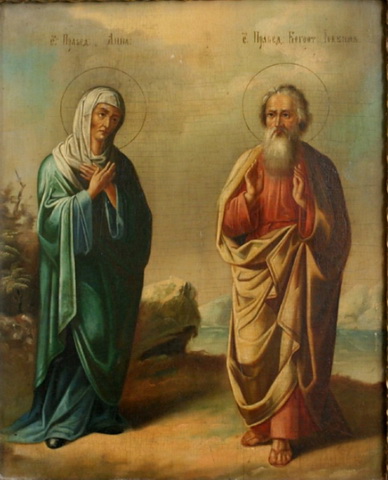 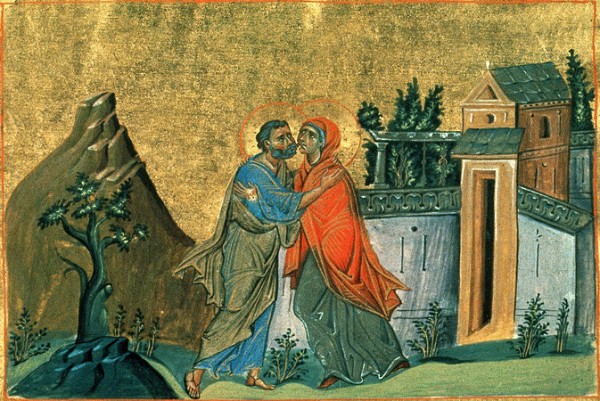