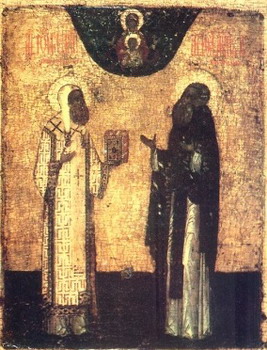 Saint John, Archbishop of Novgorod, was born at Novgorod of the pious parents Nicholas and Christina. He passed his childhood in quiet and peaceful surroundings.

After the death of their parents, John and his brother Gabriel decided to establish a small monastery in honor of the Annunciation of the Most Holy Theotokos with their inheritance.

At first they built a wooden church, but a short time later they also built a stone church. Their good intentions were not without difficulties. Before they finished construction on the stone temple, the brothers totally exhausted their means. Only their steadfast and living faith inspired them to continue what they had started. They turned for help with it to the Queen of Heaven, on Whose account this God-pleasing matter was begun.

Because of their unflagging faith and zeal, She manifested Her mercy to them. She told them in a dream that everything necessary for the completion of the temple would be provided. On the following morning, the brothers saw a splendid horse loaded with two sacks of gold. No one came for it, and when the brothers removed the sacks, the horse vanished. Thus did the Mother of God provide for the monastery.

The chronicles speak of St John being made bishop under the entries for the year 1162. His first archpastoral letter was addressed to the clergy of his diocese. It was filled with an endearing concern about his flock, written in a spirit of fatherly guidance: "It has pleased God and the Most Holy Theotokos, through your prayers, that I, a mere man, should not refuse this high office, of which I am unworthy. Since you yourselves have encouraged me to this service, now listen to me ..."

The saint spoke about the vocation of the pastor. He is concerned about his sheep, he not only chastizes, but also heals those who lead a sinful life. "At the beginning of my discourse I ask you not to be too much attached to this world, but rather be instructive to people. Look first of all, that they not give themselves over to drunkenness. You yourselves know, that through this vice most of all, not only do the simple people perish, but we also. When your spiritual children come to you in repentance, then question them with mildness. It is not seemly to impose harsh penances.Do not scorn the reading of books, since if we do not start doing this, then what will distinguish us from the simple unschooled people? ... Do not impose penances upon orphans.... Let everything be seemly, for the yoke of Christ ought to be light."

In the year 1165 St John was elevated to archbishop (from that time the Novgorod cathedra became an archbishopric).

The winter of 1170 was a very difficult time for Novgorod. Suzdal forces with their allies laid siege to the city for two days, since the Novgorod people would not accept Prince Svyatoslav. They also took the tribute-tax of the Dvina district which was not subject to them.

In the morning the saint told the people about the command and sent his deacon with clergy to the church of the Savior for the icon. Going into the church, the archdeacon bowed down before the icon and wanted to take it, but the icon would not budge. The archdeacon returned to the archbishop and told him what had happened.

Then the saint with all the assembly went to the Il'ina church and on their knees began to pray before the icon. They began to sing a Molieben, and after the Sixth Ode at the kontakion "Protectress of Christians," the icon itself moved from the place. The people with tears cried out: "Lord, have mercy!"

Then St John took the icon and together with two deacons carried it to the city walls. The Novgorodian people saw their doom, for the Suzdal forces and their allies were ready for pillage. In the sixth hour the assault began, and the arrows fell like rain. Then the icon turned its visage towards the city, and tears trickled down from the eyes of the Most Holy Theotokos, which the saint gathered on his phelonion.

A darkness covered the Suzdal forces, they became unable to see and they fell back in terror. This occurred on February 25, 1170. St John established a solemn feastday for Novgorod, the Sign of the Most Holy Theotokos (November 27).

The Suzdal army inflicted great harm on the Novgorod region. Here also the archpastor did not remain on the sidelines. He showed fatherly concern for devastated households suffering hunger, and he distributed aid to orphans. Just like other Russian hierarchs, he calmed and soothed the internecine strife in much-suffering Rus by his prayers and his virtue. In 1172, the archpastor journeyed to Vladimir to reconcile Prince Andrew Bogoliubsky with the Novgorod people.

The saint not only shared in the adversity of his people, but most of all he concerned himself with their spiritual enlightenment. St John devoted much attention to spiritual conversations, which often occurred in the circle of the clergy and the laypeople. There are preserved about 30 of his instructions concerning Baptism, Confession, the Holy Eucharist.

His Guidance for Monks is filled with spiritual grandeur: "Once having followed after Christ, monks as actualisers of spiritual life by the Cross ought to live in solitary places, separate from worldly folk. Let them steal nothing for themselves, and let them be wholly dedicated to God. A monk ought always to be a monk, at every time and at every place, both in asleep and awake he should preserve the memory of death, and be fleshless in the flesh."

"Not for everyone does the monastery serve as a therapy for sensual love, just as silence is for anger, and non-acquisitiveness is for money, and the tomb is for avarice. Monastic life and worldly life are incompatible, just as one would not harness a camel and horse together. The monk bends his neck beneath the yoke of the Creator and ought to pull the plow in the valley of humility, in order to multiply the fine wheat by the warmth of the Life-giving Spirit and to sow the seeds of the reason of God. The black-robed is not his own master; being like gods, take care not to rot in likeness to people, nor fall from the heights like Lucifer... for haughty pride comes from human glory."

The saint's spiritual powers of grace were unusual. For his simplicity of soul and purity of heart God gave him power against demons. Once, when the saint prayed by night, as was his custom, he heard something splashing the water in the washbasin. Seeing that there was no one beside him, the saint realized that this was a demon trying to scare him.

The saint made the Sign of the Cross over the washbasin and restrained the devil. Soon the evil spirit could no longer bear the prayer of the saint, which scorched it like fire, and it began to beg to be released from the washbasin. The saint was agreeable, but ordered the demon to carry him from Novgorod to Jerusalem to the Sepulchre of the Lord and back, all in one night. The demon fulfilled the saint's command, but asked him to tell no one about his shame.

In one of his conversations, the saint told his flock that he knew a man who visited the Holy Land in one night. The revenge of the evil spirit was not slow in coming. It began to scatter women's things in his cell. Once, when people had gathered in St John's cell, the devil transformed himself into a woman who ran in front of them as if fleeing from the cell.

The saint heard the racket and gently asked, "What has happened, my children, what is the noise all about?" The unruly crowd, shouting various charges of perverse life against the saint, dragged him to the River Volkhov. They put the saint on a raft and released it down along the current of the river. But the raft, contrary to expectation, sailed against the current straight to the St George men's monastery, three versts from Novgorod.

Seeing this, people were ashamed and with weeping and shouts they went along the riverbank after the raft, beseeching the saint to forgive them and to return to the city. The heart of the simple archpastor was filled with joy, not only for himself, but for his flock: "Lord, do not hold this sin against them!" he prayed, and granted pardon to all.

This happened not long before the death of the saint. Sensing its approach, he put off the hierarch's omophor and took the schema with the name John, the same name he had in his youth. He appointed his brother, St Gregory (May 24) as his successor. The saint died on September 7, 1186 and was buried in the church of Holy Wisdom.

In 1439, repairs were being made at the cathedral of Holy Wisdom (Hagia Sophia) through the zeal of St Euthymius; in the portico chapel of St John the Forerunner, a stone suddenly came loose and cracked the lid of the tomb standing there. St Euthymius gave orders to lift off the boards broken by the stone, and the temple was filled with fragrance.

In the tomb they beheld the incorrupt relics of the saint, but no one was able to identify who this archpastor was. In his cell, St Euthymius fervently began to pray for God to reveal to him the name of this saint.

That night a man appeared before him, clothed in the vestments of a hierarch, and said that he was Archbishop John, who was found worthy to serve the miracle of the Most Holy Theotokos in honor of Her Sign.

"I proclaim to you the will of God," continued the saint, "to celebrate the memory of the archbishops and princes lying here, on October 4, and I shall pray Christ for all Christians." His memory is also celebrated at the Synaxis of Novgorod hierarchs on February 10. In 1630, a feastday was also established for December 1.

Great Novgorod rejoices over your relics today, O holy Hierarch John,
For they shine as the sun and grant healing to all who honor them in faith.
Entreat Christ God to deliver his people from captivity,
O wise Wonderworker, heavenly man and earthly angel,
That together with them we may hymn and glorify the Triune God.