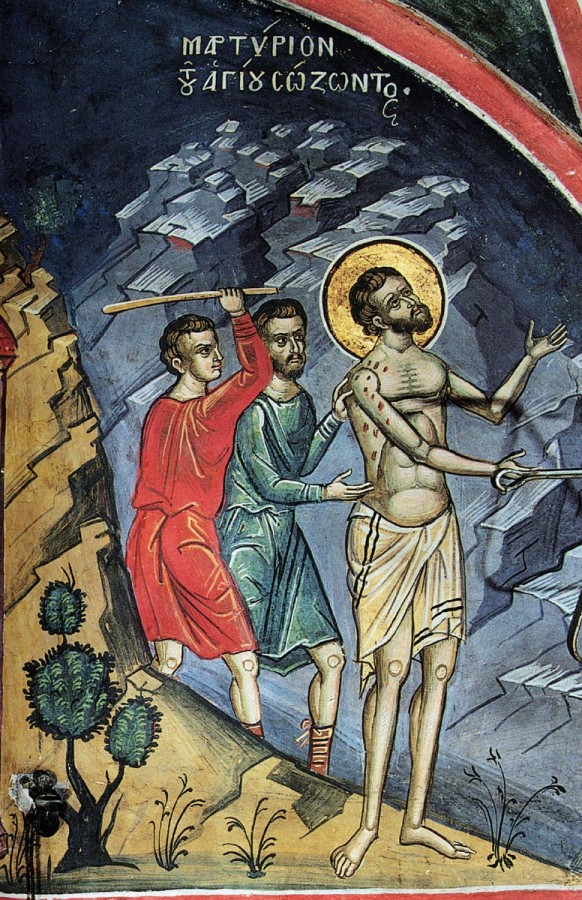 The Martyr Sozon, a native of Lykaonia, was a shepherd. He read the Holy Scriptures attentively, and he loved to share his knowledge about the One God with the shepherds who gathered together with him. He brought many to the faith in Christ and to Baptism.

One night, as he sat under an oak tree, he had a vision foretelling his martyrdom for Christ. He went to the city of Cilician Pompeiopolis, where a festal pagan celebration was being prepared for a golden idol, standing in a pagan temple.

Unseen by anyone, St Sozon went into the pagan temple and broke off the idol's hand, then he smashed it and gave the gold to the poor. The missing hand of the idol caused an uproar and commotion in the city. Many were under suspicion, and were subjected to interrogation and torture.

Not wanting to be the cause of suffering for other people, St Sozon went to the emperor Maximian (284-305) and declared that it was he who broke the hand of the idol.

"I did this," he said, "so that you might see the lack of power of your god, which offered me no resistance. It is not a god, but a deaf and dumb idol. I wanted to smash it all into pieces, so that people would no longer worship the work of men's hands."

The emperor in a fitful rage commanded that St Sozon be tortured mercilessly. They hung him up and struck him with iron claws, and then they put iron boots in which there were nails on his feet and took him through the city.

After this they again suspended him and beat him with iron rods until his bones broke. In these terrible torments St Sozon gave up his spirit to God. By decree of the emperor, slaves lit a fire to burn the body of the martyr, but suddenly lightning flashed, it thundered loudly, and rain poured down over the fire.

Christians took the body of the martyr by night and buried it. By his grave and at the place where he had the vision, many of the sick were healed. A church was built later in memory of the sufferings of the holy martyr.

Let us gather today and together sing to Sozon,
the true and divinely wise martyr,
an ex-pert fighter for the faith,
the mystical seer of divine grace,
a generous provider of healing,
who prays to Christ God for us all.