Our Holy Father Moses the Negro 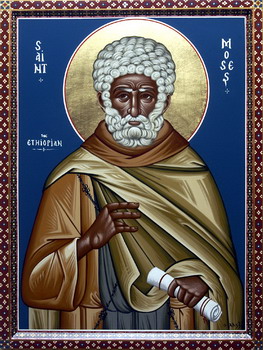 Saint Moses Murin the Black lived during the fourth century in Egypt. He was an Ethiopian, and he was black of skin and therefore called "Murin" (meaning "like an Ethiopian"). In his youth he was the slave of an important man, but after he committed a murder, his master banished him, and he joined a band of robbers.

Because of his bad character and great physical strength they chose him as their leader. Moses and his band of brigands did many evil deeds, both murders and robberies. People were afraid at the mere mention of his name.

Moses the brigand spent several years leading a sinful life, but through the great mercy of God he repented, left his band of robbers and went to one of the desert monasteries. Here he wept for a long time, begging to be admitted as one of the brethren. The monks were not convinced of the sincerity of his repentance, but the former robber would not be driven away nor silenced. He continued to ask that they accept him.

St Moses was completely obedient to the igumen and the brethren, and he poured forth many tears of sorrow for his sinful life. After a certain while St Moses withdrew to a solitary cell, where he spent the time in prayer and the strictest fasting in a very austere lifestyle.

Once, four of the robbers of his former band descended upon the cell of St Moses. He had lost none of his great physical strength, so he tied them all up. Throwing them over his shoulder, he brought them to the monastery, where he asked the Elders what to do with them. The Elders ordered that they be set free. The robbers, learning that they had chanced upon their former ringleader, and that he had dealt kindly with them, followed his example: they repented and became monks. Later, when the rest of the band of robbers heard about the repentance of St Moses, then they also gave up their thievery and became fervent monks.

St Moses was not quickly freed from the passions. He went often to the igumen, Abba Isidore, seeking advice on how to be delivered from the passions of profligacy. Being experienced in the spiritual struggle, the Elder taught him never to eat too much food, to remain partly hungry while observing the strictest moderation. But the passions did not cease to trouble St Moses in his dreams.

Then Abba Isidore taught him the all-night vigil. The monk stood the whole night at prayer, so he would not fall asleep. From his prolonged struggles St Moses fell into despondency, and when there arose thoughts about leaving his solitary cell, Abba Isidore instead strengthened the resolve of his disciple.

In a vision he showed him many demons in the west, prepared for battle, and in the east a still greater quantity of holy angels, also ready for fighting. Abba Isidore explained to St Moses that the power of the angels would prevail over the power of the demons, and in the long struggle with the passions it was necessary for him to become completely cleansed of his former sins.

St Moses undertook a new effort. Making the rounds by night of the wilderness cells, he carried water from the well to each brother. He did this especially for the Elders, who lived far from the well and who were not easily able to carry their own water. Once, kneeling over the well, St Moses felt a powerful blow upon his back and he fell down at the well like one dead, laying there in that position until dawn. Thus did the devils take revenge upon the monk for his victory over them. In the morning the brethren carried him to his cell, and he lay there a whole year crippled. Having recovered, the monk with firm resolve confessed to the igumen, that he would continue to live in asceticism. But the Lord Himself put limits to this struggle of many years: Abba Isidore blessed his disciple and said to him that the passions had already gone from him. The Elder commanded him to receive the Holy Mysteries, and to go to his own cell in peace. From that time, St Moses received from the Lord power over demons.

Accounts about his exploits spread among the monks and even beyond the bounds of the wilderness. The governor of the land wanted to see the saint. When he heard of this, St Moses decided to hide from any visitors, and he departed his own cell. Along the way he met servants of the governor, who asked him how to get to the cell of the desert-dweller Moses. The monk answered them: "Go no farther to see this false and unworthy monk." The servants returned to the monastery where the governor was waiting, and they told him the words of the Elder they had chanced to meet. The brethren, hearing a description of the Elder's appearance, told them that they had encountered St Moses himself.

After many years of monastic exploits, St Moses was ordained deacon. The bishop clothed him in white vestments and said, "Now Abba Moses is entirely white!" The saint replied, "Only outwardly, for God knows that I am still dark within."

Through humility, the saint believed himself unworthy of the office of deacon. Once, the bishop decided to test him and he bade the clergy to drive him out of the altar, reviling him as an unworthy Ethiopian. In all humility, the monk accepted the abuse. Having put him to the test, the bishop then ordained St Moses to be presbyter. St Moses labored for fifteen years in this rank, and gathered around himself 75 disciples.

When the saint reached age 75, he warned his monks that soon brigands would descend upon the skete and murder all that were there. The saint blessed his monks to leave, in order to avoid violent death. His disciples began to beseech the monk to leave with them, but he replied: "For many years already I have awaited the time when therethe words which my Master, the Lord Jesus Christ, should be fulfilled: "All who take up the sword, shall perish by the sword" (Mt. 26: 52). After this, seven of the brethren remained with the monk, and one of them hid nearby during the attack of the robbers. The robbers killed St Moses and the six monks who remained with him. Their death occurred in about the year 400.

Dweller of the desert and angel in the body,
you were shown to be a wonder-worker, our God-bearing Father Moses.
You received heavenly gifts through fasting, vigil, and prayer:
healing the sick and the souls of those drawn to you by faith.
Glory to Him who gave you strength!
Glory to Him who who grant granted you a crown!
Glory to Him who through you grants healing to all!

Your mind was filled
with a holy inspiration from God,
turning you from the lust and pleasures of the flesh,
and bringing you to the height of the city of God!
Holy father Moses,
intercede with Christ God that He may grant us great mercy. 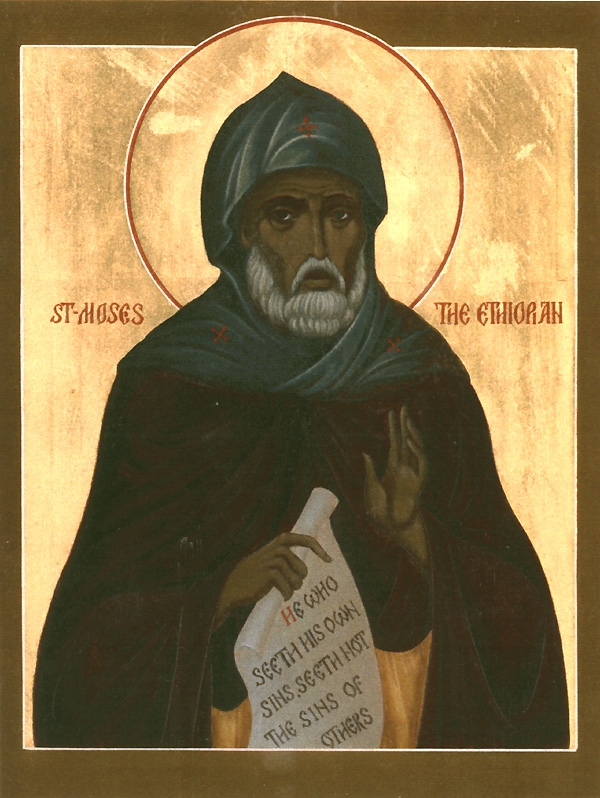 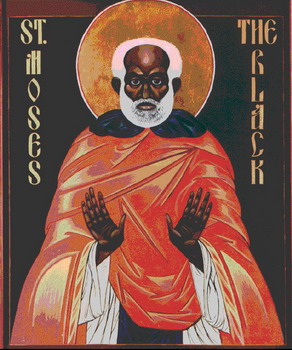