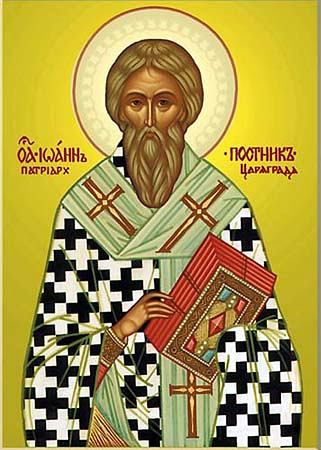 Saint John IV the Faster, Patriarch of Constantinople (582-595), is famed in the Orthodox Church as the compiler of a penitential nomokanon (i.e. rule for penances), which has come down to us in several distinct versions, but their foundation is one and the same. These are instructions for priests on how to hear the confession of secret sins, whether sins already committed, or merely sins of intent.

Ancient church rules address the manner and duration of public penances, established for obvious and evident sinners. But it was necessary to adapt these rules for the secret confession of undetected things. St John the Faster issued his penitential nomokanon (or "Canonaria"), so that the confession of secret sins, unknown to the world, already testifies to the good disposition of the sinner and his conscience in being reconciled to God, and so the saint reduced the penances of the ancient Fathers by half or more.

On the other hand, he set more exactly the character of the penances: severe fasting, daily performance of a set number of prostrations to the ground, the distribution of alms, etc. The length of penance is determined by the priest. The main purpose of the nomocanon compiled by the holy Patriarch consists in assigning penances, not simply according to the seriousness of the sins, but according to the degree of repentance and the spiritual state of the person who confesses.

Among the Greeks, and later in the Russian Church, the rules of St John the Faster are honored on a level "with other saintly rules," and the nomocanons of his book are accounted "applicable for all the Orthodox Church." St Nicodemus of the Holy Mountain (July 14) included him in the Manual for Confession (Exomologitarion), first published in 1794, and in the Rudder (Pedalion), published in 1800.

The first Slavonic translation was done quite possibly by the holy Equal of the Apostles Methodius, at the same time as he produced the Nomocanon in 50 Titles of the holy Patriarch John Scholastikos, whose successor on the Constantinople cathedra-seat was St John the Faster. This ancient translation was preserved in Rus in the "Ustiug Rudder" of the thirteenth century, published in 1902.

From the sixteenth century in the Russian Church the nomocanon of St John the Faster was circulated in another redaction, compiled by the monks and clergy of Mount Athos. In this form it was repeatedly published at the Kiev Caves Lavra (in 1620, 1624, 1629).