The Beginning of the Church's Year 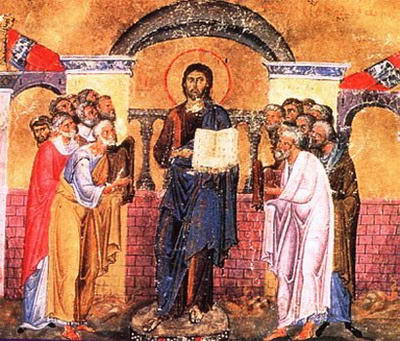 The first day of the Church New Year is also called the beginning of the Indiction. The term Indiction comes from a Latin word meaning, "to impose." It was originally applied to the imposition of taxes in Egypt. The first worldwide Indiction was in 312 when the Emperor Constantine (May 21) saw a miraculous vision of the Cross in the sky. Before the introduction of the Julian calendar, Rome began the New Year on September 1.

According to Holy Tradition, Christ entered the synagogue on September 1 to announce His mission to mankind (Luke 4:16-22). Quoting Isaiah 61:1-2), the Savior proclaimed, "The spirit of the Lord is upon me; because He has anointed me to preach the gospel to the poor; He has sent me to proclaim release to captives, and recovering of sight to the blind, to set at liberty those who are oppressed, to proclaim the acceptable year of the Lord…" This scene is depicted in a Vatican manuscript (Vatican, Biblioteca. Cod. Gr. 1613, p.1).

Tradition says that the Hebrews entered the Promised Land in September.