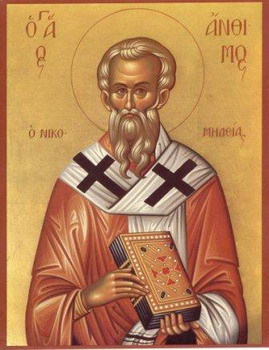 The Hieromartyr Anthimus, Bishop of Nicomedia, and those with him suffered during the persecution against Christians under the emperors Diocletian (284-305) and Maximian (305-311). The persecution became particularly intense after a fire at the imperial court at Nicomedia. The pagans accused the Christians of setting the fire and reacted against them with terrible ferocity.

In Nicomedia alone, on the day of the Nativity of Christ, as many as twenty thousand Christians were burned inside a church. However, this monstrous inhumanity did not frighten the Christians, who firmly confessed their faith and endured martyrdom for Christ.

Sts Dorotheus, Mardonius, Migdonius, Peter, Indes and Gorgonius died during this period. One of them was beheaded by the sword, others perished by burning, or being buried alive, or by drowning in the sea. The soldier Zeno boldly denounced the emperor Maximian, for which he was stoned, and then beheaded.

Then the holy Virgin Martyr Domna, a former pagan priestess, perished at the hands of the pagans, and also St Euthymius, because of their concern that the bodies of the holy martyrs should be buried. Bishop Anthimus, who headed the Church of Nicomedia, hid himself in a village not far from Nicomedia at the request of his flock. From there he sent letters to the Christians, urging them to cleave firmly to the holy Faith and not to fear tortures.

One of his letters, sent with Deacon Theophilus, was intercepted and given to the emperor Maximian. Theophilus was interrogated and died under torture, without revealing to his torturers the whereabouts of Bishop Anthimus. After a while Maximian managed to learn where St Anthimus was, and sent a detachment of soldiers after him.

The bishop met them along the way, but the soldiers did not recognize the saint. He invited them to join him and provided a meal, after which he revealed that he was the one they sought. The soldiers did not know what to do. They wanted to leave him and tell the emperor that they had not found him. Bishop Anthimus was not one to tolerate a lie, and so he would not consent to this.

The soldiers came to believe in Christ and received holy Baptism. The saint ordered them to carry out the emperor's instructions. When Bishop Anthimus was brought before the emperor, the emperor ordered that the instruments of execution be brought out and placed before him. "Do you think, emperor, to frighten me with these tools of execution?" asked the saint. "No indeed, you cannot frighten one who wishes to die for Christ! Execution is frightening only for the cowardly, for whom the present life is most precious." The emperor then directed that the saint be fiercely tortured and beheaded by the sword.

Bishop Anthimus joyfully glorified God with his last breath, and received the crown of martyrdom. (See December 28 for another account of the Nicomedian martyrs.)

You protected your flock with your blood,
Not fearing your adversaries.
Now you rejoice in heaven standing before the throne.
Glory to Christ who has strengthened you;
Glory to your courage;
Glory to your endurance, O holy Hieromartyr Anthimus!

By sharing in the ways of the Apostles,
you became you became a successor to their throne.
Through the practice of virtue,
you found the way to divine contemplation, O inspired one of God;
by teaching the word of truth without error, you defended the Faith,
even to the shedding of your blood.
Hieromartyr Anthimus, entreat Christ God to save our souls.

Illustrious priest and steadfast martyr,
Anthimus, worthy of praise:
You assailed the worship of idols,
And championed your flock which fervently cries to you:
By your prayers deliver us from dangers!

Living honorably as a priest,
you completed the course of martyrdom;
you extinguished the worship of idols
and became a champion of your flock, divinely-wise one.
Therefore, we honor you,
mystically crying out:
"Through your prayers deliver us from calamity, ever-memorable Anthimus."