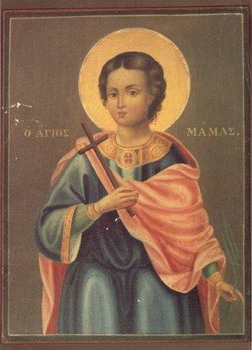 The Holy Great Martyr Mamas was born in Paphlagonia, Asia Minor in the third century of pious and illustrious parents, the Christians Theodotus and Rufina. The parents of the saint were arrested by the pagans for their open confession of their faith and locked up in prison in Caesarea in Cappadocia.

Knowing his own bodily weakness, Theodotus prayed that the Lord would take him before being subjected to tortures. The Lord heard his prayer and he died in prison. St Rufina died also after him, after giving birth to a premature son. She entrusted him to God, beseeching Him to be the Protector and Defender of the orphaned infant.

God heard the dying prayer of St Rufina: a rich Christian widow named Ammia reverently buried the bodies of Sts Theodotus and Rufina, and she took the boy into her own home and raised him as her own son. St Mamas grew up in the Christian Faith. His foster mother concerned herself with the developing of his natural abilities, and early on she sent him off to study his grammar.

The boy learned easily and willingly. He was not of an age of mature judgment but distinguished himself by maturity of mind and of heart. By means of prudent conversations and personal example young Mamas converted many of his own peers to Christianity.

The governor, Democritus, was informed of this, and the fifteen-year-old Mamas was arrested and brought to trial. In deference to his illustrious parentage, Democritus decided not to subject him to torture, but instead sent him off to the emperor Aurelian (270-275). The emperor tried at first kindly, but then with threats to turn St Mamas back to the pagan faith, but all in vain. The saint bravely confessed himself a Christian and pointed out the madness of the pagans in their worship of lifeless idols.

Infuriated, the emperor subjected the youth to cruel tortures. They tried to drown the saint, but an angel of the Lord saved St Mamas and bade him live on a high mountain in the wilderness, not far from Caesarea. Bowing to the will of God, the saint built a small church there and began to lead a life of strict temperance, in exploits of fasting and prayer.

Soon he received a remarkable power over the forces of nature: wild beasts inhabiting the surrounding wilderness gathered at his abode and listened to the reading of the Holy Gospel. St Mamas nourished himself on the milk of wild goats and deer.

The saint did not ignore the needs of his neighbors. Preparing cheese from this milk, he gave it away freely to the poor. Soon the fame of St Mamas's life spread throughout all of Caesarea.

The governor sent a detachment of soldiers to arrest him. When they encountered St Mamas on the mountain, the soldiers did not recognize him, and mistook him for a simple shepherd. The saint then invited them to his dwelling, gave them a drink of milk and then told them his name, knowing that death for Christ awaited him. The servant of God told the servant of the Emperor to go on ahead of him into Caesaria, promising that he would soon follow. The soldiers waited for him at the gates of the city, and St Mamas, accompanied by a lion, met them there.

Surrendering himself into the hands of the torturers, St Mamas was brought to trial under a deputy governor named Alexander, who subjected him to intense and prolonged tortures. They did not break the saint's will, however. He was strengthened by the words addressed to him from above: "Be strong and take courage, Mamas."

When they threw St Mamas to the wild beasts, these creatures would not touch him. Finally, one of the pagan priests struck him with a trident. Mortally wounded, St Mamas went out beyond the city limits. There, in a small stone cave, he gave up his spirit to God, Who in the hearing of all summoned the holy Martyr Mamas into His heavenly habitation. He was buried by believers at the place of his death.

Christians soon began to receive help from him in their afflictions and sorrows. St Basil the Great speaks thus about the holy Martyr Mamas in a sermon to the people: "Remember the holy martyr, you who live here and have him as a helper. You who call on his name have been helped by him. Those in error he has guided into life. Those whom he has healed of infirmity, those whose children were dead he has restored to life, those whose life he has prolonged: let us all come together as one, and praise the martyr!"

Your holy martyr Mamas, O Lord,
through his suffering has received an incorruptible crown from You, our God.
For having Your strength, he laid low low his adversaries,
and shattered the powerless boldness of demons.
Through his intercessions, save our souls!

Podoben: “Today the Virgin...”
Holy Mamas, lead your people your as a flock to life-giving pastures
with the staff God has given you;
crush the invisible and fierce enemies beneath the feet of those who honor
you.
For all of those who are in danger
have received you as their fervent intercessor. 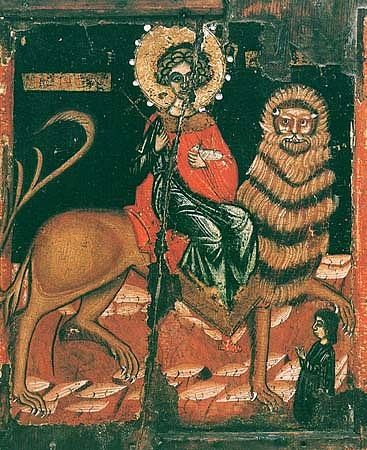 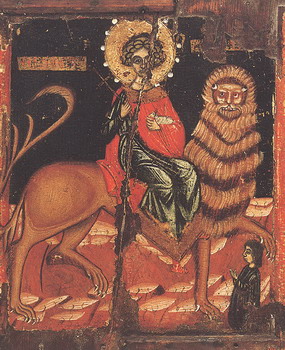