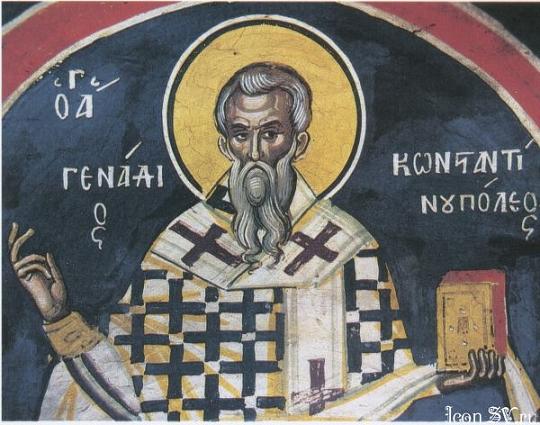 St Gennadius was distinguished for his mildness, tolerance, purity and abstinence. One may get some idea of the power of his prayer from the following instance: in the church of the holy Martyr Eleutherius at Constantinople was a disreputable reader Charisius, spending his life in idleness, impurity and even occupying himself with murder and sorcery. For a long time, St Gennadius admonished him with gentleness and patience, but Charisius did not change his conduct. The Patriarch resorted to strictness and gave orders to chastize and discipline the disreputable cleric. But even after the punishment, he did not correct himself.

Patriarch Gennadius then sent his emissary in his name to the holy Martyr Eleutherius (August 4) in whose church Charisius served as a reader. Entering the temple, the emissary of the Patriarch came before the altar, stretched out his hand to the grave of the martyr and said: "Holy Martyr Eleutherius! Patriarch Gennadius declares to you, through me a sinner, that the cleric Charisius, serving in your temple, does much iniquity and creates great scandal; therefore, either improve him or cut him off from the Church."

On the following morning, Charisius was found dead.

Another instance, displaying the great strength of prayer of St Gennadius, occurred with one of the portrait painters who dared to paint an image of Christ, giving the Savior the features of the pagan god Zeus. The hand of the painter, having done such blasphemy, immediately withered. The repentant painter was brought in the church and confessed all his sins to the Patriarch. St Gennadius prayed over the sinner, and the hand of the painter was healed.

To settle iniquitous actions and false teachings arising in the Church, St Gennadius summoned a local Council which condemned the Eutychian heresy and prohibited simony (ordination for a payment of money). The saint would not ordain a man to the priesthood unless he was quite knowledgeable in Holy Scripture, and knew the Psalter by heart.

During the patriarchate of St Gennadius, a temple was built in honor of St John the Forerunner. Then a certain senator Studius of Rome founded a monastery which later became known as the Studion. The church steward under the holy Patriarch Gennadius was St Marcian (January 10). The Patriarch also ordained St Daniel the Stylite (December 11) to the priesthood.

St Gennadius was the author of dialogues and commentaries on the Prophet Daniel (the works have not survived). There is also his Encyclical Against Simony, affirmed by a Council of the year 459. St Gennadius governed the Church of Constantinople for thirteen years. He died peacefully in the year 471.

One night while he was praying, it was revealed to the saint that a powerful enemy would fall upon his flock. He incessantly offered up prayer for the peace of the Church, that the Lord would preserve it invincible against the gates of Hades.