The Holy Martyr Anthusa, and others with her 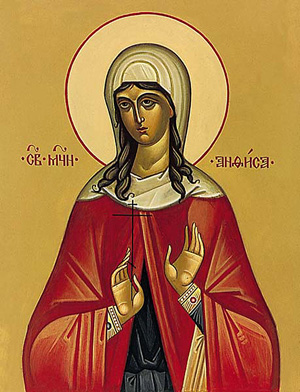 The Hieromartyr Athanasius, bishop of the Cilician city of Tarsus, who baptized the holy Nun Anthusa, was beheaded by the sword under the emperor Aurelian (270-275).

St Anthusa, a native of the city of Seleucia (in Syria), was the daughter of illustrious pagans. Learning of the teachings of Christ, she under pretense of visiting her benefactress, journeyed instead to Tarsus to St Athanasius and received Baptism from him.

Her parents were enraged at their daughter for becoming a Christian. She received monastic tonsure from St Athanasius, then settled in the desert, where she spent 33 years at ascetic deeds. She died at the end of the third century while she was praying. The Martyrs Charisimos and Neophytus, who had been baptized together with the Nun Anthusa, were her servants, and they too accepted death for Christ.