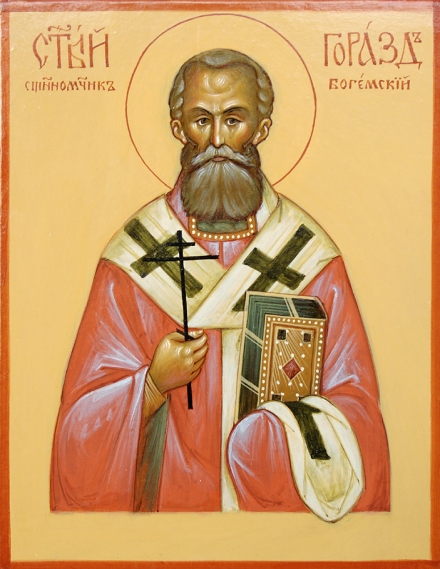 Matthias Pavlik was born in 1879 in the Moravian town of Hrubavrbka in what would later become the Czech Republic. He was born into a Roman Catholic family, completed the Roman Catholic seminary in Olomouc and was ordained a priest. With the end of World War I and the formation of the new nation of Czechoslovakia from the ruins of the Austro-Hungarian Empire, the laws requiring observance of the Catholic religion were loosened. Father Matthias, along with thousands of others left the Catholic Church with many seeking a home in the Orthodox Church, which in that region was then under the protection of the Orthodox Church of Serbia. Taking monastic vows, he assumed the name of “Gorazd” who was a disciple of Sts. Cyril and Methodius and who succeeded St. Methodius as the bishop of Moravia. At the age of 42, Father Gorazd was consecrated an Orthodox bishop in Belgrade Serbia by the Serbian Patriarch Dimitri along with the illustrious Metropolitan Anthony Khrapovitsky of Kiev and several other bishops including Bishop Dositheus of Zagreb. Bishop Dositheus was a key figure in the re-birth of the Orthodox Church among Carpatho-Rusyns and was glorified as a saint of the Orthodox Church in May, 2000.

Bishop Gorazd immediately set to work building up the Orthodox Faith, building eleven churches and two chapels, translating service books into the Czech language. He paid particular attention to the Carpatho-Rusyns in the eastern part of the Czech Republic who were also returning to the Orthodox Faith of their ancestors. In that region, in 1934 he took part in the 20th anniversary commemoration of the Marmarosh-Sigotsky trial. This trial occurred in 1914 when 94 Carpatho-Rusyn Orthodox together with their priest, St. Alexis Kabaluk were tried for treason for renouncing the Greek Catholic Faith and embracing Orthodoxy.

For twenty years, the bishop faithfully cared for his flock as a good shepherd. He remained faithful to the Orthodox Faith despite attempts by many Catholics to persuade him to renounce Orthodoxy. When many Roman Catholic priests rose up against him, the Catholic Bishop Stoian said: Leave Pavlik alone, you are not worthy to tie his laces, it would be good if everyone were like Pavlik.

When the German Nazis invaded and conquered Czechoslovakia in 1938, the Orthodox Church was placed under the Orthodox metropolitan of Berlin, Germany, Metropolitan Seraphim (Liade). The German ruler of Czechoslovakia was Reinhard Heydrich, was assassinated on May 27, 1942 by a group of Czech resistance fighters who then were allowed to hide in the crypt of Sts. Cyril and Methodius Orthodox Cathedral. When Bishop Gorazd learned of this he realized what great danger he and his flock were in if the Nazis uncovered this hiding place. Before leaving for Berlin to take part in the consecration of Father Philip Gardner as a bishop, he insisted that the resistance fighters leave the Cathedral and find another place of refuge. But on June 18, the hiding place was revealed after a betrayal and torture, and all members of the group were killed.

The Nazis immediately began massive reprisals. The two Cathedral priests and senior lay officials were arrested. Bishop Gorazd, trying to save his people and his church from destruction, wrote letters to the Nazi authorities taking the blame for the actions in the Cathedral:

I am giving myself up to the authorities and am prepared to face any punishment, including death.

Bishop Gorazd was arrested on June 27, 1942, tortured and executed by firing squad at the Kobylisz Shooting Range on September 4. He was 63 years old. The two Cathedral priests were also shot. Along with the priests and bishop, a total of 550 people were executed by the Nazis in reprisal for the assassination. In one particularly heinous act, the entire village of Lidice was exterminated. All of the men were executed, the women and children placed in labor camps, and all village dwellings destroyed. Following the martyrdom of the bishop, the Orthodox Church in Bohemia and Moravia was suppressed and all churches closed. Orthodox priests were exiled to forced labor camps in Germany.

Because Bishop Gorazd willingly laid down his life in order to protect his flock, he was recognized by the Orthodox Church of Serbia as a new martyr on May 4, 1961. On August 24, 1987 he was glorified in the Cathedral of St. Gorazd in Olomouc Moravia. His feastday is observed on the day of his martyrdom, September 4. Today, at the site of his martyrdom at the Kobylisz Shooting Range, a monument has been erected in his memory and those others who suffered at the hands of the Nazis. 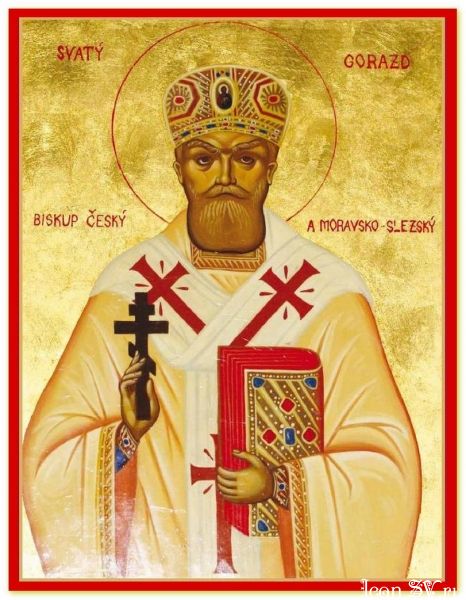