The Martyr Andrew Stratelates was a military commander in the Roman army during the reign of the emperor Maximian (284-305). They loved him in the Roman army because of his bravery, invincibility and sense of fairness. When a large Persian army invaded the Syrian territories, the governor Antiochus entrusted St Andrew with the command of the Roman army, giving him the title of "Stratelates" ("Commander"). St Andrew selected a small detachment of brave soldiers and proceeded against the adversary.

His soldiers were pagans, and St Andrew himself had still not accepted Baptism, but he believed in Jesus Christ. Before the conflict he persuaded the soldiers that the pagan gods were demons and could not help them in battle. He proclaimed to them Jesus Christ, the omnipotent God of Heaven and earth, giving help to all who believe in Him.

The soldiers went into battle, calling on the help of the Savior. The small detachment routed the numerous host of the Persians. St Andrew returned from the campaign in glory, having gained a total victory. But jealous men denounced him to the governor Antiochus, saying that he was a Christian who had converted the soldiers under his command to his faith.

St Andrew was summoned to trial, and there he declared his faith in Christ. For this they subjected him to torture. He laid himself upon a bed of white-hot copper, but as soon as he sought help from the Lord, the bed became cool. They crucified his soldiers on trees, but not one of them renounced Christ. Locking the saints away in prison, Antiochus sent the report of charges on to the emperor, unable to decide whether to impose the death sentence upon the acclaimed champion. The emperor knew how the army loved St Andrew, and fearing a rebellion, he gave orders to free the martyrs. Secretly, however, he ordered that each be executed on some pretext.

After being freed, St Andrew went went to the city of Tarsus with his fellow soldiers. There the local bishop Peter and Bishop Nonos of Beroea baptized them. Then the soldiers proceeded on to the vicinity of Taxanata. Antiochus wrote a letter to Seleucus, governor of the Cilicia region, ordering him to overtake the company of St Andrew and kill them, under the pretext that they had deserted their military standards.

Seleucus came upon the martyrs in the passes of Mount Tauros, where they were evidently soon to suffer. St Andrew, calling the soldiers his brothers and children, urged them not to fear death. He prayed for all who would honor their memory, and asked the Lord to create a curative spring on the place where their blood would be shed.

At the time of this prayer the steadfast martyrs were beheaded with swords. During this time, a spring of water issued forth from the ground. Bishops Peter and Nonos, with their clergy, secretly followed the company of St Andrew, and buried their bodies. One of the clergy, suffering for a long time from an evil spirit, drank from the spring of water, and at once he was healed. Reports of this spread among the local people and they began to come to the spring. Through the prayers of St Andrew and the 2593 Martyrs suffering with him, they received gracious help from God.

Troparion - Tone 5
You renounced the glory of earthly rank
and inherit ed the kingdom of heaven;
you adorned your incorruptible crown as with beautiful stones.
You led an army of martyrs to Christ,
and with the angels in the never-fading light
you found Christ the never-setting sun.
Together with those who suffered with you,
holy general Andrew,
ever pray to Him that He may save our souls.

Kontakion - Tone 4
Standing before the Lord in prayer like a star near the sun,
you were filled with ineffable joy beholding your desire: the treasure of the kingdom.
You sing without ceasing to the immortal King
together with the angels throughout the ages.
With them, general Andrew, unceasingly pray for us all. 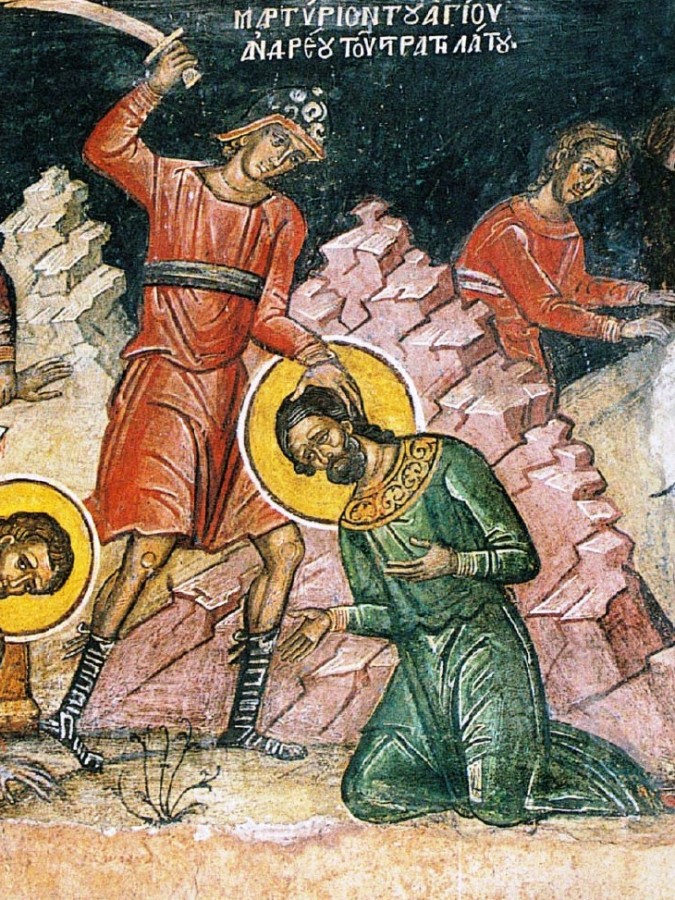