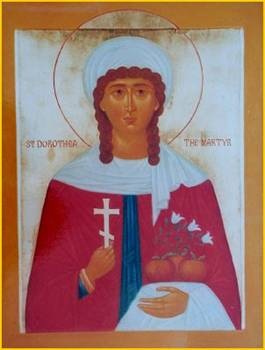 The Holy Martyr Dorothy, the Martyrs Christina, Callista and the Martyr Theophilus lived in Caesarea of Cappadocia and suffered under the emperor Diocletian in either the year 288 or 300.

St Dorothy was a pious Christian maiden, distinguished by her great beauty, humility, prudence, and God-given wisdom, which astonished many. Arrested upon orders of the governor Sapricius, she steadfastly confessed her faith in Christ and was subjected to tortures.

Failing to break the will of the saint, the governor sent to her two women, the sisters Christina and Callista, who once were Christians, but fearing torture, they renounced Christ and began to lead impious lives. He ordered them to get St Dorothy to offer sacrifice to the pagan gods, but just the reverse happened. St Dorothy convinced them that the mercy of God is granted to all who repent, so they corrected themselves and returned to Christ. The tormentors tied them back to back and burned them in a vat of tar. Through martyrdom, Christina and Callista atoned for their sin of apostasy, receiving from God not only forgiveness, but crowns of victory.

St Dorothy was again subjected to tortures, but she gladly endured them and accepted the death sentence. She cried out with joy, thanking Christ for calling her to Paradise and to the heavenly bridal chamber. As they led the saint to execution Theophilus, one of the governor's counselors, laughed and said to her, "Bride of Christ, send me an apple and some roses from the Paradise of your Bridegroom." The martyr nodded and said, "I shall do that."

At the place of execution, the saint requested a little time to pray. When she finished the prayer, an angel appeared before her in the form of a handsome child presenting her three apples and three roses on a pure linen cloth. The saint requested that these be given to Theophilus, after which she was beheaded by the sword.

Having received the gracious gift, the recent mocker of Christians was shaken, and he confessed Christ as the true God. His friends were astonished, and wondered whether he were joking, or perhaps mad. He assured them he was not joking. Then they asked the reason for this sudden change. He asked what month it was. "February," they replied. "In the winter, Cappadocia is covered with ice and frost, and the trees are bare of leaves. What do you think? From where do these apples and flowers come?" After being subjected to cruel tortures, St Theophilus was beheaded with a sword.

The relics of St Dorothy are in Rome in the church dedicated to her, and her head is also at Rome, in a church of the Mother of God at Trastevero.

Your lamb Dorothy, calls out to You, O Jesus, in a loud voice:
"I love You, my Bridegroom, Bridegroom, and in seeking You I endure endure suffering.
In baptism I was crucified so that I might reign in You, and I died so that I might live with You.
Accept me as a pure sacrifice,
for I have offered offered myself in love."
Through her prayers save our souls, since You are merciful. 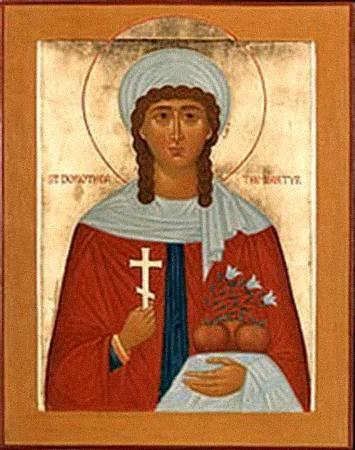