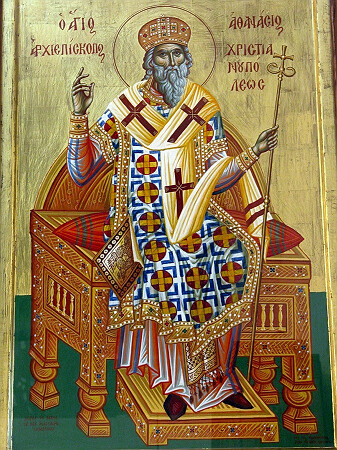 Saints Athanasius and Cyril were Archbishops of Alexandria. These wise teachers of truth and defenders of Christ's Church share a joint Feast in recognition of their dogmatic writings which affirm the truth of the Orthodox Faith, correctly interpret the Holy Scripture, and censure the delusions of the heretics.

St Athanasius took part in the First Ecumenical Council when he was still a deacon. He surpassed everyone there in his zeal to uphold the teaching that Christ is consubstantial (homoousios) with the Father, and not merely a creature, as the Arians proclaimed.

This radiant beacon of Orthodoxy spent most of his life in exile from his See, because of the plotting of his enemies. He returned to his flock as he was approaching the end of his life. Like an evening star, he illumined the Orthodox faithful with his words for a little while, then reposed in 373. He is also commemorated on May 2 (the transfer of his holy relics).

You shone forth with works of Orthodoxy and quenched all heresy,
and became victorious trophy-bearers, hierarchs Athanasius and Cyril.
You enriched all things with piety and greatly adorned the Church,
and worthily found Christ God,
who grants His great mercy to all.

Athanasius and Cyril, great hierarchs of true piety, and noble champions of the Church of Christ,
preserve all who sing:
"O Compassionate Lord, save those who honor You."