Our Holy Father Serapion the Sindonite 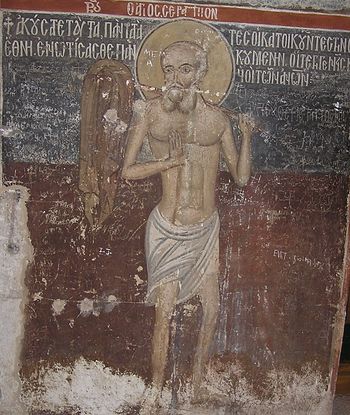 Saint Serapion lived during the fifth century in Egypt. He was called the linen cloth-wearer (Sindonite) since he wore only a coarse linen garb called a "sindon." From his youth the monk lived like the birds of the air, without a shelter.

For several days at a time he did not eat, not having the means to buy bread. He gave away his sindon to a beggar who was shivering from the cold, and he himself was naked.

A certain Greek philosopher, wishing to test the non-covetousness of the monk, gave him a gold coin and watched him. The saint went to the bakery, bought one loaf of bread, gave the merchant the gold coin and left, having no regard for the value of the money.

St Serapion led many on the way of salvation. Once, he was the servant of a Greek actor, whom he converted to Christ. The actor, imitating the example of the holy life of the saint, believed and was baptized together with all his family. He asked St Serapion to remain with him not as a servant, but as a guide and friend, but the monk went away, not taking any of the money offered him.

Traveling to Rome, St Serapion got on a ship, but paid nothing to the ship owners. At first they began to reproach him for this, but noticing that the Elder had gone five days already without eating, they began to feed him for the sake of God, and in this they fulfilled the command of the Lord.

At Rome, the saint continued to wander about, going from house to house, having nothing, accumulating only spiritual wealth for himself and for his neighbor.