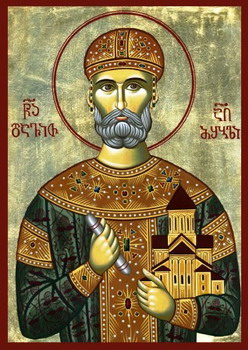 At the end of the 11th century the Georgian Church underwent a trial of physically and spiritually catastrophic proportions.

The Seljuk sultan, Jalal al-Dawlah Malik Shah (1073–1092), captured the village of Samshvilde, imprisoned its leader, Ioane Orbeliani, son of Liparit, ravaged Kvemo (Lower) Kartli, and finally captured all of Georgia, despite the isolated victories of King Giorgi II (1072–1089). The fearful Georgians fled their homes to hide in the mountains and forests.

Tempted and deeply distressed by the difficult times, the nation that had once vowed its unconditional love for Christ began to fall into sin and corruption. People of all ages and temperaments sinned against God and turned to the path of perdition. God manifested His wrath toward the Georgian people by sending a terrible earthquake that devastated their Paschal celebrations.

In the year 1089, during this period of devastation and despair, King Giorgi II abdicated, designating his sixteen-year-old only son, Davit (later known as “the Restorer”), heir to the throne. It is written that the Heavenly Father said: I have found David My servant, with My holy oil have I annointed him (Ps. 88:19).

The newly crowned King Davit took upon himself enormous responsibility for the welfare of the Church. He supported the efforts of the Council of Ruisi-Urbnisi to restore and reinforce the authority of the Georgian Church and suppress the conceited feudal lords and unworthy clergymen. During King Davit’s reign, the government’s most significant activities were carried out for the benefit of the Church. At the same time, the Council of Ruisi-Urbnisi reasserted the vital role of the Orthodox Faith in rescuing the Georgian people from the godless mire into which they had sunk.

Foremost among King Davit’s goals at the beginning of his reign was the repatriation of those who had fled Georgia during the Turkish rule. The king summoned his noblemen and began to reunify the nation. The king’s efforts to reunify Georgia began in the eastern region of Kakheti-Hereti, but the Turks and traitorous feudal lords were unwilling to surrender the power they had gained in the area. Nevertheless, King Davit’s army was in God’s hands, and the Georgians fought valiantly against the massive Turkish army. King Davit himself fought like any other soldier: three of his horses were killed, but he mounted a fourth to finish the fight with a fantastic victory. The Turkish presence was eliminated from his country.

Soon, however, the uncompromising Seljuk sultan Mehmed (Muhammad) I of Baghdad (1105–1118) ordered an army of one hundred thousand soldiers to march on Georgia. When King Davit heard of the enemy’s approach, he immediately assembled a force of fifteen hundred men and led them towards Trialeti. A battle began in the early morning, and with God’s help the enemy was defeated. Simultaneously, the king’s adviser, Giorgi of Chqondidi, (Giorgi of Chqondidi was King Davit’s teacher and closest adviser. He held the post of chancellor-procurator. At the council of Ruisi-Urbnisi, King Davit introduced a new law, combining the office of chancellor-procurator with the archbishopric of Chqondidi, the most influential episcopate in Georgia.) recaptured the town of Rustavi, and in 1115 the Georgian army recovered the ravine of the Mtkvari River. One year later, the Turks, who had been encamped between the towns of Karnipori and Basiani, were banished from the country. The “Great Wars” continued, and the holy king was crowned with new victories. Davit’s son Demetre (later the venerable Damiane), a young man distinguished in “wisdom, holiness, appearance and courage,” was a great asset to his father. The prince led a war on Shirvan, captured Kaladzori, and returned to his father with slaves and great riches, the spoils of war in those days. One year later, the villages of Lore and Agarani were rejoined to Georgia.

In spite of his victories, King Davit knew that it would be difficult for his meager army to protect the recovered cities and fortresses, while continuing to serve as a permanent military force. Thus it became necessary to establish a separate, permanent standing army. The wise king planned to draft men from among the Qipchaks, a northern Caucasian tribe, to form this army. He was well acquainted with the character of these people, and confident that they were brave and seasoned in war. Furthermore, Davit’s wife, Queen Gurandukhti, was a daughter of Atrak, the Qipchaks’ ruler. Atrak joyfully agreed to the request of his son-in-law, the king.

As a true diplomat seeking to maintain peaceful relations with the Qipchaks, King Davit took his adviser, Giorgi of Chqondidi, and traveled to the region of Ossetia in the northern Caucasus. There Giorgi of Chqondidi, an “adviser to his master and participant in his great works and victories,” reposed in the Lord. Following this, the dispirited King Davit declared that his kingdom would grieve for forty days. But he accomplished what he had set out to do, and selected forty thousand Qipchaks to add to the five thousand Georgian soldiers he had already enlisted. From that point on King Davit had a standing army of forty-five thousand men.

The king’s enormous army finally uprooted the Turkish presence in and around Georgia permanently. The defeated Turks returned in shame to their sultan in Baghdad, draped in black as a sign of grief and defeat. Nevertheless, the unyielding sultan Mahmud II (1118–1131) rallied a coalition of Muslim countries to attack Georgia. The sultan summoned the Arab leader Durbays bin Sadaka, commanded his own son Malik (1152–1153) to serve him, gathered an army of six hundred thousand men, and marched once more towards Georgia.

It was August of 1121. Before heading off to battle, King Davit inspired his army with these words: “Soldiers of Christ! If we fight bravely for our Faith, we will defeat not only the devil’s servants, but the devil himself. We will gain the greatest weapon of spiritual warfare when we make a covenant with the Almighty God and vow that we would rather die for His love than escape from the enemy. And if any one of us should wish to retreat, let us take branches and block the entrance to the gorge to prevent this. When the enemy approaches, let us attack fiercely!”

None of the soldiers thought of retreating. The king’s stunning battle tactics and the miracles of God terrified the enemy. As it is written, “The hand of God empowered him, and the Great-martyr George visibly led him in battle. The king annihilated the godless enemy with his powerful right hand.”

The battle at Didgori enfeebled the enemy for many years. The following year, in 1122, King Davit recaptured the capital city of Tbilisi, which had borne the yoke of slavery for four hundred years. The king returned the city to its mother country. In 1123 King Davit declared the village of Dmanisi a Georgian possession, and thus, at last, unification of the country was complete.

One victory followed another, as the Lord defended the king who glorified his Creator.

In 1106 King Davit had begun construction of Gelati Monastery in western Georgia, and throughout his life this sacred complex was the focus of his efforts on behalf of the revival of the Georgian Church. Gelati Monastery was the most glorious of all the existing temples to God. To beautify the building, King Davit offered many of the great treasures he had acquired as spoils of war. Then he gathered all the wise, upright, generous, and pious people from among his kinsmen and from abroad and established the Gelati Theological Academy. King Davit helped many people in Georgian churches both inside and outside his kingdom. The benevolent king constructed a primitive ambulance for the sick and provided everything necessary for their recovery. He visited the infirm, encouraging them and caring for them like a father. The king always took with him a small pouch in which he carried alms for the poor.

The intelligent and well-lettered king spent his free time reading the Holy Scriptures and studying the sciences. He even carried his books with him to war, soliciting the help of donkeys and camels to transport his library. When he tired of reading, King Davit had others read to him, while he listened attentively. One of the king’s biographers recalls, “Each time Davit finished reading the Epistles, he put a mark on the last page. At the end of one year, we counted that he had read them twenty-four times.”

King Davit was also an exemplary writer. His “Hymns of Repentance” are equal in merit to the works of the greatest writers of the Church.

This most valiant, powerful, and righteous Georgian king left his heirs with a brilliant confession when he died. It recalled all the sins he had committed with profound lamentation and beseeched the Almighty God for forgiveness.

King Davit completed his will in 1125, and in the same year he abdicated and designated his son Demetre to be his successor. He entrusted his son with a sword, blessed his future, and wished him many years in good health and service to the Lord. The king reposed peacefully at the age of fifty-three.

St. Davit the Restorer was buried at the entrance to Gelati Monastery. His final wish was carved in the stone of his grave: This is My rest for ever and ever; here I will dwell, for I have chosen her (Ps. 131:15).