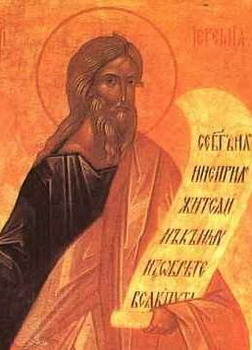 The Holy Prophet Jeremiah, one of the four great Old Testament prophets, was son of the priest Helkiah from the city of Anathoth near Jerusalem, and he lived 600 years before the Birth of Christ, under the Israelite king Josiah and four of his successors. He was called to prophetic service at the age of fifteen, when the Lord revealed to him that even before his birth the Lord had chosen him to be a prophet. Jeremiah refused, citing his youth and lack of skill at speaking, but the Lord promised to be always with him and to watch over him.

He touched the mouth of the chosen one and said, "Behold, I have put My words into your mouth. Behold, I have appointed you this day over nations and kingdoms, to root out and to pull down, to destroy and to rebuild, and to plant" (Jer. 1:9-10). From that time Jeremiah prophesied for twenty-three years, denouncing the Jews for abandoning the true God and worshipping idols, predicting sorrows and devastating wars. He stood by the gates of the city, and at the entrance to the Temple, everywhere where the people gathered, and he exhorted them with imprecations and often with tears. The people, however, mocked and abused him, and they even tried to kill him.

Depicting for the Jews their impending enslavement to the king of Babylon, Jeremiah first placed on his own neck a wooden, and then an iron yoke, and thus he went about among the people. Enraged at the dire predictions of the prophet, the Jewish elders threw the Prophet Jeremiah into a pit filled with horrid, slimy creatures, where he almost died. Through the intercession of the God-fearing royal official Habdemelek, the prophet was pulled out of the pit, but he did not cease his prophecies, and for this he was carted off to prison. Under the Jewish king Zedekiah his prophecy was fulfilled.

Nebuchadnezzar came, slaughtered many people, carried off a remnant into captivity, and Jerusalem was pillaged and destroyed. Nebuchadnezzar released the prophet from prison and permitted him to live where he wanted. The prophet remained at the ruins of Jerusalem and bewailed his nation's misfortune. According to Tradition, the Prophet Jeremiah took the Ark of the Covenant with the Tablets of the Law and hid it in one of the caves of Mount Nabath (Nebo), so that the Jews could no longer find it (2 Mac. 2). Afterwards, a new Ark of the Covenant was fashioned, but it lacked the glory of the first.

Among the Jews remaining in their fatherland there soon arose internecine clashes: Hodoliah, Nebuchadnezzar's viceroy, was murdered. The Jews, fearing the wrath of Babylon, decided to flee into Egypt. The Prophet Jeremiah disagreed with their intention, predicting that the punishment which they feared would befall them in Egypt. The Jews would not listen to the prophet, however, and taking him along by force, they went into Egypt and settled in the city of Tathnis. There the prophet lived for four years and was respected by the Egyptians, because by his prayers he killed crocodiles and other creatures infesting these parts. When Jeremiah prophesied that the King of Babylon would invade Egypt and annihilate the Jews living there, the Jews murdered him. In that very same year the saint's prophecy was fulfilled. There is a tradition that 250 years later, Alexander the Great transported the relics of the holy Prophet Jeremiah to Alexandria.

The Prophet Jeremiah wrote his Book of Prophecies and also the Book of Lamentations about the desolation of Jerusalem and the Exile. The times in which he lived and prophesied are described in 4/2 Kings (Ch. 23-25) and in the Second Book of Chronicles (36:12) and in 2 Maccabbees (Ch. 2).

In the Gospel of Matthew it is said that the betrayal of Judas was foretold by the Prophet Jeremiah, "And they took thirty pieces of silver, the price of him on whom the sons of Israel had set a price, and they gave them for the potter's field, as the Lord directed me" (Mt. 27:9-10). Perhaps Jeremiah 32:6-15 is meant.

Even after his death, the Prophet Jeremiah was regarded as a wonderworker. Dust from his tomb was believed to cure snake-bite, and many Christians pray to him for this purpose.

Celebrating the memory
of Your Prophet Jeremiah, O Lord,
for his sake, we entreat You to save our souls.

Cleansing your radiant heart through the Spirit,
O great Prophet and Martyr,
glorious Jeremiah,
You received from on high the gift of prophecy.
You cried out with a great voice to the nations:
This is our God, and there is none other beside Him
who became incarnate and appeared on earth. 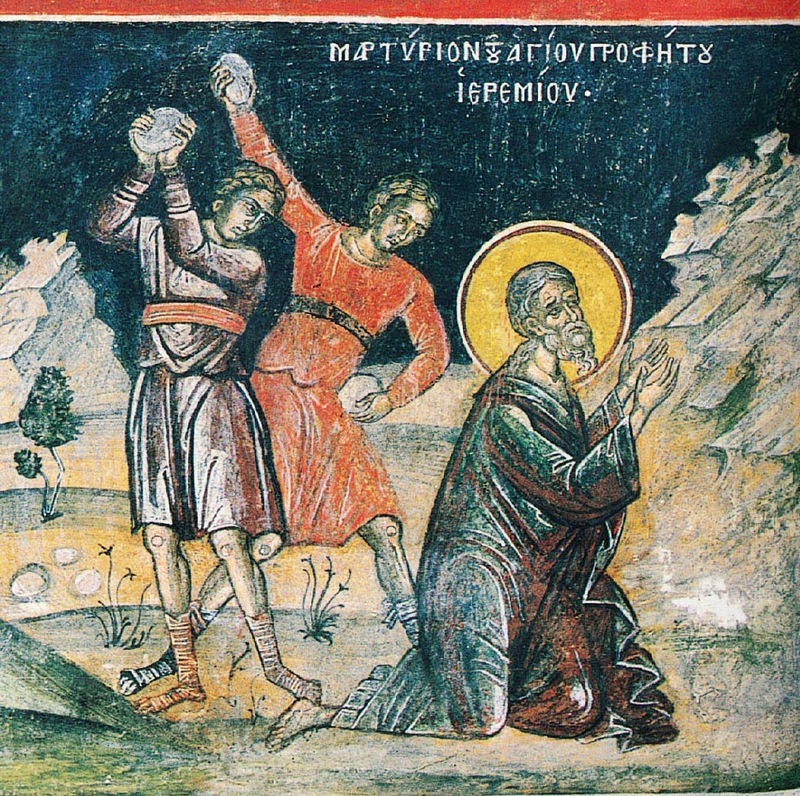