+++ The Holy Emperor Constantine and the Empress Helena 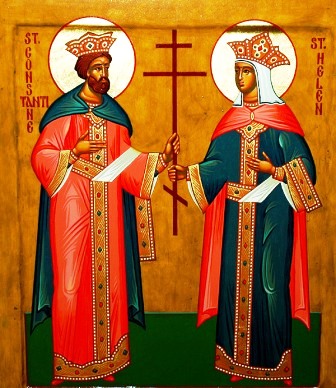 The Church calls St Constantine (306-337) "the Equal of the Apostles," and historians call him "the Great." He was the son o the Caesar Constantius Chlorus (305-306), who governed the lands of Gaul and Britain. His mother was St Helen, a Christian of humble birth.

At this time the immense Roman Empire was divided into Western and Eastern halves, governed by two independent emperors and their corulers called "Caesars." Constantius Chlorus was Caesar in the Western Roman Empire. St Constantine was born in 274, possibly at Nish in Serbia. In 294, Constantius divorced Helen in order to further his political ambition by marrying a woman of noble rank. After he became emperor, Constantine showed his mother great honor and respect, granting her the imperial title "Augusta."

Constantine, the future ruler of all the whole Roman Empire, was raised to respect Christianity. His father did not persecute Christians in the lands he governed. This was at a time when Christians were persecuted throughout the Roman Empire by the emperors Diocletian (284-305) and his corulers Maximian Galerius (305-311) in the East, and the emperor Maximian Hercules (284-305) in the West.

After the death of Constantius Chlorus in 306, Constantine was acclaimed by the army at York as emperor of Gaul and Britain. The first act of the new emperor was to grant the freedom to practice Christianity in the lands subject to him. The pagan Maximian Galerius in the East and the fierce tyrant Maxentius in the West hated Constantine and they plotted to overthrow and kill him, but Constantine bested them in a series of battles, defeating his opponents with the help of God. He prayed to God to give him a sign which would inspire his army to fight valiantly, and the Lord showed him a radiant Sign of the Cross in the heavens with the inscription "In this Sign, conquer."

After Constantine became the sole ruler of the Western Roman Empire, he issued the Edict of Milan in 313 which guaranteed religious tolerance for Christians. St Helen, who was a Christian, may have influenced him in this decision. In 323, when he became the sole ruler of the entire Roman Empire, he extended the provisions of the Edict of Milan to the Eastern half of the Empire. After three hundred years of persecution, Christians could finally practice their faith without fear.

Renouncing paganism, the Emperor did not let his capital remain in ancient Rome, the former center of the pagan realm. He transferred his capital to the East, to the city of Byzantium, which was renamed Constantinople, the city of Constantine (May 11). Constantine was deeply convinced that only Christianity could unify the immense Roman Empire with its diverse peoples. He supported the Church in every way. He recalled Christian confessors from banishment, he built churches, and he showed concern for the clergy.

The emperor deeply revered the victory-bearing Sign of the Cross of the Lord, and also wanted to find the actual Cross upon which our Lord Jesus Christ was crucified. For this purpose he sent his own mother, the holy Empress Helen, to Jerusalem, granting her both power and money. Patriarch Macarius of Jerusalem and St Helen began the search, and through the will of God, the Life-Creating Cross was miraculously discovered in 326. (The account of the finding of the Cross of the Lord is found under the Feast of the Exaltation of the Cross, September 14). The Orthodox Church commemorates the Uncovering of the Precious Cross and the Precious Nails by the Holy Empress Helen on March 6.

While in Palestine, the holy empress did much of benefit for the Church. She ordered that all places connected with the earthly life of the Lord and His All-Pure Mother, should be freed of all traces of paganism, and she commanded that churches should be built at these places.

The emperor Constantine ordered a magnificent church in honor of Christ's Resurrection to be built over His tomb. St Helen gave the Life-Creating Cross to the Patriarch for safe-keeping, and took part of the Cross with her for the emperor. After distributing generous alms at Jerusalem and feeding the needy (at times she even served them herself), the holy Empress Helen returned to Constantinople, where she died in the year 327.

Because of her great services to the Church and her efforts in finding the Life-Creating Cross, the empress Helen is called "the Equal of the Apostles."

The peaceful state of the Christian Church was disturbed by quarrels, dissensions and heresies which had appeared within the Church. Already at the beginning of St Constantine's reign the heresies of the Donatists and the Novatians had arisen in the West. They demanded a second baptism for those who lapsed during the persecutions against Christians. These heresies, repudiated by two local Church councils, were finally condemned at the Council of Milan in 316.

Particularly ruinous for the Church was the rise of the Arian heresy in the East, which denied the Divine Nature of the Son of God, and taught that Jesus Christ was a mere creature. By order of the emperor, the First Ecumenical Council was convened in the city of Nicea in 325.

318 bishops attended this Council. Among its participants were confessor-bishops from the period of the persecutions and many other luminaries of the Church, among whom was St Nicholas of Myra in Lycia. (The account about the Council is found under May 29). The emperor was present at the sessions of the Council. The heresy of Arius was condemned and a Symbol of Faith (Creed) composed, in which was included the term "consubstantial with the Father," confirming the truth of the divinity of Jesus Christ, Who assumed human nature for the redemption of all the human race.

One might possibly be surprised by St Constantine's grasp of theological issues during the discussions at the Council. The term "consubstantial" was included in the Symbol of Faith at his insistence.

After the Council of Nicea, St Constantine continued with his active role in the welfare of the Church. He accepted holy Baptism on his deathbed, having prepared for it all his whole life. St Constantine died on the day of Pentecost in the year 337 and was buried in the church of the Holy Apostles, in a crypt he had prepared for himself.

Having seen the figure of the Cross in the heavens,
and like Paul not having received his call from men, O Lord,
Your apostle among rulers, the Emperor Constantine,
has been set by Your hand as ruler over the Imperial City
that he preserved in peace for many years,
through the prayers of the Theotokos, O only lover of mankind.

Today Constantine and his mother Helen
reveal the precious Cross,
the weapon of the faithful
against their enemies.
For our sakes, it has been shown to be a great sign, and fearsome in battle. 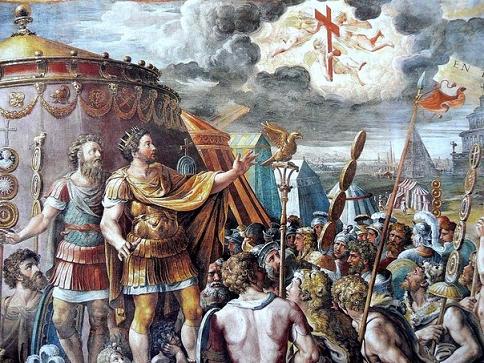 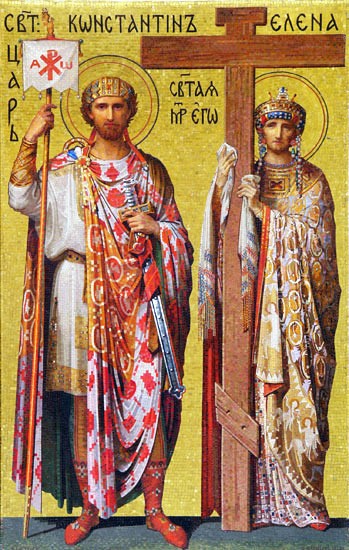 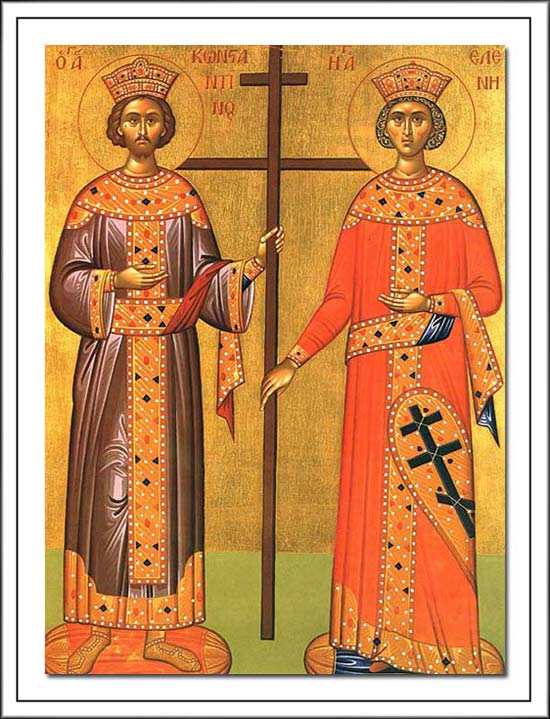 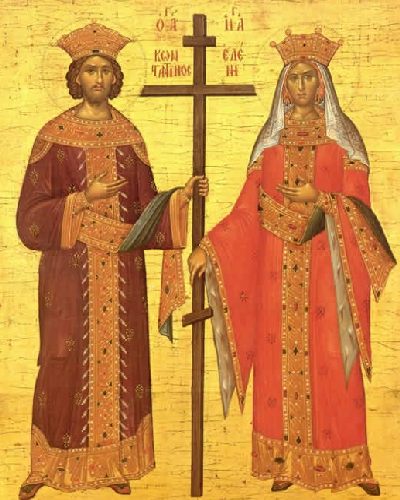 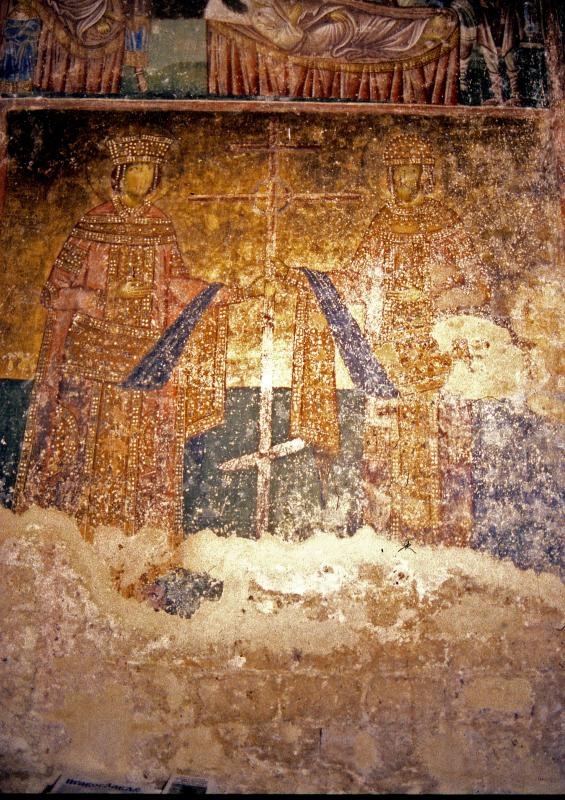