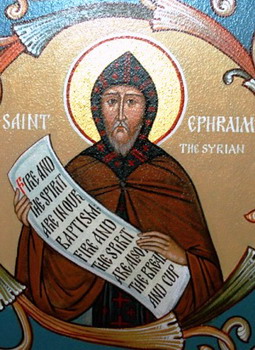 Saint Ephraim the Syrian, a teacher of repentance, was born at the beginning of the fourth century in the city of Nisibis (Mesopotamia) into the family of impoverished toilers of the soil. His parents raised their son in piety, but from his childhood he was known for his quick temper and impetuous character. He often had fights, acted thoughtlessly, and even doubted God’s Providence. He finally recovered his senses by the grace of God, and embarked on the path of repentance and salvation.

Once, he was unjustly accused of stealing a sheep and was thrown into prison. He heard a voice in a dream calling him to repent and correct his life. After this, he was acquitted of the charges and set free.

The young man ran off to the mountains to join the hermits. This form of Christian asceticism had been introduced by a disciple of Saint Anthony the Great, the Egyptian desert dweller Eugenius.

Saint James of Nisibis (January 13) was a noted ascetic, a preacher of Christianity and denouncer of the Arians. Saint Ephraim became one of his disciples. Under the direction of the holy hierarch, Saint Ephraim attained Christian meekness, humility, submission to God’s will, and the strength to undergo various temptations without complaint.

Saint James transformed the wayward youth into a humble and conrite monk. Realizing the great worth of his disciple, he made use of his talents. He trusted him to preach sermons, to instruct children in school, and he took Ephraim with him to the First Ecumenical Council at Nicea (in the year 325). Saint Ephraim was in obedience to Saint James for fourteen years, until the bishop’s death in 338.

After the capture of Nisibis by the Persians in 363, Saint Ephraim went to a monastery near the city of Edessa. Here he saw many great ascetics, passing their lives in prayer and psalmody. Their caves were solitary shelters, and they fed themselves with a certain plant.

He became especially close to the ascetic Julian (October 18), who was of one mind with him. Saint Ephraim combined asceticism with a ceaseless study of the Word of God, taking from it both solace and wisdom for his soul. The Lord gave him a gift of teaching, and people began to come to him, wanting to hear his counsel, which produced compunction in the soul, since he began with self-accusation. Both verbally and in writing, Saint Ephraim instructed everyone in repentance, faith and piety, and he denounced the Arian heresy, which at that time was causing great turmoil. Pagans who heard the preaching of the saint were converted to Christianity.

He also wrote the first Syriac commentary on the Pentateuch (i.e. “Five Books”) of Moses. He wrote many prayers and hymns, thereby enriching the Church’s liturgical services. Famous prayers of Saint Ephraim are to the Most Holy Trinity, to the Son of God, and to the Most Holy Theotokos. He composed hymns for the Twelve Great Feasts of the Lord (the Nativity of Christ, the Baptism, the Resurrection), and funeral hymns. Saint Ephraim’s Prayer of Repentance, “O Lord and Master of my life...”, is recited during Great Lent, and it summons Christians to spiritual renewal.

From ancient times the Church has valued the works of Saint Ephraim. His works were read publicly in certain churches after the Holy Scripture, as Saint Jerome tells us. At present, the Church Typikon prescribes certain of his instructions to be read on the days of Lent. Among the prophets, Saint David is the preeminent psalmodist; among the Fathers of the Church, Saint Ephraim the Syrian is the preeminent man of prayer. His spiritual experience made him a guide for monastics and a help to the pastors of Edessa. Saint Ephraim wrote in Syriac, but his works were very early translated into Greek and Armenian. Translations into Latin and Slavonic were made from the Greek text.

In many of Saint Ephraim’s works we catch glimpses of the life of the Syrian ascetics, which was centered on prayer and working in various obediences for the common good of the brethren. The outlook of all the Syrian ascetics was the same. The monks believed that the goal of their efforts was communion with God and the acquisition of divine grace. For them, the present life was a time of tears, fasting and toil.

Constant spiritual sobriety, the developing of good within man’s soul gives him the possibility to take upon himself a task like blessedness, and a self-constraint like sanctity. The requital is presupposed in the earthly life of man, it is an undertaking of spiritual perfection by degrees. Whoever grows himself wings upon the earth, says Saint Ephraim, is one who soars up into the heights; whoever purifies his mind here below, there glimpses the Glory of God. In whatever measure each one loves God, he is, by God’s love, satiated to fullness according to that measure. Man, cleansing himself and attaining the grace of the Holy Spirit while still here on earth, has a foretaste of the Kingdom of Heaven. To attain to life eternal, in the teachings of Saint Ephraim, does not mean to pass over from one realm of being into another, but rather to discover “the heavenly,” spiritual condition of being. Eternal life is not bestown on man through God’s one-sided efforts, but rather, it constantly grows like a seed within him by his efforts, toils and struggles.

The pledge within us of “theosis” (or “deification”) is the Baptism of Christ, and the main force that drives the Christian life is repentance. Saint Ephraim was a great teacher of repentance. The forgiveness of sins in the Mystery of Repentance, according to his teaching, is not an external exoneration, not a forgetting of the sins, but rather their complete undoing, their annihilation. The tears of repentance wash away and burn away the sin. Moreover, they (i.e. the tears) enliven, they transfigure sinful nature, they give the strength “to walk in the way of the the Lord’s commandments,” encouraging hope in God. In the fiery font of repentance, the saint wrote, “you sail yourself across, O sinner, you resurrect yourself from the dead.”

Saint Ephraim, accounting himself as the least and worst of all, went to Egypt at the end of his life to see the efforts of the great ascetics. He was accepted there as a welcome guest and received great solace from conversing with them. On his return journey he visited at Caesarea in Cappadocia with Saint Basil the Great (January 1), who wanted to ordain him a priest, but he considered himself unworthy of the priesthood. At the insistence of Saint Basil, he consented only to be ordained as a deacon, in which rank he remained until his death. Later on, Saint Basil invited Saint Ephraim to accept a bishop’s throne, but the saint feigned madness in order to avoid this honor, humbly regarding himself as unworthy of it.

After his return to his own Edessa wilderness, Saint Ephraim hoped to spend the rest of his life in solitude, but divine Providence again summoned him to serve his neighbor. The inhabitants of Edessa were suffering from a devastating famine. By the influence of his word, the saint persuaded the wealthy to render aid to those in need. From the offerings of believers he built a poor-house for the poor and sick. Saint Ephraim then withdrew to a cave near Edessa, where he remained to the end of his days.

With the rivers of your tears, you have made the barren desert fertile. Through sighs of sorrow from deep within you, your labors have borne fruit a hundred-fold. By your miracles you have become a light, shining upon the world. O Ephraim, our Holy Father, pray to Christ our God, to save our souls.

At all times didst thou foresee the hour of reckoning, and pricked in thy heart, thou ever didst lament with tears; and, O righteous Ephraim, thou wast a mighty teacher in works and deeds. Hence, O Father for all the world, thou didst rouse the slothful unto change of heart.