Our Holy Father Theodosius of the Kiev Caves 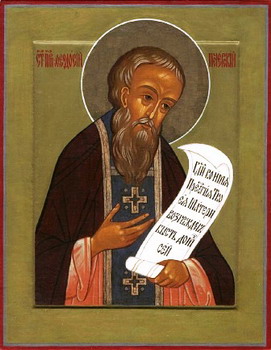 Saint Theodosius of the Caves, was the Father of monasticism in Russia. He was born at Vasilevo, not far from Kiev. From his youth he felt an irresistible attraction for the ascetic life, and led an ascetic lifestyle while still in his parental home. He disdained childish games and attractions, and constantly went to church. He asked his parents to let him study the holy books, and through his ability and rare zeal, he quickly learned to read the books, so that everyone was amazed at his intellect.

When he was fourteen, he lost his father and remained under the supervision of his mother, a strict and domineering woman who loved her son very much. Many times she chastised her son for his yearning for asceticism, but he remained firmly committed to his path.

At the age of twenty-four, he secretly left his parents' home and St Anthony at the Kiev Caves monastery blessed him to receive monastic tonsure with the name Theodosius. After four years his mother found him and with tearfully begged him to return home, but the saint persuaded her to remain in Kiev and to become a nun in the monastery of St Nicholas at the Askold cemetery.

St Theodosius toiled at the monastery more than others, and he often took upon himself some of the work of the other brethren. He carried water, chopped wood, ground up the grain, and carried the flour to each monk. On cold nights he uncovered his body and let it serve as food for gnats and mosquitoes. His blood flowed, but the saint occupied himself with handicrafts, and sang Psalms. He came to church before anyone else and, standing in one place, he did not leave it until the end of services. He also listened to the readings with particular attention.

In 1054 St Theodosius was ordained a hieromonk, and in 1057 he was chosen igumen. The fame of his deeds attracted a number of monks to the monastery, at which he built a new church and cells, and he introduced cenobitic rule of the Studion monastery, a copy of which he commissioned at Constantinople.

As igumen, St Theodosius continued his arduous duties at the monastery. He usually ate only dry bread and cooked greens without oil, and spent his nights in prayer without sleep. The brethren often noticed this, although the saint tried to conceal his efforts from others.

No one saw when St Theodosius dozed lightly, and usually he rested while sitting. During Great Lent the saint withdrew into a cave near the monastery, where he struggled unseen by anyone. His attire was a coarse hairshirt worn next to his body. He looked so much like a beggar that it was impossible to recognize in this old man the renowned igumen, deeply respected by all who knew him.

Once, St Theodosius was returning from visiting the Great Prince Izyaslav. The coachman, not recognizing him, said gruffly, "You, monk, are always on holiday, but I am constantly at work. Take my place, and let me ride in the carriage." The holy Elder meekly complied and drove the servant. Seeing how nobles along the way bowed to the monk driving the horses, the servant took fright, but the holy ascetic calmed him, and gave him a meal at the monastery. Trusting in God's help, the saint did not keep a large supply of food at the monastery, and therefore the brethren were in want of their daily bread. Through his prayers, however, unknown benefactors appeared at the monastery and furnished the necessities for the brethren.

The Great Princes, especially Izyaslav, loved to listen to the spiritual discourses of St Theodosius. The saint was not afraid to denounce the mighty of this world. Those unjustly condemned always found a defender in him, and judges would review matters at the request of the igumen. He was particularly concerned for the destitute. He built a special courtyard for them at the monastery where anyone in need could receive food and drink. Sensing the approach of death, St Theodosius peacefully fell asleep in the Lord in the year 1074. He was buried in a cave which he dug, where he secluded himself during fasting periods.

The relics of the ascetic were found incorrupt in the year 109, and he was glorified as a saint in 1108. Of the written works of St Theodosius six discourses, two letters to Great Prince Izyaslav, and a prayer for all Christians have survived to our time.

The Life of St Theodosius was written by St Nestor the Chronicler (October 27), a disciple of the great Abba, only thirty years after his repose, and it was always one of the favorite readings of the Russian nation. St Theodosius is also commemorated on September 2 and 28.

Having been raised on virtue, you loved the monastic life from your youth,
and having valiantly attained your desire, you lived in a cave;
you adorned your life with the radiance of fasting, persevering in prayer as though bodiless.
Like a bright lamp you illumined the Russian lands, Father Theodosius.
Entreat Christ God that our souls may be saved.

"Today the Virgin..."
Today let us honor a star of Russia,
who shone forth from the East, and came to the West.
The entire world has been enriched by wonders and blessings,
and all of us by grace
and by the establishment of the monastic rule by Blessed Theodosius.