The Holy Martyrs Boris and Gleb 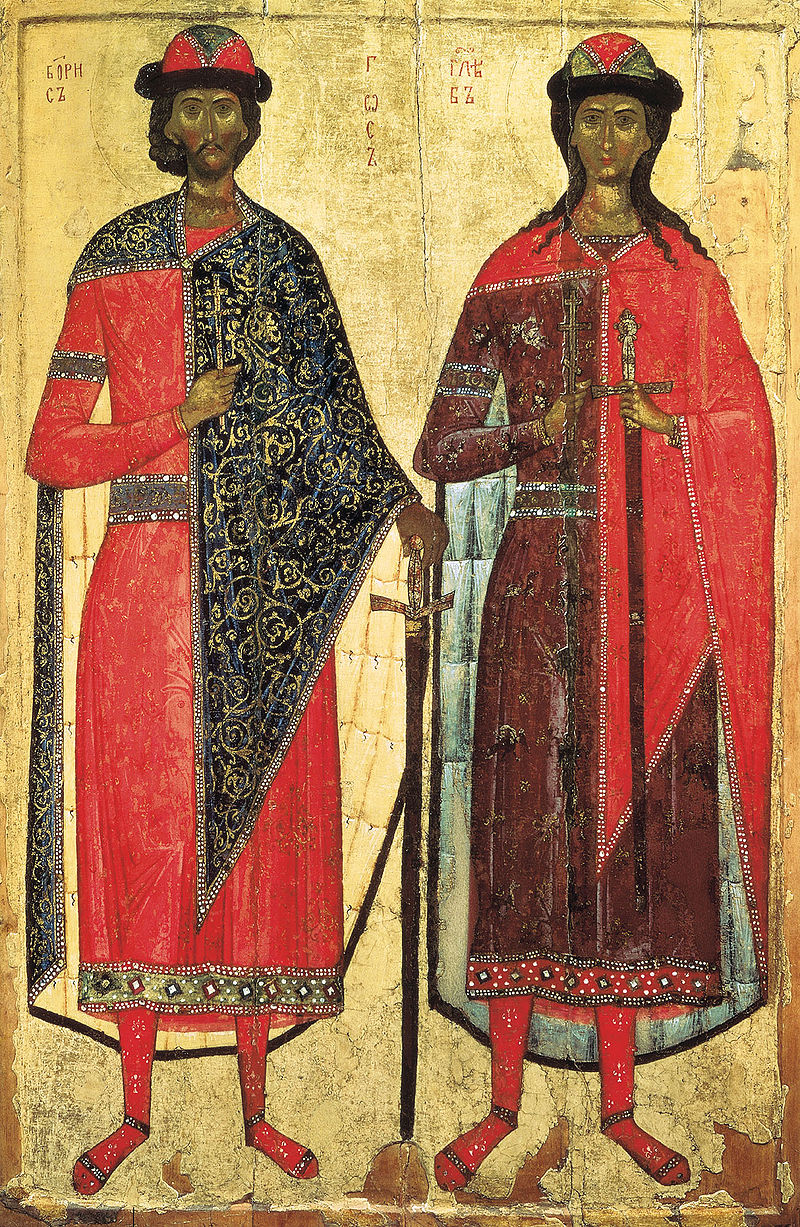 The Transfer of the Relics of the Holy Passion-Bearers Boris and Gleb. St Boris (July 24) was a brother of the Great Prince of Kiev Yaroslav the Wise (1019-1054), and was baptized with the name Roman. The murdered Prince Boris was buried at the church of St Basil the Great at Vyshgorod near Kiev.

Metropolitan John I of Kiev (1008-1035) and his clergy solemnly met the incorrupt relics of the holy passion-bearer Gleb and placed them in the church where the relics of St Boris rested. Soon the burial place was glorified by miracles. Then the relics of the holy brothers Boris and Gleb were removed from the ground and placed in a specially constructed chapel. On July 24, 1026 a church of five cupolas built by Yaroslav the Wise was consecrated in honor of the holy martyrs.

In later years, the Vyshgorod Sts Boris and Gleb church containing the relics of the holy Passion-Bearers became the family church of the Yaroslavichi, their sanctuary of brotherly love and service to the nation. The symbol of their unity was the celebration of the Transfer of the Relics of Boris and Gleb, observed on May 2. The history of the establishing of this Feast is bound up with the preceding events of Russian history. On May 2, 1069 the Great Prince Izyaslav, who had been expelled from the princedom for seven months (i.e. from September 1068) because of an uprising of the Kievan people, entered into Kiev. In gratitude for God's help in establishing peace in the Russian land, the prince built a new church to replace an older structure. Two Metropolitans, George of Kiev and Neophytus of Chernigov, participated in its consecration with other bishops, igumens, and clergy. The transfer of the relics, in which all three of the Yaroslavichi (Izyaslav, Svyatoslav, Vsevolod) participated, was set for May 2, and it was designated as an annual celebration.

Svyatoslav Yaroslavich, Prince of Kiev during 1073-1076, made an effort to transform the Sts Boris and Gleb temple into a stone church, but he was able to build the walls only eight cubits high. Later Vsevolod (+ 1093) finished the church construction, but it collapsed by night.

The veneration of Sts Boris and Gleb developed during the time of Yaroslav's grandsons, often producing a peculiar pious competition among them. Izyaslav's son Svyatopolk (+ 1113), built silver reliquaries for the saints. In 1102 Vsevolod's son Vladimir Monomakh (+ 1125), sent master craftsmen by night and secretly adorned the silver reliquaries with gold leaf. Svyatoslav's son Oleg (+ 1115) outdid them. He was called "Gorislavich", and was mentioned in the "Tale of Igor's Campaign." He "intended to raise up the collapsed stone (church) and hired some builders." He provided everything that was necessary.
< The church was ready in the year 1111, and Oleg "pressured and besought Svyatopolk to transfer the holy relics into it." Svyatopolk did not want to do this, "because he did not build this church."

The death of Svyatopolk Izyaslavich (+ 1113) brought a new insurrection to Kiev, which nearly killed Vladimir Monomakh, who had become Great Prince of that city. He decided to cultivate friendship with the Svyatoslavichi through the solemn transfer of the relics into the Oleg church. "Vladimir gathered his sons, and David and Oleg with their sons. They all arrived at Vyshgorod. All the hierarchs, igumens, monks and priests came, filling all the town and there was no space left for the citizenry along the walls."

On the morning of May 2, 1115, the Sunday of the Myrhhbearing Women, they began to sing Matins at both churches, old and new, and the transfer of relics began. The three were separated. "First they brought St Boris in a cart, and with him went Metropolitan Vladimir and his clergy." On other carts went St Gleb "and David with bishops and clergy." (Oleg waited for them in the church).

This separation was adhered to in future generations. St Boris was considered a heavenly protector of the Monomashichi; St Gleb, of the Ol'govichi and the Davidovichi. When Vladimir Monomakh speaks about Boris in his "Testament", he does not mention Gleb. In the Ol'govichi line, none of the princes received the name Boris.

The Vyshgorod sanctuaries were not the only centers for the liturgical veneration of Sts Boris and Gleb. It was spread throughout the Russian land. First of all, there were churches and monasteries in specific places connected with the martyrdom of the saints, and their miraculous help for people; the temple of Boris and Gleb at Dorogozhich on the road to Vyshgorod, where St Boris died; the Sts Boris and Gleb monastery at Tmo near Tver where Gleb's horse injured its leg; a monastery of the same name at Smyadyno at the place of Gleb's murder; and at the River Tvertsa near Torzhok (founded in 1030), where the head of St George the Hungarian was preserved [trans. note: the beloved servant of St Boris was beheaded in order to steal the gold medallion given him by St Boris]. Churches dedicated to Sts Boris and Gleb were built at the Alta in memory of the victory of Yaroslav the Wise over Svyatopolk the Accursed on July 24, 1019; and also at Gzena near Novgorod where Gleb Svyatoslavich defeated a sorcerer.

The Ol'govichi and the Monomashichi vied with each other in building churches dedicated to the holy martyrs. Oleg himself, in addition to the Vyshgorod church, built the Sts Boris and Gleb cathedral in Old Ryazan in 1115 (therefore, the diocese was later called Sts Boris and Gleb). His brother David also built at Chernigov (in 1120). In the year 1132 Yuri Dolgoruky built a church of Boris and Gleb at Kideksh at the River Nerla, "where the encampment of St Boris had been." In 1145, St Rostislav of Smolensk "put a stone church at Smyadyno," at Smolensk. In the following year the first (wooden) Sts Boris and Gleb church was built in Novgorod. In 1167 a stone foundation replaced the wood, and it was completed and consecrated in the year 1173. The Novgorod Chronicles name the legendary Sotko Sytinich as the builder of the church.

The holy Passion-Bearers Boris and Gleb were the first Russian saints glorified by the Russian and Byzantine Churches. A service to them was composed soon after their death, and its author was St John I, Metropolitan of Kiev (1008-1035), which a MENAION of the twelfth century corroborates. The innumerable copies of their Life, the accounts of the relics, the miracles and eulogies in the manuscripts and printed books of the twelfth-fourteenth centuries bear witness to the special veneration of the holy Martyrs Boris and Gleb in Russia.

[trans. note: Neither this account nor those of the individual feastdays give the details of their martyrdom. Perhaps it is assumed that the reader is familiar with the story, or perhaps it is too painful to recount. The saints chose not to take up arms to defend themselves, or flee to safety. In their final prayers, they refer to the Lord's voluntary suffering and death, as recorded by the chroniclers. Since they meekly accepted an unjust death for the sake of Christ, they are known as "Passion-Bearers."] 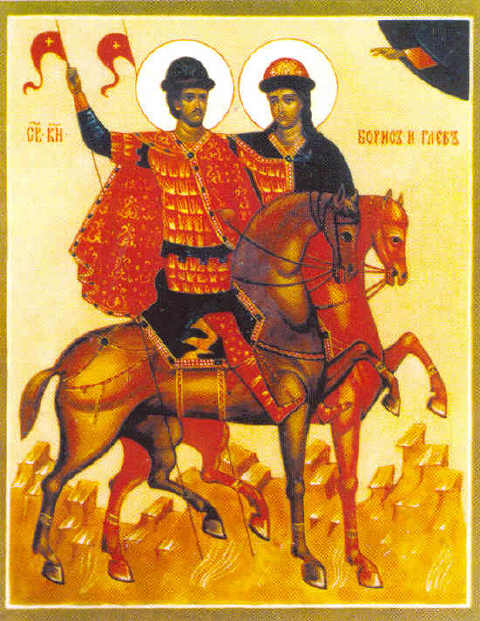 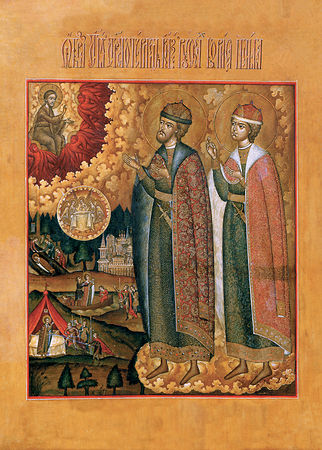