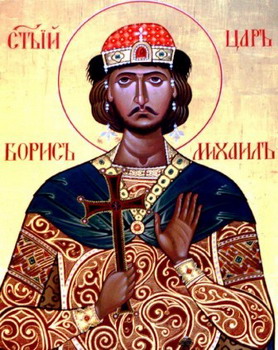 The Holy Equal of the Apostles Tsar Boris, in Holy Baptism Michael: His apostolic deeds were foretold by an uncle, St Boyan. The first years of the reign of Tsar Boris were marked by misfortune. The Bulgarians were frequently at war with surrounding nations, famine and plague beset the land, and in the year 860 Bulgaria found itself in dire straits. Tsar Boris saw the salvation of his land, which was darkened by paganism, in its enlightenment by the faith in Christ.

During one of the battles of the Bulgarians with the Greeks he captured the illustrious courtier Theodore Kuphares, who had become a monk. He was the first man to plant the seed of the Gospel in the soul of the Bulgarian tsar. In one of the campaigns with the Greeks the young sister of Tsar Boris was taken captive, and was raised in the Orthodox Faith at the court of the Byzantine Emperor.

When the emperor Theophilus died, Tsar Boris decided to take advantage of this circumstance to take revenge upon the Greeks for his former defeats. But the widow of the emperor, Theodora, showed courage and sent a messenger to the Bulgarian tsar saying that she was prepared to defend the Empire and humiliate its opponents. Tsar Boris agreed to a peace alliance, and Theodore Kuphares was exchanged for the Bulgarian princess, who influenced her brother toward Christianity. A while later St Methodius was sent into Bulgaria. He and his brother St Cyril were enlightening the Slavic peoples with the light of Christ. St Methodius baptized Tsar Boris, his family and many of the nobles.

When the pagan Bulgarians learned of this, they wanted to kill Tsar Boris, but their plot was frustrated by the tsar. Deprived of their rebellious leaders, the Bulgarian people voluntarily accepted Baptism. A peace was concluded between Byzantium and Bulgaria, based on their unity in faith, which was not broken until the end of the reign of the noble tsar. The Patriarch Photius (February 6) took great interest in the spiritual growth of the Bulgarian nation. In 867, preachers from Rome were sent into Bulgaria. This led to three years of discord between the Greek and Roman Churches in Bulgaria.

A Council at Constantinople in 869 put an end to the quarrel, and on March 3, 870 Bulgaria was joined to the Eastern Church, and Orthodoxy was firmly established there. Bulgaria's holy ascetics: Sts Gorazd (July 27) and Clement of Ochrid (July 27) were glorified as saints. Tsar Boris adorned the land with churches and furthered the spread of piety. Later, a Patriarchal See was established in Bulgaria. In his declining years, Tsar Boris entered a monastery, leaving the throne to his sons Vladimir and Simeon.

While in the monastery the saint learned that Vladimir, who succeeded him, had renounced Christianity. Distressed by this, St Boris again donned his military garb, punished his disobedient son and threw him in prison. After giving the throne to his younger son Simeon, St Boris returned to the monastery. He left it once more to repel a Hungarian invasion. St Boris, who was named Michael in holy Baptism, reposed on May 2, 907. 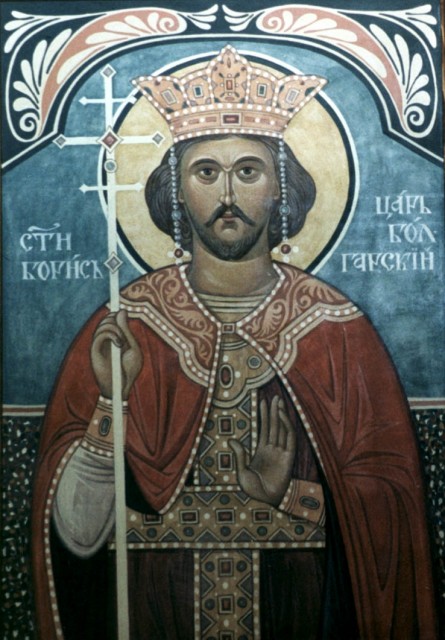