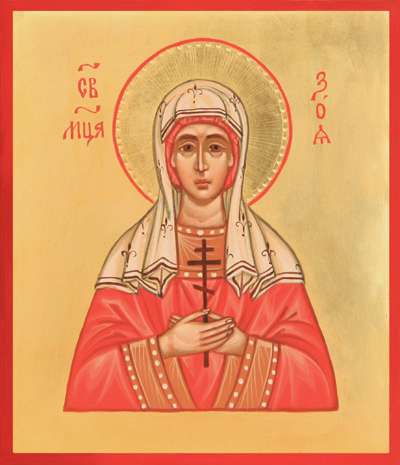 The Holy Martyrs Hesperus, his Wife Zoe, and their Children Cyriacus and Theodulus suffered for their faith in Christ in the second century, during the persecution under Hadrian (117-138). They had been Christians since their childhood, and they also raised their children in piety. They were all slaves of an illustrious Roman named Catullus, living in Attalia, Asia Minor. While serving their earthly master, the saints never defiled themselves with food offered to idols, which pagans were obliged to use.

Once, Catullus sent Hesperus on business to Tritonia. Sts Cyriacus and Theodulus decided to run away, unable to endure constant contact with pagans. St Zoe, however, did not bless her sons to do this. Then they asked their mother's blessing to confess their faith in Christ openly, and they received it.

When the brothers explained to Catullus that they were Christian, he was surprised, but he did not deliver them for torture. Instead, he sent them with their mother to St Hesperus at Tritonia, hoping that the parents would persuade their children to deny Christ. At Tritonia, the saints lived in tranquility for a while, preparing for martyrdom.

All the slaves returned to Attalia for the birthday of Catullus' son, and a feast was prepared at the house in honor of the pagan goddess Fortuna. Food was sent to the slaves from the master's table, and this included meat and wine that had been sacrificed to idols. The saints would not eat the food. Zoe poured the wine upon the ground and threw the meat to the dogs. When he learned of this, Catullus gave orders to torture Zoe's sons, Sts Cyriacus and Theodulus.

The brothers were stripped, suspended from a tree, and raked with iron implements before the eyes of their parents, who counselled their children to persevere to the end.

Then the parents, Sts Hesperus and Zoe, were subjected to terrible tortures. Finally, they threw all four martyrs into a red-hot furnace, where they surrendered their souls to the Lord. Their bodies were preserved in the fire unharmed, and angelic singing was heard, glorifying the confessors of the Lord.