The Holy Female Martyr Felicitas And Her Seven Sons 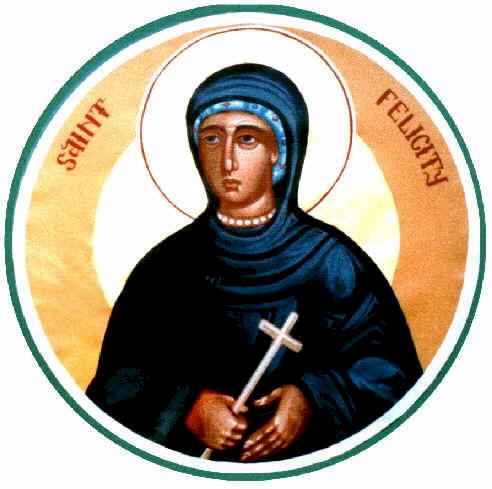 The Holy Martyr Felicitas with her Seven Sons, Januarius, Felix, Philip, Silvanus, Alexander, Vitalius and Marcial. St Felicitas was born of a rich Roman family. She boldly confessed before the emperor and civil authorities that she was a Christian. The pagan priests said that she was insulting the gods by spreading Christianity. St Felicitas and her sons were turned over to the Prefect Publius for torture.

St Felicitas witnessed the suffering of her sons, and prayed to God that they would stand firm and enter the heavenly Kingdom before her. All the sons died as martyrs before the eyes of their mother, who was being tortured herself.

St Felicitas soon followed her sons in martyrdom for Christ. They suffered at Rome about the year 164. St Gregory Dialogus mentions her in his Commentary on the Gospel of St Matthew (Mt.12:47).

Your holy martyr Felicitas, O Lord,
Through her sufferings has received an incorruptible crown from You, our God.
For having Your strength, she laid low her adversaries,
And shattered the powerless boldness of demons.
Through her intercessions, save our souls!