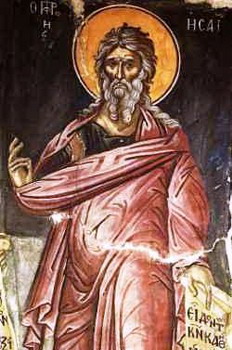 The Holy Prophet Isaiah lived 700 years before the birth of Christ, and was of royal lineage. Isaiah's father Amos raised his son in the fear of God and in the law of the Lord. Having attained the age of maturity, the Prophet Isaiah entered into marriage with a pious prophetess (Is 8:3) and had a son Jashub (Is 8:18).

St Isaiah was called to prophetic service during the reign of Oziah [Uzziah], king of Judea, and he prophesied for 60 years during the reign of kings Joatham, Achaz [Ahaz], Hezekiah and Manasseh. The start of his service was marked by the following vision: he beheld the Lord God, sitting in a majestic heavenly temple upon a high throne. Six-winged Seraphim encircled Him. With two wings they covered their faces, and with two wings they covered their feet, and with two wings they flew about crying out one to another, "Holy, Holy, Holy Lord Sabaoth, heaven and earth are filled with His glory!" The pillars of the heavenly temple shook from their shouts, and in the temple arose the smoke of incense.

The prophet cried out in terror, "Oh, an accursed man am I, granted to behold the Lord Sabaoth, and having impure lips and living amidst an impure people!" Then was sent him one of the Seraphim, having in hand a red-hot coal, which he took with tongs from the altar of the Lord. He touched it to the mouth of the Prophet Isaiah and said, "Lo, this has touched thy lips, and will take away with thine iniquities, and will cleanse thy sins." After this Isaiah heard the voice of the Lord, directed towards him, "Whom shall I send, and who will go to this people?" Isaiah answered, "Here am I, send me" (Is 6:1 ff). And the Lord sent him to the Jews to exhort them to turn from the ways of impiety and idol worship, and to offer repentance.

To those that repent and turn to the true God, the Lord promised mercy and forgiveness, but punishment and the judgment of God are appointed for the unrepentant. Then Isaiah asked the Lord, how long would the falling away of the Jewish nation from God continue. The Lord answered, "Until the cities be deserted, by reason of there being no people, and the land shall be made desolate. Just as when a tree be felled and from the stump come forth new shoots, so also from the destruction of the nation a holy remnant will remain, from which will emerge a new tribe."

Isaiah left behind him a book of prophecy in which he denounces the Jews for their unfaithfulness to the God of their Fathers. He predicted the captivity of the Jews and their return from captivity during the time of the emperor Cyrus, the destruction and renewal of Jerusalem and of the Temple. Together with this he predicts the historical fate also of the other nations bordering the Jews. But what is most important of all for us, the Prophet Isaiah with particular clarity and detail prophesies about the coming of the Messiah, Christ the Savior. The prophet names the Messiah as God and Man, teacher of all the nations, founder of the Kingdom of peace and love.

The prophet foretells the birth of the Messiah from a Virgin, and with particular clarity he describes the Suffering of the Messiah for the sins of the world. He foresees His Resurrection and the universal spreading of His Church. By his clear foretelling of Christ the Savior, the Prophet Isaiah deserves to be called an Old Testament Evangelist. To him belong the words, "He beareth our sins and is smitten for us.... He was wounded for our sins and tortured for our transgressions. The chastisement of our world was upon Him, and by His wounds we were healed...." (Is 53:4-5. Vide Isaiah: 7:14, 11:1, 9:6, 53:4, 60:13, etc.).

The holy Prophet Isaiah had also a gift of wonderworking. And so, when during the time of a siege of Jerusalem by enemies the besieged had become exhausted with thirst, he by his prayer drew out from beneath Mount Sion a spring of water, which was called Siloam, i.e. "sent from God." It was to this spring afterwards that the Savior sent the man blind from birth to wash, and He restored his sight. By the prayer of the Prophet Isaiah, the Lord prolonged the life of Hezekiah for 15 years.

The Prophet Isaiah died a martyr's death. By order of the Jewish king Manasseh he was sawn through by a wood-saw. The prophet was buried not far from the Pool of Siloam. The relics of the holy Prophet Isaiah were afterwards transferred by the emperor Theodosius the Younger to Constantinople and installed in the church of St Laurence at Blachernae. At the present time part of the head of the Prophet Isaiah is preserved at Athos in the Hilandar monastery.

With a great voice like that of a trumpet,
you proclaimed the coming of Christ to the world.
You were revealed as a swiftly-writing scribe of the things to come;
therefore, we acclaim you with hymns,
most illustrious prophet Isaiah.

Endowed with the gift of prophecy,
prophet-martyr Isaiah, herald of God,
you made clear to all the incarnation of Christ
by proclaiming with a great voice:
"Behold, the Virgin shall conceive in her womb." 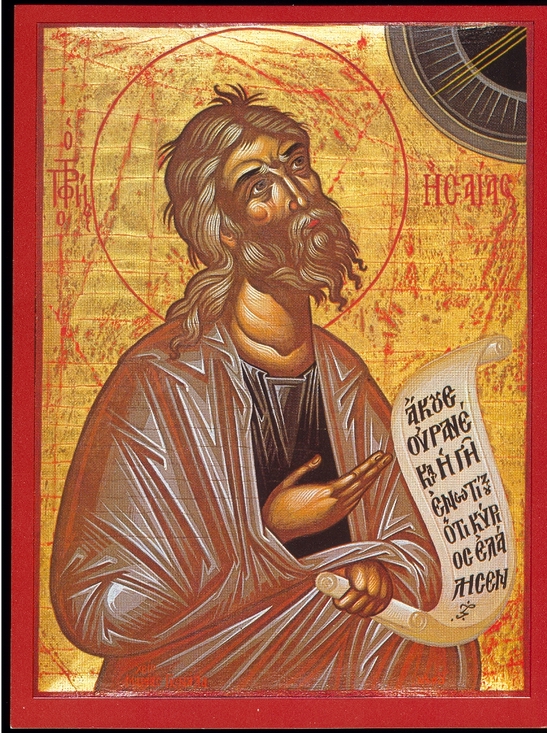 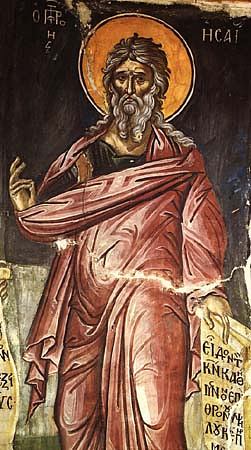 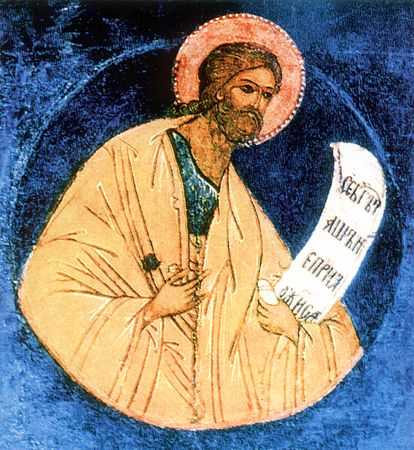 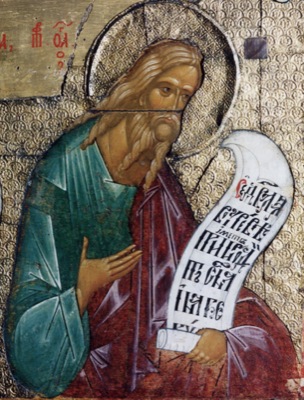 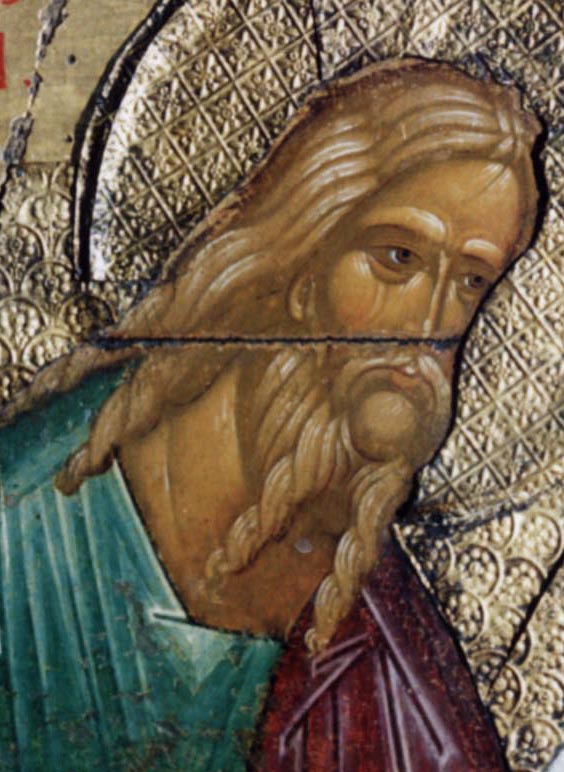