Our Holy Mother Isidora the Fool for Christ 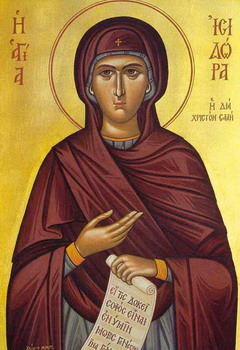 Saint Isidora, Fool-for-Christ, struggled in the Tabenna monastery in Egypt during the sixth century. Taking upon herself the feat of folly, she acted like one insane, and did not eat food with the other sisters of the monastery. Many of them regarded her with contempt, but Isidora bore all this with great patience and meekness, blessing God for everything.

She worked in the kitchen and fulfilled the dirtiest, most difficult tasks at the monastery, cleaning the monastery of every impurity. Isidora covered her head with a plain rag, and instead of cooked food she drank the dirty wash water from the pots and dishes. She never became angry, never insulted anyone with a word, never grumbled against God or the sisters, and was given to silence.

Once, a desert monk, St Pitirim, had a vision. An angel of God appeared to him and said, "Go to the Tabenna monastery. There you will see a sister wearing a rag on her head. She serves them all with love, and endures their contempt without complaint. Her heart and her thoughts rest always with God. You, on the other hand, sit in solitude, but your thoughts flit about all over the world."

The Elder set out for the Tabenna monastery, but he did not see the one indicated to him in the vision among the sisters. Then they led Isidora to him, considering her a demoniac. Isidora fell down at the knees of the Elder, asking his blessing. St Pitirim bowed down to the ground to her and said, "Bless me first, venerable Mother!"

To the astonished questions of the sisters the Elder replied, "Before God, Isidora is higher than all of us!" Then the sisters began to repent, confessing their mistreatment of Isidora, and they asked her forgiveness. The saint, however, distressed over her fame, secretly hid herself away from the monastery, and her ultimate fate remained unknown. It is believed that she died around the year 365.