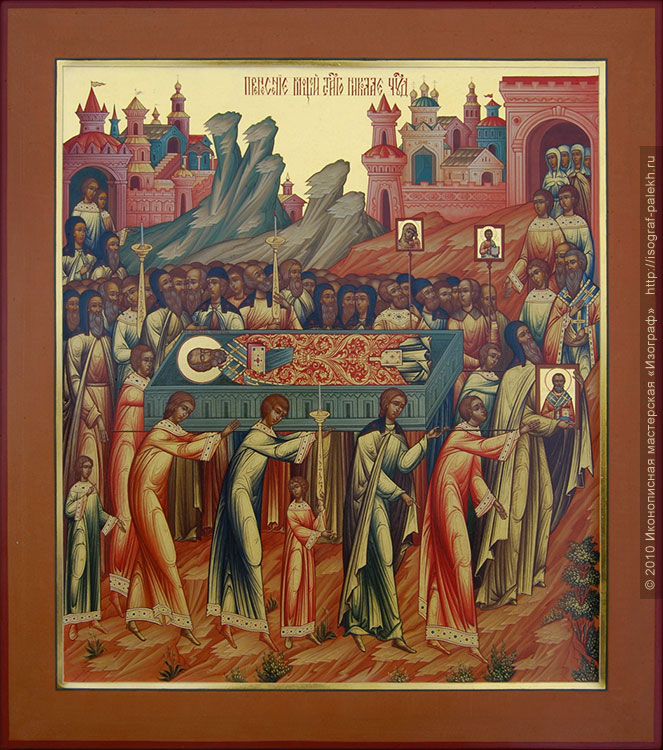 St Nicholas the Wonderworker, Archbishop of Myra in Lycia. The Transfer of the Relics from Myra of Lycia to Bari in Italy His Life is found under December 6.

In the eleventh century the Byzantine Empire was going through some terrible times. The Turks put an end to its influence in Asia Minor, they destroyed cities and villages, they murdered the inhabitants, and they accompanied their cruel outrage with the desecration of churches, holy relics, icons and books. The Mussulmen also attempted to destroy the relics of St Nicholas, deeply venerated by the whole Christian world.

In the year 792 the caliph Aaron Al'-Rashid sent Khumeid at the head of a fleet to pillage the island of Rhodes. Having lain waste this island, Khumeid set off to Myra in Lycia with the intent to rob the tomb of St Nicholas. But instead he robbed another tomb standing alongside the crypt of the saint. Just as they succeeded in committing this sacrilege, a terrible storm lifted upon the sea and almost all the ships were shattered into pieces.

In the year 1087 merchants from Bari and Venice went to Antioch to trade. Both these and others also proposed to take up the relics of St Nicholas and transport them to Italy on the return trip. In this plan the men of Bari commissioned the Venetians to land them at Myra. At first two men were sent in, who in returning reported that in the city all was quiet. In the church where the glorified relics rested, they encountered only four monks. Immediately forty-seven men, having armed themselves, set out for the church of St Nicholas. The guards, suspecting nothing, showed them the raised platform, beneath which the tomb of the saint was concealed, and where they anointed foreigners with myrrh from the relics of the saint.

At this time the monks told them about an appearance of St Nicholas that evening to a certain Elder. In this vision St Nicholas ordered the careful preservation of his relics. This account encouraged the barons, they saw an avowal for them in this vision and, as it were, a decree from the saint. In order to facilitate their activity, they revealed their intent to the monks and offered them money, 300 gold coins. The guards refused the money and wanted to warn the inhabitants about the misfortune threatening them. But the newcomers bound them and put their own guards at the doorway.

They took apart the church platform above the tomb with the relics. In this effort the youth Matthew was excessive in his zeal, wanting to find the relics of St Nicholas as quickly as possible. In his impatience he broke the cover and the barons saw that the sarcophagus was filled with fragrant holy myrrh. The compatriots of the barons, the priests Luppus and Drogus, offered a litany, after which the break made by Matthew began to flow with myrrh from the saint's sarcophagus. This occurred on April 20, 1087.

Seeing the absence of a container chest, the priest Drogus wrapped the relics in the cloth, and in the company of the barons he carried them to the ship. The monks, having been set free, alerted the city with the sad news about the abduction of the relics of the Wonderworker Nicholas by foreigners. A crowd of people gathered at the shore, but it was too late.

On May 8 the ships arrived in Bari, and soon the joyous news made the rounds of all the city. On the following day, May 9, 1087, they solemnly transported the relics of St Nicholas into the church of St Stephen, not far from the sea. The solemn bearing of the relics was accompanied by numerous healings of the sick, which inspired still greater reverence for God's saint. A year afterwards, a church was built in the name of St Nicholas and consecrated by Pope Urban II.

The Russian Orthodox Church celebration of the memory of the Transfer of the Relics of St Nicholas from Myra in Lycia to Bari in Italy on May 9 was established soon after the year 1087, on the basis of an already established veneration by the Russian people of the great saint of God, brought from Greece simultaneously with the acceptance of Christianity. The glorious accounts ot the miracles performed by the saint on both land and sea, were widely known to the Russian people. Their inexhaustible strength and abundance testify to the help of the great saint of God for suffering mankind. The image of St Nicholas, a mighty wonderworker and benefactor, became especially dear to the heart of the Russian people, since it inspired deep faith and hope for his intercession. The faith of the Russian people in the abundant aid of God's saint was marked by numerous miracles.

A significant body of literature was compiled about him very early in Russian writings. Accounts of the miracles of St Nicholas done in the Russian land were recorded at an early date. Soon after the Transfer of the Relics of St Nicholas from Myra to Bari, a Russian version of his Life and an account of the Transfer of his holy relics were written by a contemporary to this event. Earlier still, an encomium to the Wonderworker was written. Each week on Thursday, the Russian Orthodox Church honors his memory in particular.

Numerous churches and monasteries were built in honor of St Nicholas, and Russian people are wont to name their children after him at Baptism. In Russia are preserved numerous wonderworking icons of the saint. Most renowned among them are the icons of Mozhaisk, Zaraisk, Volokolamsk, Ugreshsk and Ratny. There was no house or temple in the Russian land in which there was not an icon of St Nicholas the Wonderworker.

The significance of the intercession of the great saint of God is expressed by the ancient compiler of the Life, in the words of whom St Nicholas "did work many glorious miracles both on land and on sea, aiding those downtrodden in misfortune and rescuing the drowning, carried to dry land from the depths of the sea, raising up others from corruption and bringing them home, liberating from chains and imprisonment, averting felling by the sword and freeing from death, and granting healing to many; sight to the blind, walking to the lame, hearing to the deaf, and speech to the mute. He brought riches to many suffering in abject poverty and want, he provided the hungry food, and for each in their need he appeared a ready helper, an avid defender and speedy intercessor and protector, and such as appeal to him he doth help and deliver from adversity. Both the East and the West know of this great Wonderworker, and all the ends of the earth know his miracle-working." 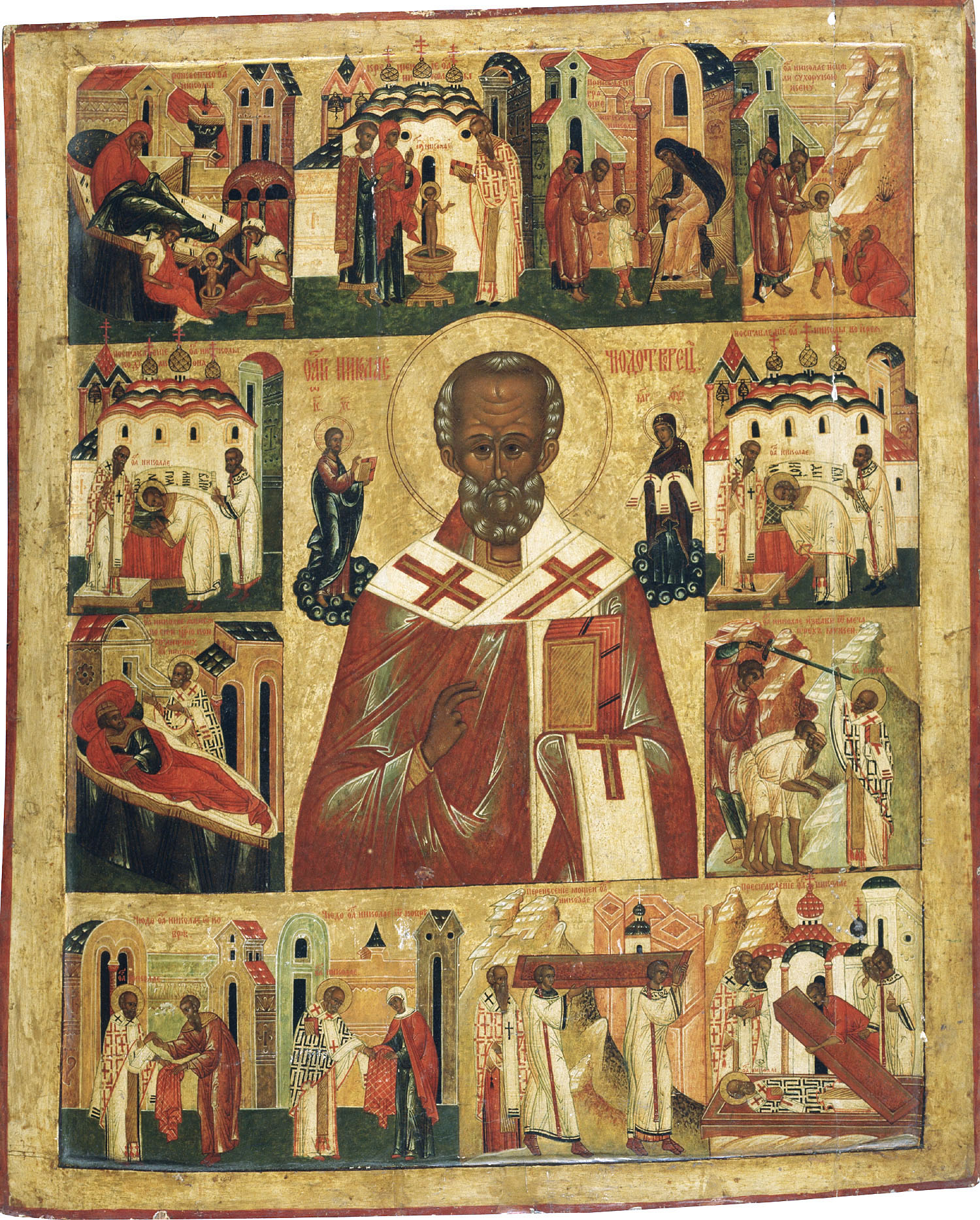 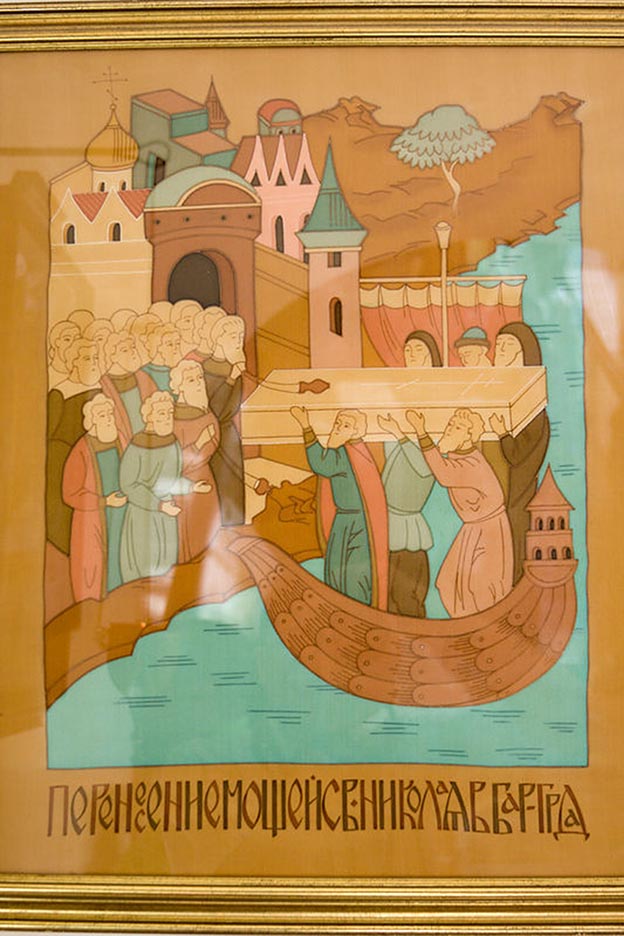