Venerable Simeon The Old One [Vetni] 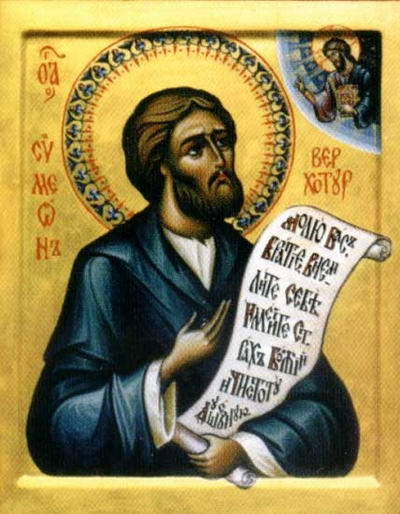 Saint Simeon the Elder was so named in order to distinguish him from St Simeon the Stylite (September 1). He practiced asceticism in Syria in the fifth century, and in his childhood years went out into the Syrian wilderness and lived in a cave in complete solitude.

Unceasing prayer, meditation, and contemplation of God were his constant occupation. The ascetic ate only the grass which grew about his cave. When people began to come to him to receive guidance, he wished to preserve his silence, so he left his cave and settled on one of the mountains of the Aman range. But here also his solitude was disturbed by many visitors. St Simeon withdrew to Mount Sinai, where formerly the Prophet Moses (September 4) received a revelation from God.

By divine Providence, the holy ascetic returned to Aman after a short stay on Sinai and founded two monasteries: one at the top of the mountain, the other at its base. As head of these monasteries, St Simeon guided the monks, warning them about the wiles of the Enemy of mankind, and he taught them how to struggle against temptations. He inspired and encouraged them in ascetic deeds, rousing them to think of their salvation. Because of the holiness of his life St Simeon received from God the gift of wonderworking.

After the many labors of his ascetic life, St Simeon departed to God around the year 390.