Commemoration of the Appearing of the Precious Cross over Jerusalem 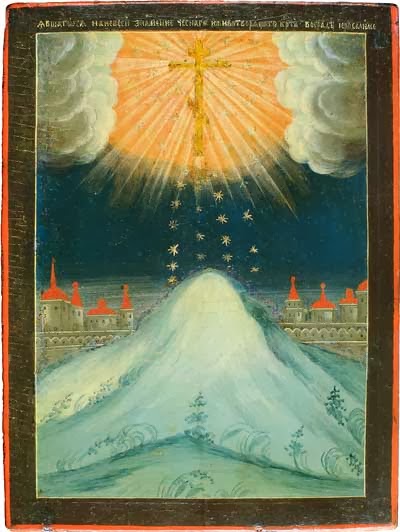 The Precious Cross appeared in the sky over Jerusalem on the morning of May 7, 351 during the reign of the emperor Constantius, the son of St Constantine (May 21).

At that time the heresy of Arianism, which taught that Christ was merely a creature and not God, was causing great turmoil and division throughout the Empire. Even after the First Ecumenical Council at Nicea in 325, many people were drawn to this false teaching, and the Orthodox found themselves in the minority in many places.

Constantius, the ruler of the eastern part of the Empire, was a fervent supporter of Arianism. His brothers Constantine II and Constans, who were pious Orthodox Christians, ruled in the west. They were both killed in separate battles around 350, leaving Constantius as sole ruler. Also in 350, St Cyril (March 18) became Patriarch of Jerusalem and began his zealous struggle against Arianism.

In May of 351 a luminous Cross appeared over Jerusalem, stretching from Golgotha to the Mount of Olives, a distance of about five and a half miles. The Cross was wide as it was long, and shone more brightly than the sun. Many people left their homes and workplaces to gather in the church and glorify Christ. The historian Sozomen says that this wondrous sign led to the conversion of multitudes of pagans and Jews to Christianity.

A letter from St Cyril to the emperor describing this phenomenon, and admonishing him to become Orthodox, has been preserved. The apparition of the Cross remained over the city for a whole week.

The vision of the Cross over Jerusalem strengthened the Orthodox faithful and contributed to the return of many Arians to the Church. It is also a reminder of the awesome Second Coming of Christ, when "the sign of the Son of man shall appear in heaven (Matthew 24:30).

The image of Your cross has shown more brightly than the sun,
Extending from the holy mountain to the place of the skull.
In it, You have shown Your strength, O Savior,
And confirmed all Orthodox Christians in the True Faith.
Through the prayers of the Theotokos,
Save us, O Christ our God.

The pure and Life-giving Cross which opened paradise
Appeared in splendor above the earth,
Extending it's brilliant rays to the heavens.
Today we faithful accept its radiance as our guide to the eternal light.
We bear it in our struggles as an assurance of victory and triumph! 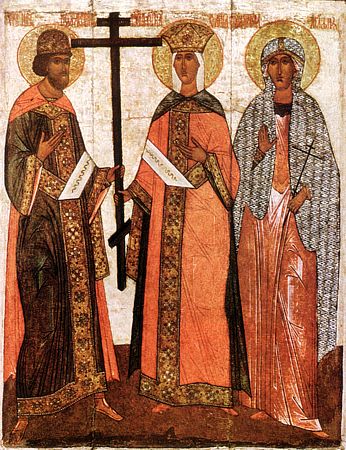