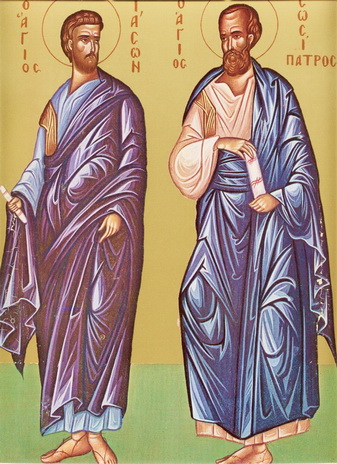 The Apostle Sosipater was a native of Patra, Achaia. He is thought to be the same Sosipater mentioned in Acts 20:4. They both became disciples of St Paul, who even called them his kinsmen (Rom 16:21). St John Chrysostom (Homily 32 on Romans) says that this is the same Jason who is mentioned in Acts 17:5-9. St Jason was made bishop in his native city of Tarsus, and St Sosipater in Iconium. They traveled west preaching the Gospel, and in 63 they reached the island of Kerkyra [Korfu] in the Ionian Sea near Greece.

There they built a church in the name of the Protomartyr Stephen and they baptized many. The governor of the island learned on this and locked them up in prison, where they met seven thieves: Saturninus, Iakischolus, Faustianus, Januarius, Marsalius, Euphrasius and Mammius. The Apostles converted them to Christ. For their confession of Christ, the seven prisoners died as martyrs in a cauldron of molten tar, wax and sulfur.

The prison guard, after witnessing their martyrdom, declared himself a Christian. For this they cut off his left hand, then both feet and finally his head. The governor ordered the Apostles Jason and Sosipater to be whipped and again locked up in prison.

When the daughter of the governor of Kerkyra (Korfu), the maiden Kerkyra, learned how Christians were suffering for Christ, she declared herself a Christian and gave away all her finery to the poor. The infuriated governor attempted to persuade his daughter to deny Christ, but St Kerkyra stood firm against both persuasion and threats. Then the enraged father devised a terrible punishment for his daughter: he gave orders that she be placed in a prison cell with the robber and murderer Murinus, so that he might defile the betrothed of Christ

But when the robber approached the door of the prison cell, a bear attacked him. St Kerkyra heard the noise and she drove off the beast in the name of Christ. Then, by her prayers, she healed the wounds of Murinus. Then St Kerkyra enlightened him with the faith of Christ, and St Murinus declared himself a Christian and was executed.

The governor gave orders to burn down the prison, but the holy virgin remained alive. Then on her enraged father's order, she was suspended upon a tree, choked with bitter smoke and shot with arrows. After her death, the governor decided to execute all the Christians on the island of Kerkyra. The Martyrs Zeno, Eusebius, Neon and Vitalis, after being enlightened by Sts Jason and Sosipater, were burned alive.

The inhabitants of Kerkyra, escaping from the persecution, crossed to an adjoining island. The governor set sail with a detachment of soldiers, but was swallowed up by the waves. The governor succeeding him gave orders to throw the Apostles Jason and Sosipater into a cauldron of boiling tar. When he beheld them unharmed, he cried out with tears, "O God of Jason and Sosipater, have mercy on me!"

Having been set free, the Apostles baptized the governor and gave him the name Sebastian. With his help, the Apostles Jason and Sosipater built several churches on the island, and increased the flock of Christ by their fervent preaching. They lived there until they reached old age.

We honor the like-minded pair of Christ’s apostles,
divinely-inspired Jason and noble Sosipater;
for they received the word of grace
and enlightened Corfu with the light of godliness.
Now they intercede with Christ our God that our souls may be saved.

Illumined by Paul’s teaching,
you enlightened the whole world, thrice-blessed apostles.
You shine on it with miracles, Jason, source of healings,
and Sosipater, glory of martyrs.
Holy protectors of those in need,
pray that our souls may be saved, God-bearing apostles. 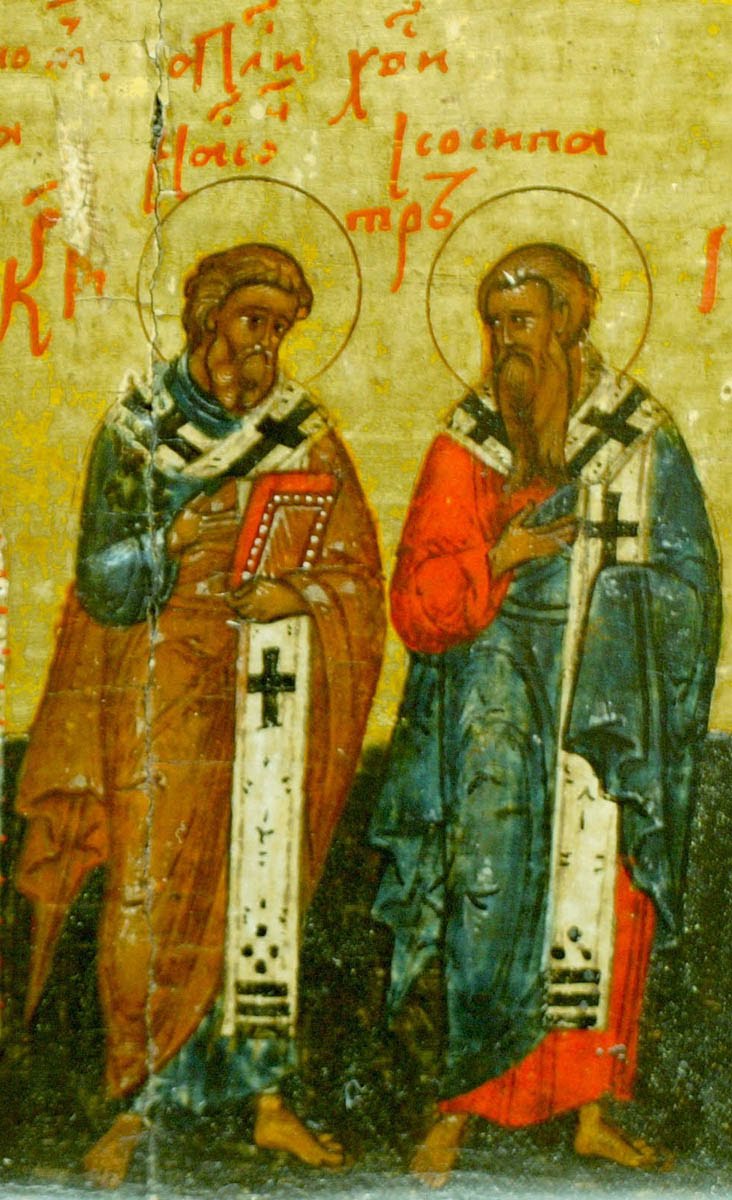