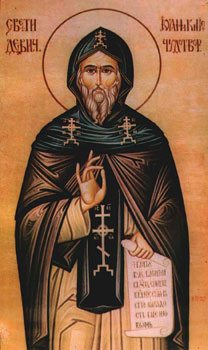 He was a Serb from Zeta. As a young man, overcome with love for Christ, he left his home and went off to the region of the Ibar, to the mouth of he Black River, to a narrow cave in which, according to tradition, St Peter of Korisa had lived in asceticism before him. But when his fame began to spread among the people, he fled to Drnica and hid himself in the thick forest of Devic. St Janik spent years there in solitude, silence and prayer. According to tradition, the Serbian Prince George Brankovic brought his mad daughter to him, and the saint healed her. In gratitude, George built a monastery in that place known today by the name of Devic. Here are kept Janik's holy and wonderworking relics. In this monastery there lived almost to the present day a famous and godly nun, Euphemia, better-known in the Kossovo region as Blessed Stojna. She entered into rest in the Lord in 1895.