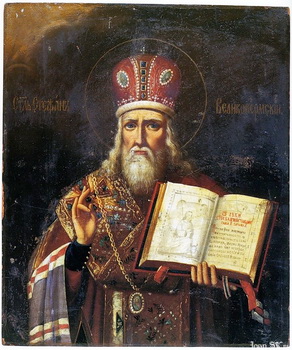 Saint Stephen the Enlightener of Perm, and Apostle to the Zyrians, was born around the year 1340 into the family of Simeon, a cleric of the Ustiug cathedral. He was greatly influenced by his pious mother Maria. Endowed with great abilities, he already displayed an unusual zeal for the service of the Church: in a single year he learned to read the Holy Books and he assisted his father in church during services, fulfilling the duty of canonarch, and also that of reader.

The young saint received monastic tonsure at the Monastery of St Gregory the Theologian at Rostov. The monastery was famed for its fine library. Since St Stephen wanted to read the holy Fathers in their original language, he studied Greek.

In his youth, when he had assisted his father in church, he frequently spoke with the Zyrian people. Now, having been immersed in the rich culture of the Church, St Stephen burned with a desire to convert the Zyrians to Christ.

To facilitate the enlightenment of the Zyrians, he compiled an alphabet of their language and translated some of the Church books. For this pious work Bishop Arsenius of Rostov (1374-1380), ordained him to the rank of hierodeacon.

Having prepared himself for missionary activity, St Stephen journeyed to Moscow (1379) to see Bishop Gerasimus of Kolomna, who then oversaw the affairs of the metropolitanate. The saint implored him, "Bless me, Master, to go into a pagan land, Perm. I want to teach the holy Faith to the unbelieving people. I am resolved either to lead them to Christ, or to lay down my life for them and for Christ." The bishop joyfully blessed him and ordained him as a hieromonk. He provided him with an antimension for the altar table, holy chrism and service books, and Great Prince Demetrius gave him a document of safe passage.

From Ustiug St Stephen made his way along the North Dvina River up to the confluence of the Vychegda into it, where settlements of the Zyrians began. The proponent of faith in Christ suffered many toils and struggles, deprivation and sorrow, living among the pagans who worshipped idols "with fire, water, trees, a stone and golden woman-figure, and shaman, and wizard, and wood."

Father Stephen was sad to see that the Zyrians continued to worship a "sacred birch tree." Immense in its thickness and height, the birch tree grew on an elevated spot. The Zyrians gathered there and brought wild animals there for sacrifice.

St Stephen's cell was not far from the birch tree. He prayed and set fire to the tree in order to end the superstition. The Zyrians, seeing that the tree had been destroyed, meant to kill him. The saint said to them, "Judge for yourselves whether or not your gods have any power, since they are not able to defend themselves from the fire. Can they be gods, when they are so powerless? They have no mind, neither can they see or hear. Your idol could not defend itself against me, a weak man. Are all your other gods so powerless? The Christian God is not like this. He sees everything, knows everything and is Almighty, since He created the whole world and foresees everything. How good He is, particularly to those who know Him! I desire only what is good for you, to bring you to the true God. He will love you and bless you, when you sincerely begin to honor Him." On the site of the "sacred birch tree," St Stephen built a church in honor of the Archangel Michael, the vanquisher of the spirits of darkness.

The newly-baptized Zyrians themselves began to remove that which they once worshiped. They cut down sacred trees, they destroyed idols, and they brought to St Stephen the rich gifts set aside for the pagan sacrifices. He told his Zyrian helper Matthew to throw everything into the fire, except the linen cloth which was used for foot wrappings.

But things came to a head among the Zyrians after St Stephen got the better of their chief priest Pama, who rose up against the spread of Christianity. The pagan priest entered into a debate with St Stephen. "Christian, you have only one God," said Pama, "but we have many helpers on the land, and in the water, granting us good hunting in the forests, and with its abundance providing food and pelts to Moscow, the Horde and faraway lands. Our gods reveal to us the magic mysteries, inaccessible to you."

St Stephen answered that the true God is one; the Almighty is one, but experience has proven that the idols are powerless. After a lengthy dispute the pagan priest Pama challenged St Stephen to pass through fire and water in a test of faith. St Stephen humbly replied, "Great is the Christian God. I accept your challenge."

Pama, however, lost his nerve and entreated the saint to save him from certain death. "You are witnesses," said St Stephen to the people "how he wished to resolve the dispute about faith by fire and water, but he does not wish to be baptized. Who has regard for Pama now? What is to be done with him?"

"Let the deceiver be put to death," the people said, "for if Pama is set free, he will make mischief for you." "No," the saint replied, "Christ has not sent me to hand anyone over to death, but to teach. Since Pama does not wish to accept the saving Faith, let his stubbornness punish him, but I will not." Pama was banished. In thanksgiving for his victory over the chief pagans, St Stephen built a church in honor of St Nicholas at Vishero. After this, the saint's preaching of Christ was more successful.

In 1383, St Stephen was consecrated Bishop of Malaya Perm [Lesser Perm]. Like a loving father he devoted himself to his flock. To encourage the newly-converted, St Stephen opened schools adjacent to the churches, where they studied the Holy Scriptures in the Permian language. The saint supervised the instructions, and taught them what they needed to know in order to become priests and deacons. St Stephen taught several of his students how to write in the Permian language. The saint built churches, in which he placed Zyrian priests, and services were conducted in the Zyrian language.

St Stephen translated the HOROLOGION [Book of Hours], the PSALTER, and other liturgical books into the Zyrian language.

During a crop failure the saint provided the Zyrians with bread. Many times he protected them from the trickery of corrupt officials, gave them alms, and defended them from the incursions of other tribes, interceding for them at Moscow. The fruit of his efforts and good deeds came in the conversion of all of Perm to Christianity. This great deed was accomplished by his strength of faith and Christian love. The life of the saint was a victory of faith over unbelief, of love and meekness over malice and impiety.

There was a touching "meeting in absence" of St Stephen of Perm with St Sergius of Radonezh, occurring in the year 1390 as St Stephen journeyed to Moscow on church business. St Stephen fervently loved the Radonezh ascetic and very much wanted to pay him a visit, but had no time to do so. Ten versts from the monastery of St Sergius, St Stephen turned in the direction of the monastery and with a bow he said, "Peace to you, my spiritual brother!"

St Sergius, who was eating a meal with the brethren, stood up, made a prayer and, bowing towards the direction where the saint rode, answered, "Hail also to you, pastor of the flock of Christ, may the peace of God be with you!"

The deep spiritual connection of St Stephen of Perm and St Sergius of Radonezh is recalled even today in a certain prayer recited each day in the trapeza.

In the year 1395 St Stephen again went to Moscow on affairs of his flock, and died there. His body was placed in the Church of the Transfiguration in the Moscow Kremlin. The Zyrians bitterly lamented the death of their archpastor. They earnestly entreated the Moscow prince and the Metropolitan to send the body of their patron back to Perm, but Moscow did not wish to part with the relics of the saint.

The glorification of St Stephen began already at the beginning of the fiftenth century. The Life of the saint was written soon after his death. The hieromonk Pachomius the Serb composed the service to him, with the hieromonk Epiphanius the Wise, who was a disciple of St Sergius of Radonezh. He also knew St Stephen and loved to converse with him.

Aflame with divine desire from childhood,
You took up Christ’s yoke, O wise Stephen.
You sowed the good seed in a hardened people grown old in unbelief
And gave birth to them in the Gospel.
Celebrating your memory, we pray to you:
Entreat him whom you proclaimed
That our souls may be saved!

You were found to be a hierarch to those who sought you not.
You freed your people from idols and brought them to faith in Christ.
You shamed the sorcerer, Pansotnik, and became first bishop and teacher of Perm.
Therefore the faithful hymn you with thanksgiving, crying: Rejoice, O wise teacher Stephen! 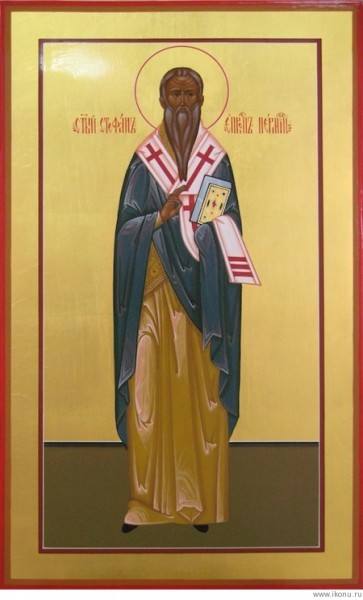