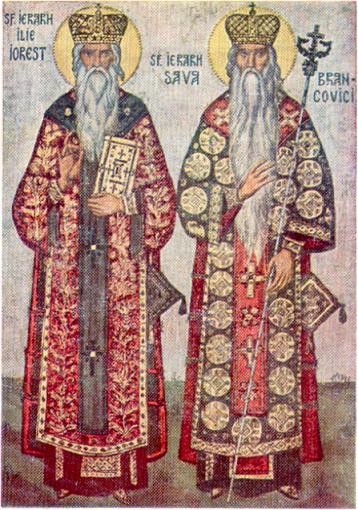 Saint Sava was born into an old Serbian family from Hertzegovina who took refuge near Arad in Transylvania at the end of the sixteenth century. The future saint was born at Inau around 1620, and received the name Simeon in Baptism. His parents were named John and Maria.

At first he was tutored at home, then he traveled in Hungary, Serbia and Bulgaria. After visiting his uncle, Metropolitan Longinus, at the Comana Monastery south of Bucharest, he decided to stay there to complete his education. The Metropolitan tutored him in religious and secular subjects. After completing his studies, Simeon returned home and got married at the age of thirty. He was ordained to the holy priesthood, but his wife died soon after this. Not long afterward, his mother became a nun. Fr Simeon continued to serve in the Lord’s vineyard for ten years, converting many Moslems, and reconverting Christians who had embraced Islam..

In 1656, a council of clergy and laymen at Alba Iulia elected the widowed Fr Simeon as Metropolitan of Ardeal in Transylvania (western Romania). He traveled to the cathedral in Tirgovishte in Wallachia, and there he received monastic tonsure with the name Sava. On September 16, 1656 he was consecrated as a bishop by Metropolitan Stephen of Wallachia.

St Sava’s episcopal service was plagued by the missionary activities of Calvinists who tried to convert the Orthodox, and who were supported by the princes of Transylvania. In addition, frequent wars threatened the stability of the area during his first years as Metropolitan. The saint, however, proved to be a faithful defender of the Church.

In the face of these difficulties, St Sava set up a print shop and published service books, manuals of instruction for clergy and laity, and a catechism. He also preached sermons based on the writings of Fathers, and using the Lives of the Saints as models for his flock.

St Sava was driven from his See between 1660-1662 because of his labors to strengthen his flock in Orthodoxy. Although he returned to his duties and served without interruption until 1680, Metropolitan Sava was often harassed because of his refusal to cooperate with the prince and the Calvinists.

In 1668 Metropolitan Sava journeyed to Russia seeking help. This led to his persecution by Prince Michael Apaffi and Protestant leaders, who did not appreciate his fierce opposition to their attempts to convert the Orthodox of Transylvania to Calvinism. In February of 1669 the prince issued a decree imposing many duties and restrictions on him.

St Sava convened a council at Alba Iulia in 1675. Among other things, the council decided to celebrate the Liturgy in the Romanian language rather than Slavonic, and to improve the spiritual and moral life of the clergy and laity.

In 1680 the Calvinist Superintendent of Transylvania made false accusations against St Sava and had him put on trial and thrown into prison. This effectively ended his career. Old and sickly, the Metropolitan endured three years of cruel torture in the Blaj Castle prison. He was finally released through the efforts of Prince Sherban of Wallachia, but died of his injuries on April 24, 1683.

St Sava served as Metropolitan for almost twenty-five years under very trying circumstances. In spite of this, he defended his clergy and his flock against the activities of the proselytizers. Since he endured all things with Christian patience, even the bitter sufferings to which he was subjected at the end of his life, St Sava is regarded as a martyr and a Confessor of the Orthodox Faith.

St Sava was glorified by the Church of Romania on October 21, 1955.